I have been on a bit of a sewing roll recently and have another finished item for my wardrobe: 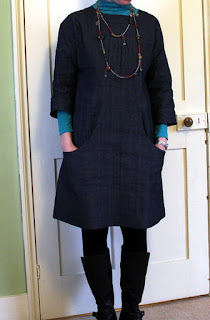 This is the denim I bought at Goldhawk Road during half term. It is quite crisp and a bit thin, but I liked its dark colour. I cut the facings and pockets from a piece of Liberty fabric, that I have had for some years, to try and reduce bulk in some areas. 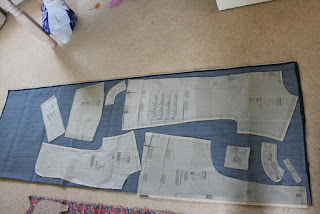 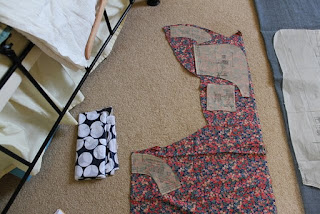 I also decided not to interface any of the pieces that require it, due the crispness of the denim on its own. I'm pretty sure that with a bit of washing the denim will soften up, so will have to wait and and see if the interfacing decision was the right one!

I have interspersed the sewing of this with sewing the muslin for Husbands shirt. He has tried it on and there don't seem to be any problems with the fit, so it is going to be a 'wearable muslin' and hopefully one of his Christmas presents. He did originally try it on with with his eyes closed, but that didn't seem to work very well, and he did ask if he could wear it on Christmas day! A post for another day.

The construction of this went well, probably because I have made it before, the only slightly different thing I did was to take in the seams either side of the front panel. This was to reduce poofiness in the stomach area - the crispness of the denim made it stick out rather obviously. 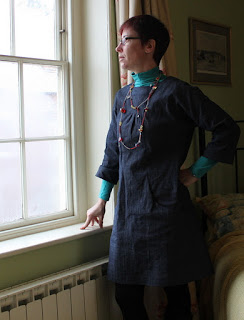 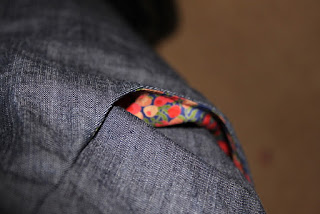 I bought 3 pairs of tights today to change up the look - red cable knit, teal and on Youngest's insistance leopard print!

My last two projects have been blue, as is Husband's shirt, so my sewing space has become somewhat untidy. I normally have a good old tidy up after each project, but have let it slide with these being all the same colour. I still have some work to do on the shirt (buttonholes), but had a bit of a hoover this morning, and feel that I can now go back in there and carry on!
Posted by Tamsin at 18:14