I made a new top last week. 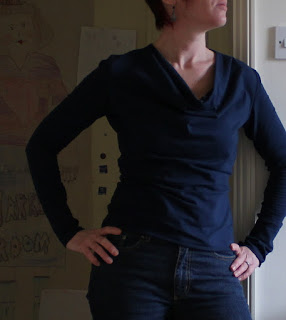 I was looking at the Burdastyle site the week or so before, and saw that Melissa of Fehr Trade had put up alot of her projects. I clicked through and read about loads of her projects. There was one top of hers that I particularly liked, from a magazine called InStyle. I love cowl neck tops, and had been thinking I might try and alter a straight forward t-shirt type top to have this style of neckline. Having seen this top I decided that I didn't need to bother (not yet anyway!) I also really liked the super long sleeves.

I ordered the magazine, which took less than a week to come, then put off doing anything whilst I continued to prepare for the disasterous table top sale. Once that was out of the way I wanted something relatively simple to try, so I traced this out one morning last week when I had a daughter off sick. She was very interested in what I was doing and much better for her to help/watch me than slump in front of the TV. I had a minor panic when I realised that I didn't know whether to add seam allowances or not and I couldn't find anything in the magazine to tell me. I emailed Melissa and she very promptly replied that I did - Thanks Melissa!

That evening I chose the material from my small collection of jerseys from Goldhawk Road, and decided on a navy/french navy piece, which I think is a viscose jersey: 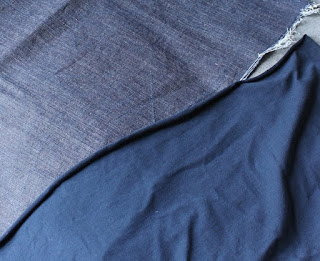 Melissa said in her post that she made her top in an hour, and I can see how this can be done, but this is the first all jersey peice I have made (rather than chopping up old t-shirts), so I took my time. I cut out, followed Melissa's tutorial for a neat finish on a cowl, and did the side seams in one sitting, I really struggled putting in one sleeve in a second sitting (probably due to a couple of glasses of wine and sewing too late in the evening). I then managed to get the second sleeve in without too much drama, and finished of the hems in a third sitting. I overlocked the hem of the sleeves and body, but I wasn't sure what else to do with them. So for me this was quite a quick make...

When I appeared wearing it on Sunday, my girls though it was something I had bought (as did my mother -in-law when she saw it). 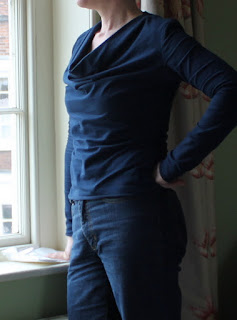 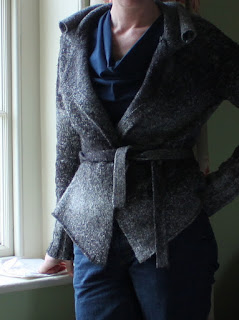 The pictures are all a bit dark. It seems quite hard to a decent indoor photo at any time of day at the moment. In the last photo, I am wearing a RTW cardigan that I bought some time ago and for some reason the collar rolls up after I have worn it for a while. This is clearly seen in the photo - is there anything I can do to the collar to stop it doing this?
Posted by Tamsin at 10:48