I made my first version of this top earlier this year, in a rather slinky sludge coloured jersey.  I really liked the style and was sure I would make it again. I found a suitable fabric during Rachel's epic meet-up in London in April:
I thought that it would be perfect for an Autumn version.  The top was a long time in the making. I had all the bits to make this but couldn't quite find the oomph.  Over the summer we spent a few days with my sister-in law in Norfolk. Whilst the kids were enjoying various water based activities, which I don't enjoy, I finally cut out this top.  My S-i-L has a lovely long dining table and I had the foresight to bring nearly everything I needed, plus tracing paper and the Burda mag so that I could trace off some other patterns.

When laying out the fabric and pattern pieces I realized that I hadn't had the foresight to buy the right quantity of fabric. However..... I did manage to squeak all the pieces out by cutting the sleeves with the stripe running down the sleeve instead of across.

As you can see it is an interesting look.  I am not entirely convinced, but my girls said it looked good. You can't see in these pictures, but I haven't hemmed the sleeves. The only way I could fit them on was to use the selvedge as the edge of the sleeve - it has a slightly fringed look.
I shortened the body again, but not as much as last time, although I think I am wearing different jeans with slightly different pocket placement, so it's hard to tell. 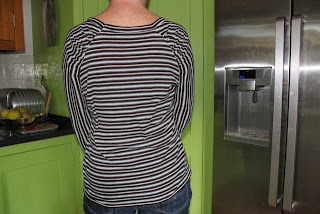 As this fabric was ribbed, it seemed to stretch during sewing.  It seems pretty big all round. 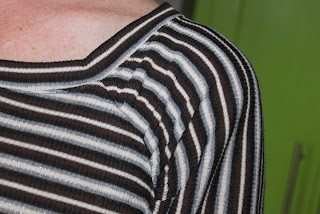 It is hard to tell, but the silvery grey stripe is actually sparkly silver.  The colours are very 1970's to me, having been brought up in a house that was decorated in shades of brown, yellow and mustard, with big dark brown corduroy Habitat sofas that were impossible to get out of! It also makes me think of Cagney and Lacey for some reason.

I don't know what the fibre content is, but it feels very man-made. I have worn it several times and I feel simultaneously a bit hot and a bit cool and clammy - which also reminds me of the 1970's. I made it for Autumn, but we seemed to have skipped through that quite quickly, so I will continue to wear it, albeit hidden under another layer of clothing.