I have seen this dress by Kitschy Coo popping up around the blogosphere for a while now. The dress started as a pattern for children, but Amanda the designer had so many requests for an adult version, she spent a considerable time drafting a version for us grown-ups! I particularly liked a few that were on the Lady Skater dress tour, this one from Cirque du Bebe, this from Emmyloubeedoo and of course all three dresses from Lladybird. Lastly and most recently I saw this dress by Handmade Jane, which is my current favourite, you'll see why in a bit.

I finally got around to buying the download a few weeks ago and spent a happy evening piecing it all together. I actually quite like doing this - downloadable patterns were how I got back into sewing whilst the family and I were living in New Zealand a while ago.

I was looking for an easy dress that would be easy to wear in winter.  I am a bit bored and cold wearing jeans and tops all the time, so I thought a warm winter dress and wooly tights might be just right. I choose a dark teal/petrol colour of a fabric I have used before here and here - I think it is ponte.  It wears well, sews well and comes in a range of lovely colours.  My only slight problem with it is that it bobbles/pills quite quickly. I have one of those nifty bobble removers, but need put new batteries in it...

Anyway, back to the dress.
I cut a size 4 going on my high bust measurement which seems to fit perfectly.  I followed most of the instructions, including the use of clear elastic in the shoulder and waistband seams. I wasn't sure where I would find clear elastic, but to my surprise, John Lewis had it in packs of 3 metres.

I had bit of a brain freeze working out the neckband instructions -  there didn't seem to be enough of the band to go round the whole neck - and I tried several times. I ended up pinning one end of the neckband to the open shoulder seam and just pulling it tight as I sewed round the neck.  This left me with a small excess of neckband, which I just trimmed off - after checking that it looked ok from the right side. On previous knits I have secured the neckband seam allowance with a zigzag, but this time I tried using a straight stitch, but longer than normal, which has worked fine and looks better on the right side
I also followed the instructions to check fit as I went along as this has been an issue in the (very distant) past. I basted it together and found that the waist probably needed moving.  As it was, the waist was neither on my true waist nor my high hip. I decided to raise the waist a couple of inches/5cms to my true waist level, but having worn it a couple of times I rather think I should have lowered it to my high hip. I am sooo unused to having things at my true waist, it just doesn't feel quite right.
Having taken quite a wedge out of the bodice, the skirt is a bit shorter than I would normally go for, but as I will be wearing it with tights or leggings (if I ever get round to making some that actually fit) I don't think that will be too much of a problem.

I while ago I bought myself a twin needle to try and improve the finish on my knits.  I tried it on my previous knit make without out success - the machine kept eating the fabric and when I tried my usual trick of putting tissue paper underneath the fabric, the finish was terrible.

I very carefully tested it on a scrap of the same fabric before trying it on my dress. It worked! I was very excited - probably a little more than than was strictly needed, and ran downstairs to show Husband, who made all the right appreciative type noises.
Also when sewing my hem I used the aptly named 'wonder tape'. This is double sided narrow sticky tape that... dissolves in the wash!  I used it to 'pin' the hem up before I twin needled it and it was so much easier than dealing with pins all the way round.

Over all, I think this is a success. If I make it again I will have to think carefully about where I want the waist to hit, but other than that I am very pleased.  When I wore it the other day my friend didn't realise that I had made it - which is always nice!

And to finish off, some twirling... 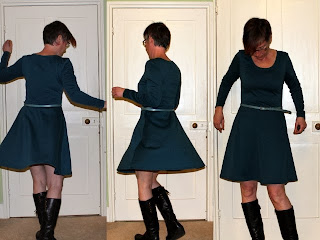