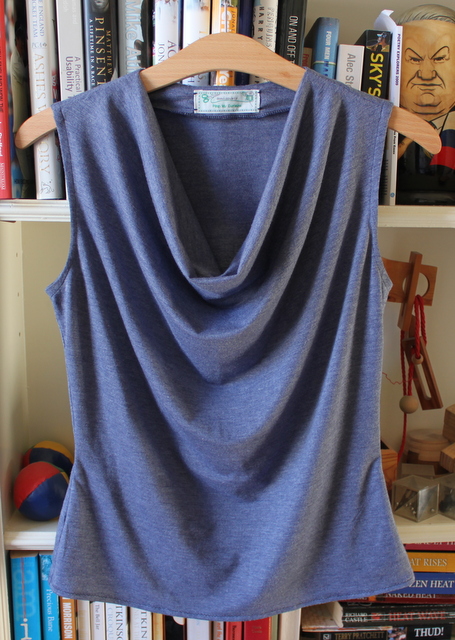 I made this top last week to boost my summer top selection.  Whilst I have sewn a lot of tops over time (more than anything else), they mostly seem to be long sleeved/cooler weather tops. 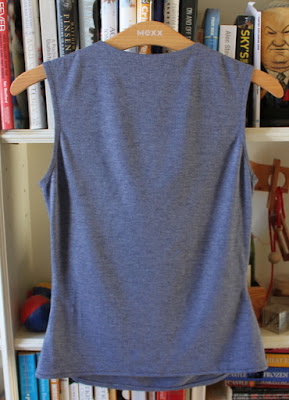 This is another version of the MyImage Cowl neck top from the Autumn/Winter2012 magazine. I left the sleeves off again and did pretty much the same as I did for my last sleeveless version. I got a new sewing machine for Christmas (lucky me!) so everything I have made since has been with this machine.  I found a great stitch on my old machine when I did the hem on my black version, but there doesn't appear to be the same/similar stitch on my new one, so I just did a zigzag stitch. 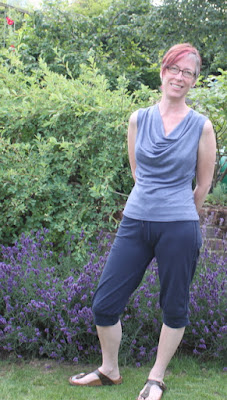 Now that I have made this top a few times (2 long sleeved, 2 sleeveless) I find that it is a very quick and satisfactory make. I *love* the cowl neck and the way that it fits at the back. I think the back piece is marginally slimmer than the front piece, which gets rid of some of the pooling of excess fabric that I sometimes get. 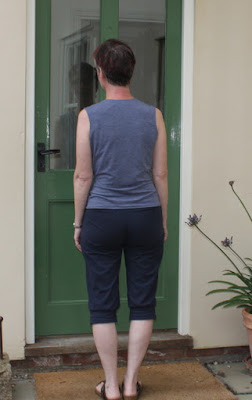 I have linked to it before, but I use the tutorial from Melissa at FehrTrade for the neck line finish.

The long shorts/cropped trousers that I am wearing in these pictures were refashioned in MeMadeMay. A few years ago I bought some long tracksuit trousers that were too long. I then shortened them, but it was too much and they looked ridiculous.  I put them away to deal with later and promptly forgot all about them. In my effort to go through some of my stuff during MMM I found them again and very quickly sorted them out. I put them on, pinned roughly where I wanted to cut them and checked in the mirror before I cut them.  I used the cut-off section of each leg to create a cuff using the calf band pattern piece form the Hudson pants, and ended up with a quick pair of lounging/casual trousers.  I was a bit concerned that even with my careful checking of where I cut the legs, the finished seam attaching the cuff might be a bit irritating as it is right in the crook of my knee. 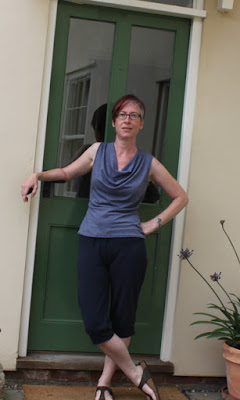 Happily, having worn these quite a few times now, they are very comfortable. The fabric is incredibly soft so the seam is not irritating at all.