Also on my sewing table recently, has been a top for Eldest. Some time ago (probably this time last year), she saw a leopard print top the she liked, but wasn't available in her size.  She then saw some leopard print jersey in John Lewis for something like £22 a metre, so I found something 'similar' at the Fabric Fandango: 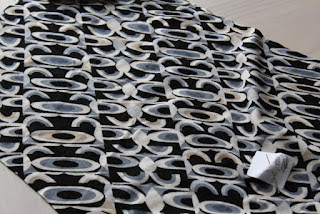 She really liked my New Top, tried it on and it almost fit! The neckline was very similar to the original  top she had seen. I recently traced the smallest size on the pattern sheet - only one size smaller than my top. I cut it out last week, possibly forgetting to add the seam allowance on the back neckline.... hopefully not.  I followed Fehr Trade's tutorial for sorting out the neckline again. I had to do the shoulder seams a couple of times to get it to look right, but I finished the whole thing a couple of nights ago. Eldest was pleased with it when I asked her to try it on, but a bit concerned about the rather low front, hence the white t-shirt underneath.

I was a bit cheeky and tried it on myself... I'm not sure I want to let her have it now!

On the intended recipient: 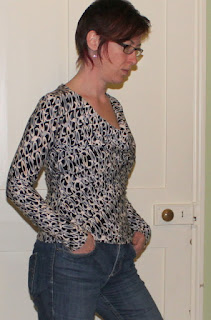 (I have realised since I wrote the New Top post, that I got most of the details of the top wrong.  It is in fact from MyImage, topM1152 from the fall/winter 2012 issue).
Posted by Tamsin at 21:07