I was very interested to come across the Thread Theory website and blog recently. They are a small husband and wife team in Canada, who started earlier this year producing modern patterns for menswear. Most of the patterns for men in the big 4 pattern companies seem to be pj's, hospital scrubs or the odd shirt. Whilst I have made a couple of shirts and pj's are useful, hospital staff scrubs are not something that Husband has much need for.

I have seen some lovely versions of the Strathcona Henley around the Internet and really enjoy sewing for Husband so I downloaded this fairly quickly. It is described as a slim fitting style tee/long sleeved Henley, which concerned me briefly but Husband's measurements fitted into the largest size of the pattern. 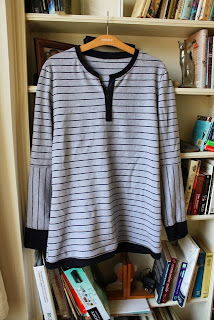 Last time we were in London, we went to Goldhawk Road and picked up some heavy-ish jersey/sweatshirt type fabric in a grey and navy stripe, for a wearable muslin. We ended up with the last metre and a half on the roll which seemed fine according to the fabric requirements.

Unfortunately after washing the fabric it shrank quite considerably, which gave me somewhat of a headache when it came to the cutting layout. I managed to squeeze the main pieces on but had to divide the sleeves in two (along the lengthen/shorten lines) and then cut the neckband, cuffs, placket and hem band out of a navy jersey that I got from Rachel's epic meet up in April. It was quite a quick make and would have been even quicker had I not needed to cut new cuffs and hem band. The pattern directs you to cut these pieces with the stretch going down the piece rather than width ways, which was quite frustrating when trying to stretch something to fit when it really doesn't want to stretch!

I used both my sewing machine and over locker and managed to use my twin needle successfully again.
I am very pleased with the result, however it is a fraction too small and whilst Husband is currently on a mission to get fitter and slimmer, he feels a little self conscious in something so tight. I think it needs a centimetre or so on the side seams and maybe a little more on the bicep.

Husband also noted that the cuffs are very deep, so he would like them at probably 2/3rds depth.

When I was pondering my cutting layout I expressed my frustration to Husband, who immediately searched online for some sweatshirt fabric and purchased some more and made sure we had enough to allow for shrinkage!

I will be making this again, but the once I have washed the fabric, it is going in the queue behind a number of other items, some of which are for Christmas!

Some other great versions of this Henley are:
Blogless Anna
Four square walls - there is great info here on the construction  and cutting the neck & cuffs with width ways stretch, which I wish I had remembered before I cut mine out!
Huff makes stuff here and here - very inspiring posts on sewing menswear for her husband

I think this is the quickest anything has ever made it from the sewing machine to the blog!
Posted by Tamsin at 11:33