While I have been putting off tackling my muslin, I decided to do a couple of smaller projects. Eldest has been growing again and a funky little dress that we bought a couple of years ago was only suitable for wearing with trousers/leggings underneath.

I had a look at the dress and decided that it would not be too hard to make it into a skirt. I unpicked the red binding that went round the outside of the neck, as far as each side seam. I then cut off the small piece of fabric that had made the Halter part of the dress.

After carefully, pinning the red binding over the new cut edge I sewed it with a small zigzag on my sewing machine. I left a gap where the binding met the original stitching and ran some elastic through the channel in the binding. I'm not sure I needed to do this for Eldest, but I then did exactly the same for a matching dress for Youngest, which did need the elastic. Not a huge refashion, but enough to prolong the life of the dresses.

As usual, I forgot to take pictures of any of the stages of doing this, but I did think to take before and after pics! 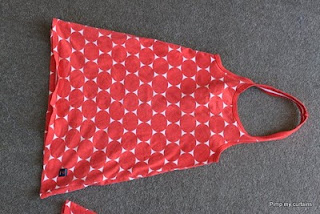 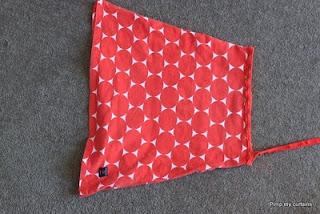 I have yet to get a picture of the skirts being worn.
Posted by Tamsin at 22:21 No comments:

I bought some material some time ago from a shop in Timaru that has now closed down. I got it in the shop's final days of trading and got nearly 3 metres of fabric, 8 buttons, lots of thread, a Vogue shirtdress pattern (NZ$1!) and a remnant of a navy and white polka dot fabric, for less than NZ$20: 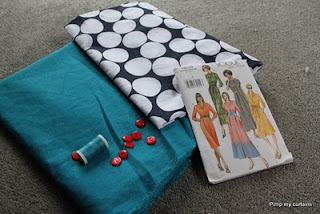 I had fully intended to make the Vogue pattern, but only a few days later I came across the HotPatterns website and fell in love with the Metropolitan Urbanista Coatdress. Having not made dress for years I thought that I would make a muslin, having read about them a lot recently (on the Cupcake Goddess, Sewaholic and Gertie's blogs). I had bought a couple of sheets from a charity shop, which I thought would be ideal.

The HotPatterns pattern pieces are printed on a very stiff paper, so doing a tissue fit would be quite tricky. I enlisted Husband to take my measurements, and these indicated that if there was such a thing, I would be a size 11. I traced off the size 12 with the thought that I would take it in if necessary. 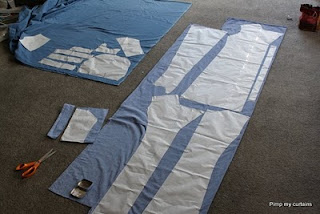 I then very carefully cut out the pattern pieces from the fabric (I have been known to be a bit slapdash in the past) and started to piece it all together. 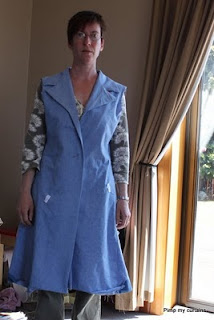 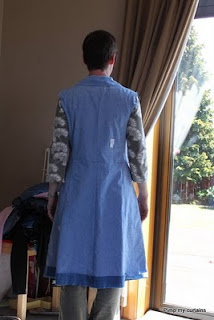 Even trying this on over my clothes (to avoid constant stripping of in the front room) I could see that this was too big. Just to make sure, I tried it on properly: 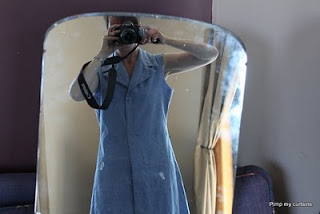 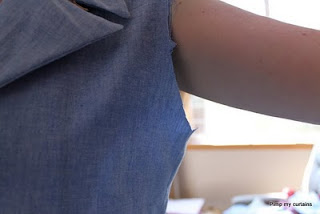 At this stage I took in the seams where the side joined the front and the back, which looked better, but then I realised that I would need to change the sleeves too. I found a very detailed review of the pattern on PatternReview and having clicked through to her blog, got some advice from Michelle at Cheap and Picky. Following her advice I made the pleats bigger which seemed to help. I also got some similar advice from Sunni at Cupcake Goddess.

Having adjusted the seams on the body, the pleats, and the under arm seams on the sleeve I think the dress is still slightly too big and that the shoulder seam is sitting too low. 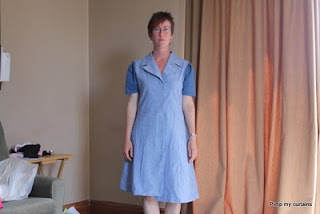 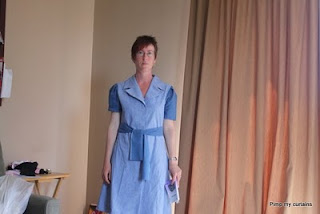 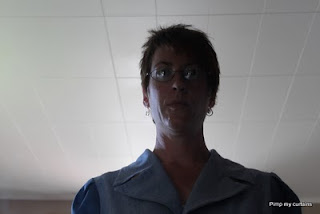 This last picture is oddly angled to try and show the shoulders being too low. I did put pins in where I thought the shoulders seams should be, but they haven't shown up in the photo. I'm not actually sure if the style of dress is really me.

Having worked this out, I gave up in a bit of a grump. Having taken a step back and thought about it some more, I think I might need to adjust the centre back seam to see if that helps with the shoulder. I haven't done any sewing on this for a couple of weeks now and I'm a bit nervous about starting it again, so I have been doing other things.....
Posted by Tamsin at 05:47 1 comment:

I mentioned recently that we had been fabric shopping when we were in Wellington, and I finally got round to taking some pictures of what we bought. I forgot to take a picture of the first fabric uncut, but you can see it made up in my previous post.

First up is the nightie material for Middle and Eldest daughters: 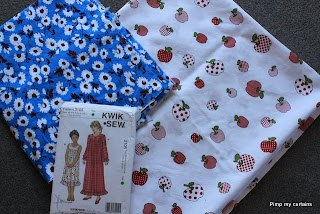 Secondly, the material Husband chose for his shirt. Not sure which view I'm making yet: 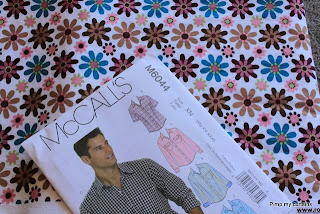 Thirdly, this stripy jersey for a top for me, possibly a BurdaStyle Lydia top, or a HotPatterns top, although I don't think I have enough for that. It is a different colour of one of the samples I discussed on an earlier post: 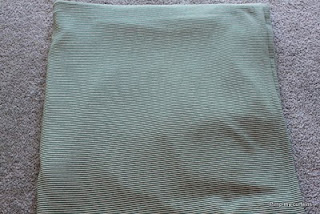 I am currently almost at the end of making a muslin for a dress, which will be my next post. I am not sure when the above projects are going to be made. My muslin is taking foreverahh, and I am planning a couple of other little projects too!
Posted by Tamsin at 01:52 No comments: