Popping in to Backstitch


I have recently been adding quite a lot of new blogs to my reader, one of which was the blog for Backstitch an online fabric and haberdashery shop, run by the very helpful Alice. The first post that I saw was one to say that she was starting a 'bricks and mortar' store - the second thing I noticed was that it was at Burwash Manor. Hang on just a minute I thought, that's not far from here - hurrah for another fabric shop within striking distance!

The next post was a request for applications for a part-time sales assistant. OMG I thought, I'd love to work somewhere like that, but realised very quickly that she wanted people to work at weekends. With my bevy of girls and various commitments, I felt that wasn't a goer for me. Sad face, as Eldest would say.

Backstitch was opening the weekend of 15th &16th of March and initially I didn't think I would be able to visit that weekend. As it happened Husband was out all day on a 'how to teach cycling' course, the girls and I had had a pretty lazy morning and got all the homework out of the way, and it was a lovely afternoon.  I proposed a trip out, expecting a distinct lack of enthusiasm, but they all seemed keen so I bundled them into the car before they could change their minds!

The last time I had been to Burwash Manor was probably 14/15 years ago when Husband and I were deciding what to do with the large garden that came with the house that we had bought. Husband was keen to plant a mixed hedge somewhere in the garden with a view to laying it at some point in the future. As luck would have it the National Hedge Laying Championships were being held at Burwash Manor so we went up with his Mum to have a look. I recounted this to the girls (who weren't that interested!) as we arrived there . If you look closely at the hedges you can see at their bases, the trunks of the bushes and trees woven together.

There are different ways to lay your hedge, depending on where you are in the country, so the hedge above would not be how it is done in Cambridgeshire.

We went straight to Backstitch and were very pleasantly surprised to find it quite busy.  The units at Burwash Manor are reasonably sized and as we walked in, the first thing I noticed was how bright it was, due to the large window that took up the whole side of the shop. All the fabric bolts are beautifully arranged along one wall and we all spent quite a long time admiring and stroking the fabric. Alice has a lovely wide range of linens, perfect for the summer and an extraordinary array of printed cottons. There were also a few jersey fabrics, that weren't quite to my taste, but very reasonably priced - think £8 -£9 per metre as opposed to £18 and more in places like John Lewis.

She also has a great range of patterns from Indie pattern companies such as Thread Theory, Colette, Sewaholic and the new stars of the moment, By Hand London.  I have been eyeing up the BHL Anna dress pattern for what seems like an age - mostly because I felt that after my pattern cutting classes I should be able to draft something very similar. However, I gave in and bought the pattern.

Whilst pondering this, I got talking to a very nice French lady - Hello Nathalie! - and we were discussing which of the patterns we already had and what we would like to get. While flicking through the Sewaholic patterns I paused at the Minoru and said something along the lines of 'oh I have that and material for it but haven't got round to making it'. It turned out that Nathalie had not only made it , but was wearing her version of it, in waterproof fabric no less. It was great to see a real life version of it and it has certainly pushed my version further up my mental sewing list.

I had already said to my girls, that if they were feeling crafty I would consider getting some stuff for them to make things with.  Youngest was keen to to make a pencil case and chose some spotty fabric with matching zip and various trims. Middlest wasn't sure, but was veering towards a cushion with embellishments so she got some fab fabric and embroidery floss. Eldest has recently started her Textiles GCSE course and has sporadically shown an interest in sewing. She is very keen on tops with a Peter Pan collar, and so we ended up with the Colette Violet blouse and some quirky fabric with foxes on for her!

After leaving Backstitch, we pottered around the rest of the shops there, and stopped for a cuppa at the tea rooms. By this time it was towards the end of the afternoon and our table in the sun was pretty chilly, but we had a great afternoon and will be going back I am sure.  I have already recommended the shop to a friend from my cutting class who is pregnant and I had noticed that Alice stocked Megan Neilsen's pregnancy patterns.
Posted by Tamsin at 17:08 No comments:

In playing around just before posting my last post, I seem to have inadvertently clicked on 'apply to blog' instead of the 'lets have a look' button.

So the blog looks a bit different! Not too much though. I have been thinking about making it look a bit more spiffy and colourful recently. I quite like how this looks so I may leave it, but if I have second thoughts I will be asking techie guru Husband if he can help me sort it out. And no, I don't think I have a backup of the original template.

Moral of story - don't try and be clever when really tired.

I used this fabric which, as I said previously, I wasn't 100% sure about: 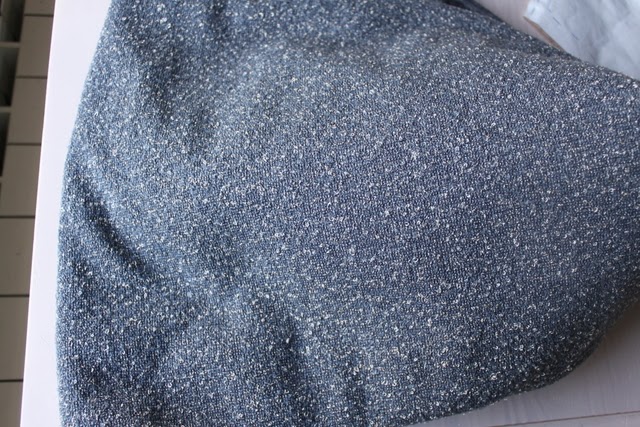 Husband wasn't sure either, he admitted the other day, and was pretty impressed with how it turned out: 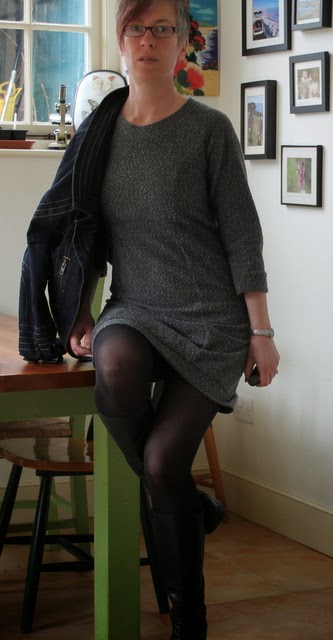 Here are a few shots of different angles: 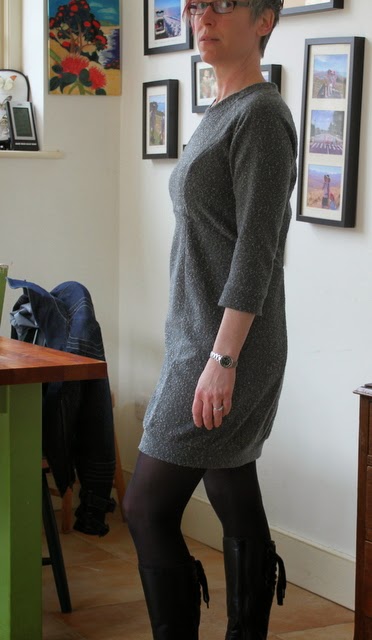 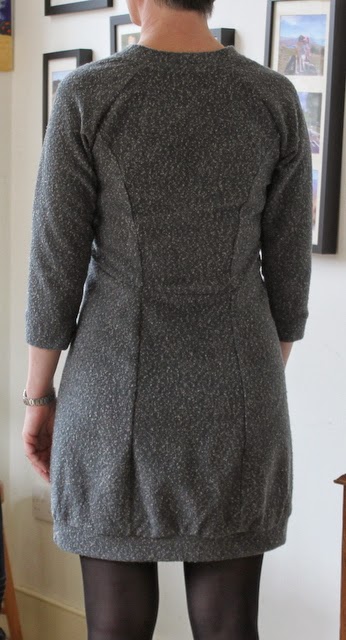 I really like all the seaming - now that it fits better! I mentioned that I had taken in the prince seams at the front and back - I think I must have taken out at least 8-10 centimetres in the bodice.  The skirt seams I took in about a 1.5cm tapering out to nothing just above the hem band. Next time I should probably make at least one if not two sizes smaller and baste it together to check the fit unlike this time where I had to unpick all my overlocking - not something to be recommended! A few days after I did my unpicking, Winnie posted a handy hint for unpicking overlocking stitching - which would have been very useful!

Here I am trying out different poses and a couple of different jackets: 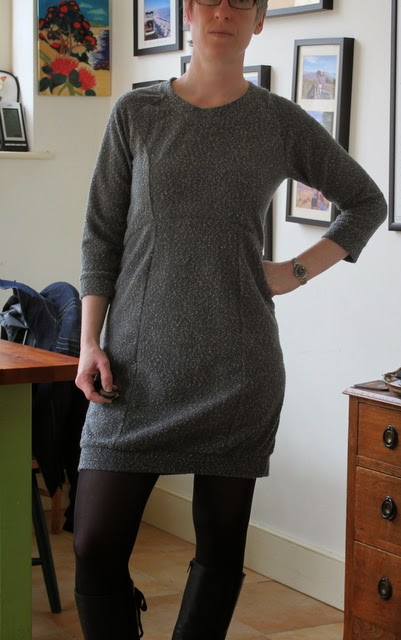 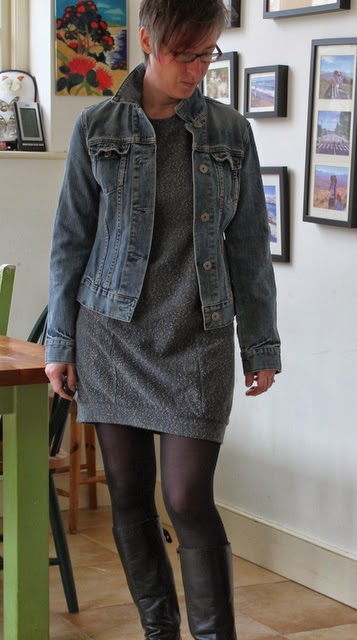 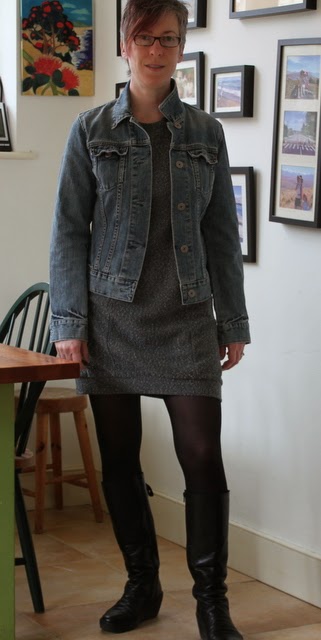 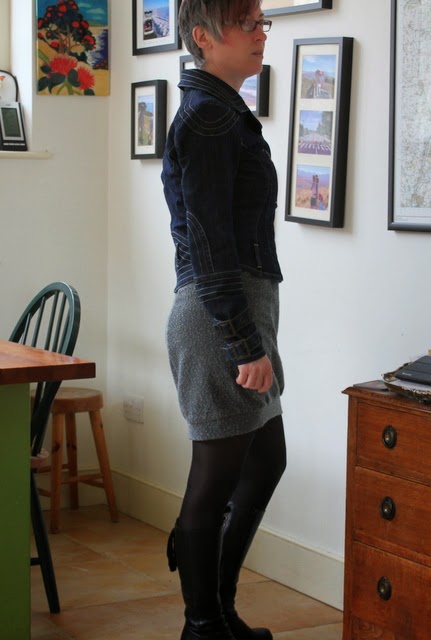 I can't quite get the hang of cropping my pictures so they are all the same size, nor can I stand in the right spot to get both head and feet in the photo, but they will do! The light is generally better here than anywhere else in the house that I have tried.

I have had this finished for a couple of weeks and have worn it four or five times already. It usually takes me a little while to work things into my wardrobe, but not this one! It got the thumbs up from the family (even from Husband who had witnessed the frump disaster) and got several compliments when I wore it for a girls night out recently, which is pleasing. 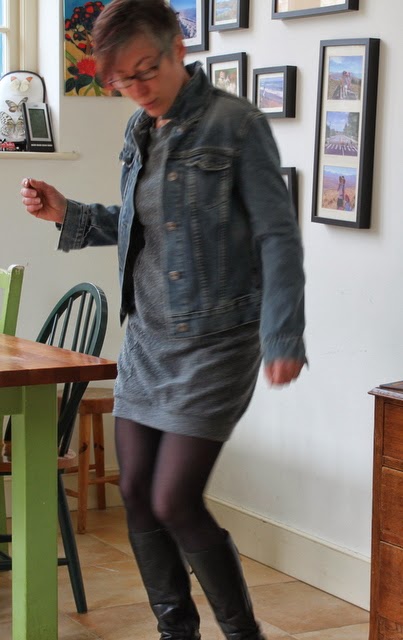 Squares before my eyes

Not long before Christmas I bought this lovely wool blend jersey from Geoff Rosenberg at Trumpingon village hall: 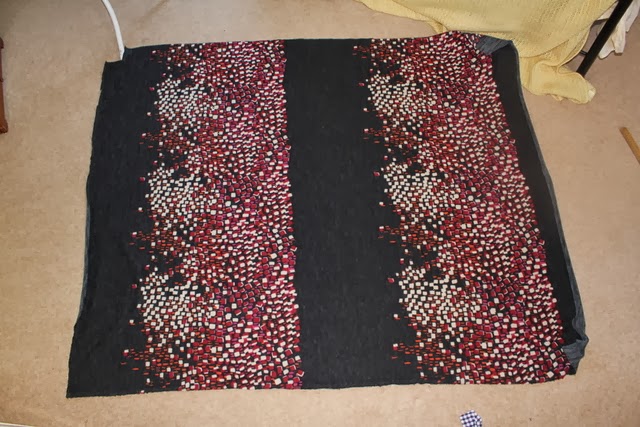 I don't often buy without a plan, but this was lovely and I knew I would be annoyed if I didn't get it.  I got it home and draped it around my dress form for ideas.

There is enough to make a simple dress along the lines of the beige dress I finished the other week. Or another Lady Skater dress with a slightly slimmer skirt. I love the idea of dresses, they seem very practical, just one thing to put on and you're done. However, apart from the beige dress, I don't often wear the dresses I have. I like to be warm, so I would have to layer up with something underneath if I didn't want to put something over the top.

Another thought was to make a biggish drapey top, possibly using the Burda Young pattern that I used for one of my magpie tops. A top would get a lot of wear, but the fabric doesn't actually go with much in my wardrobe so I would pretty much only wear it with skinny jeans (which I appear to be living in at the moment.

Or, a nice warm cowl necked Renfrew - nice and simple and I have made it a few times before. Too many ideas. What to do, what to do?

I went shopping with a friend of mine.We went into Cos where I saw this dress:

and I tried it on: 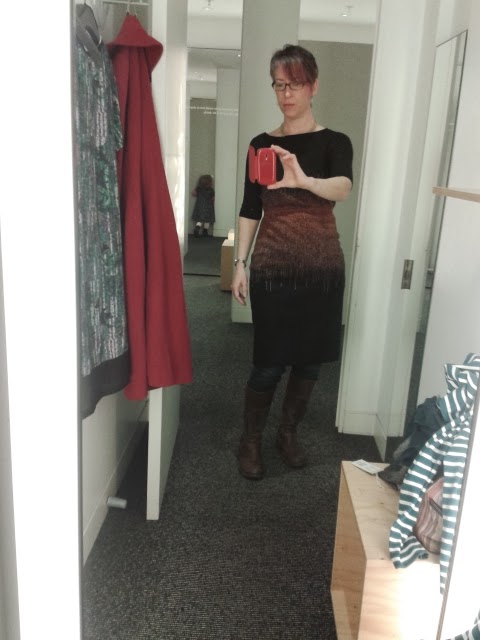 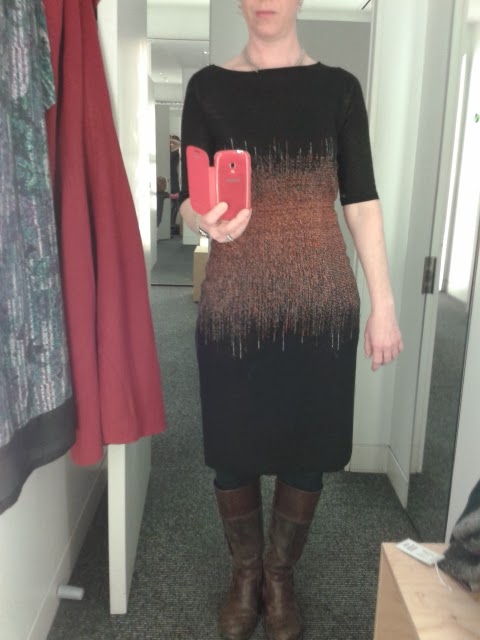 My friend tried to persuade me to buy it, but the fit was a bit off - bit big on the shoulders, the sleeves are a strange length and the waist gathering was a bit high on me.

I love the way the pattern goes up the bodice and down the skirt and I am now trying to work out how I can do something similar to this, with my material.

I would really like to get the squares in the pattern going up the bodice and down the skirt like the Cos dress, but am quite concerned that this might reduce the amount of fabric I would have to work with. To do that would I have to cut fabric at the straight edge of the squares to the left of the top photo, cut the grey strip from the straight edge of the squares to the right of the photo, then spin the right hand side of the fabric round so that the two straight edges meet? Or cut a bodice one way up and a skirt the other way up? I think if I made a dress I might have to line it as the fabric is quite fine.

I could be over thinking this.

I am using this post to try to solidify my ideas for this fabric, but I can't decide and can only see problems at the moment - living up to my self-proclaimed title of Queen of Procrastination!

Having recently spoken to the friend I went shopping with and discussed the merits of dresses versus tops and what would be most likely to be worn, I am veering towards a top. Which makes most of the above unnecessary any way!
Posted by Tamsin at 13:21 1 comment: