Earlier this summer, Husband and I were invited to a wedding.
The groom was one of Husband's many cousins, the second eldest of a family of four boys. I first met these boys when they were teenagers and younger and have seen them grow up into lovely young men.

I wanted to make something for the wedding and had an idea to make a long version of the By Hand London Anna dress. I have made the short version some time ago.  I found the fabric at one Geoff Rosenberg's fabric sales at Trumpington Village hall, Cambridge, for the princely sum of £6 a metre. I think I got 3 metres and it was 160cm wide.  It was a lot of fabric to lay out, and I had great fun trying to work out which way up the motif should go. 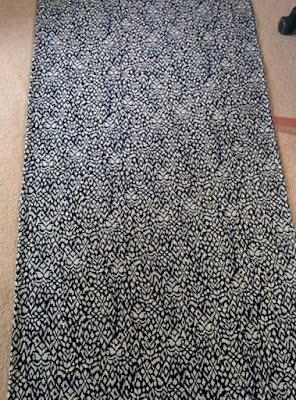 I decided to make the V neck bodice this time around, and was very sensible - I made a toile of the bodice before cutting into the fabric.  I only needed to alter the length of the bust pleats - which I had to do on my previous version. I also decided to have a split in one side. I hand stitched the seam allowances of the split - the stitches disappeared into the fabric pattern really easily.  I realised quite early on that I would have to line the dress and because of the side split decided to do a half lining ie to the top of the split.

When I tried the dress on I noticed that neckline was gaping quite a bit. I am sure the neck had stretched out as the fabric was pretty tricky to handle. I don't think the instructions say to stay stitch the neck, but if I were to make this style again I would definitely stay stitch here. I solved the issue by using some clear elastic thread in the seam allowance between the main body and the lining. I pulled it in slightly, just tight enough to stop the gaping, but not so much that it looked gathered. 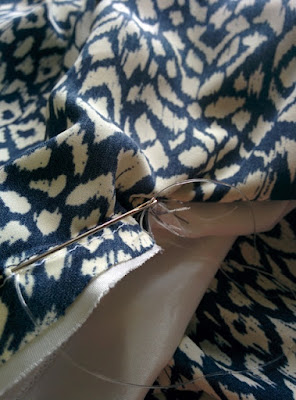 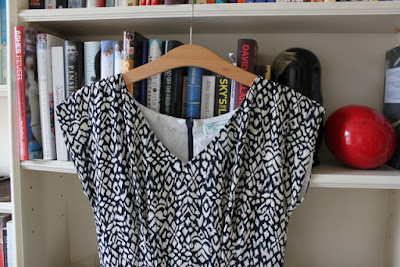 I tried to get one of my girls to take photos before the event, but for some reason they were all of of focus - although this is another fabric pattern that looks out of focus anyway! 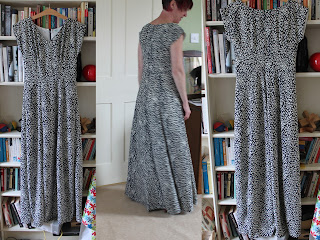 I haven't much else to say about the dress. It is an easy sew and easy to wear, I certainly felt pretty glam wearing it!

So following on from my last post, once the fabric was washed and the jet lag subsided, I started to look at shirtdress patterns.  I narrowed it down quite quickly to two patterns that fitted my vision: Simplicity 8014 and McCalls 6885.  The McCalls was the right shape and had cuffed sleeves and a terrible envelope picture.  The Simplicity won out because it had a yoke, the right sleeves and buttoned all the way through.

I haven't got that many pictures of the construction.  Having cut it out I did a quick baste together to assess the fit which seemed fine - I didn't change anything. At some point I managed to lose the cut pieces and the pattern piece for the sleeve tabs. It was very frustrating, but I had just enough scraps to draw out replacement pieces. I kind of guessed at the size - seemed to work out OK! Really annoyingly, I was having a tidy up the other day as my sewing space is going to occupied by a Spanish exchange student for the next week, and I found the missing pieces - bit late now, but at least I have the proper pattern piece again!! 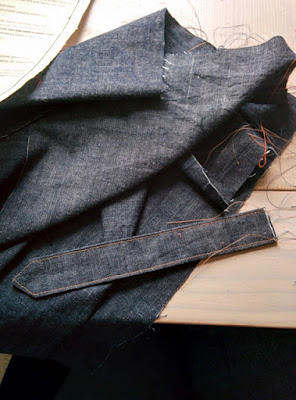 There was lots of top stitching: 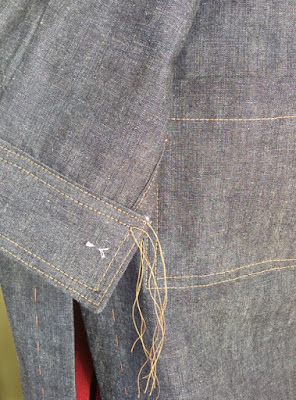 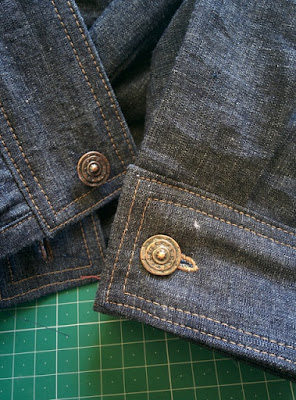 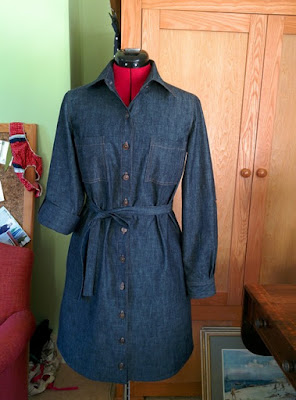 and modelled by me - Slightly out of focus, taken by one of the girls at about 7am, hence the bleary eyes.

and here worn at the Knitting and Stitching Show at Ally Pally at the beginning of October, with Charlotte from the Sewing Bee 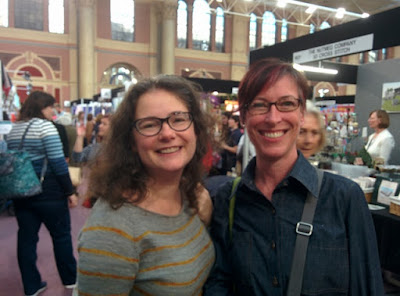 I am really pleased with this dress - it is exactly what I was planning. I love the buttons, it is the perfect length and I love that the fabric came all the way from NYC along with the memories of that trip!

Anyone who follows me on IG may have noticed that my family and I went on a pretty epic holiday this summer, travelling up the east coast of America from Orlando to Richmond VA, Washington DC, New York, Boston and ending in Maine.  This the story of how a recent make came to be....

When flying from Orlando to Washington DC to get to Richmond, my suitcase some how didn't get onto our plane. I was extremely upset by this, not least because I had most of my favourite me made items of clothing in it as well as my tamoxifen medication.  Cue lots of phone calls made by lovely Husband and I finally get my slightly battered suitcase delivered to the house we were staying at 2 days later.  In the meantime, our friends had taken me to Target in order to get a couple of changes of clothes. One of the things I tried on was a chambray shirtdress: 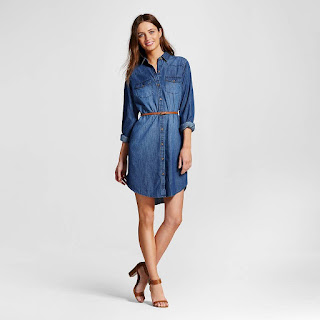 I didn't get it because, as ever with rtw it didn't fit quite right, but I really liked the idea of the style of dress.

Spin forwards a couple of weeks and we are in New York where we met up with Jennifer Weise of Workroom Social. She and I had met a couple years ago at NYLon14and got on quite well, so I got in touch to see if she would like to meet up for a coffee or something. The 'or something' turned out to be a brief visit to the Workroom Social Studio, 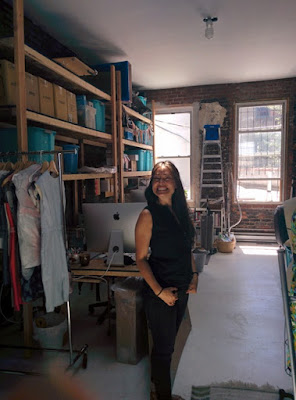 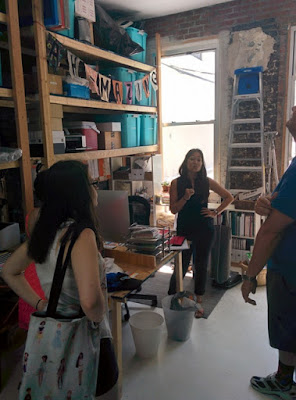 a lovely tour of Brooklyn and lunch at Brooklyn Farmacy and Soda Fountain ending up at Brooklyn Bridge so that we could walk back in to Manhattan. On our tour Jennifer took us to Brooklyn General Store 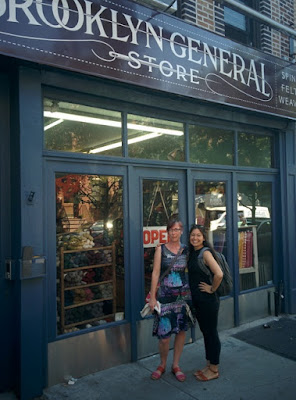 which had a great selection of knitting, sewing and crafting supplies.  Much of the fabric there was not what I was looking for, but they did have a good selection of denims, unfortunately not one light enough for a shirtdress. We had a wonderful time with Jennifer, who very generously gave us her whole afternoon to show us around an area of New York that we knew nothing about and probably wouldn't have gone to if we hadn't met up with her. 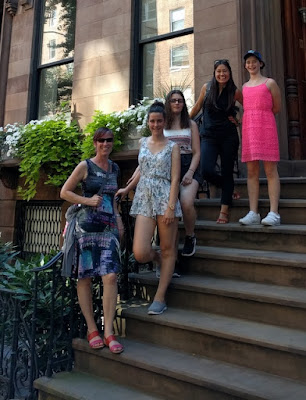 It was reaaalllly hot and humid. 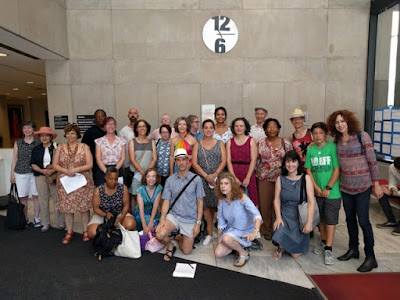 Everyone met at the  FIT museum to see an exhibition called Uniformity.
The exhibition was small but extremely interesting reflecting on how uniforms and fashion influence each other. 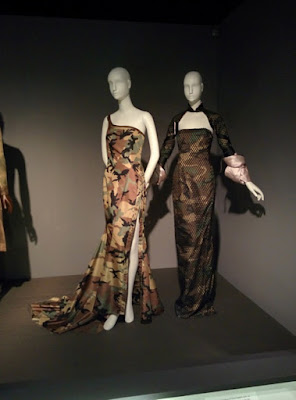 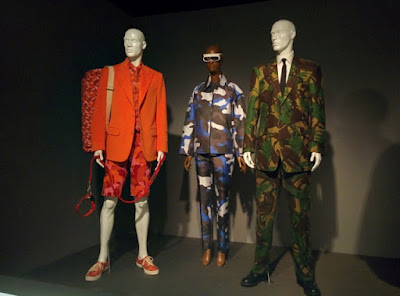 My family accompanied me for this bit, then went and did their own thing for the rest of the day (which mainly involved spending time in air conditioned refreshment places and drooling over KitchenAid accessories in Macy's!).

The rest us of had lunch at a nearby Panera where there was lots of sewing chat and a pattern swap.  I picked up a Vogue pattern. After lunch we split into 2 groups one lead by Peter and the other group, led by Tomasa, was going to Mood fabrics amongst others. 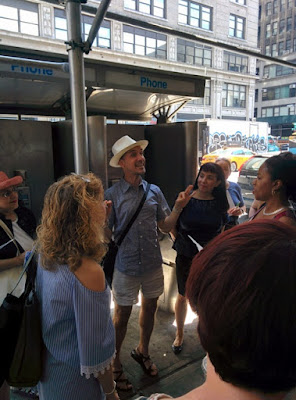 I really really wanted to go to Mood so I stuck with this group. I think we went to Pacific Trim and another trimming shop then we got to Mood.  I did my usual dither around feeling a bit overwhelmed by the choice, then gave myself a talking to and looked for specific fabric including some chambray for a shirt dress. They had three chambray's of the right weight for a dress, but only one in the right colour, so that was easy.  It felt a bit stiff, but I was assured that it would soften up with washing, and it has a bit.  I also bought some white Swiss dot cotton for a summer shirt and some white burn out jersey. 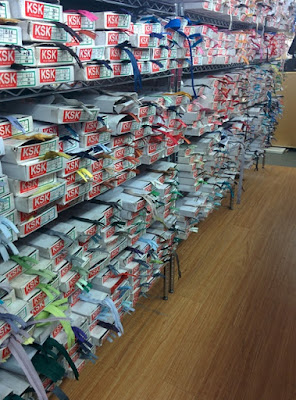 I had a great time being shepherded around the Garment District by these ladies
At the end of the day we all met up again in Bryant Park, where we all showed off our purchases

The fabric had to wait a couple of weeks until we got home, before it met with my washing machine, then I had to decide which pattern to use...

The dress itself will be in my next post.