December already and a Drapey Dress

So, how did it get to be December?? 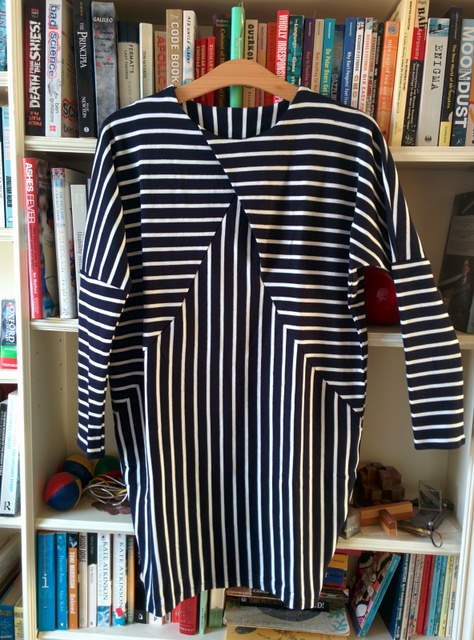 Last time I wrote I was all set to go to Karen's Made-up Meet Up.  I seem to remember it was warm enough for me to not wear the cowl I had knitted for my made-up pledge.  I had a lovely afternoon meeting new people and catching up with others that I had met before.


I came away with a  couple of patterns and a length of chambray, which I plan to make into a tunic for Youngest. 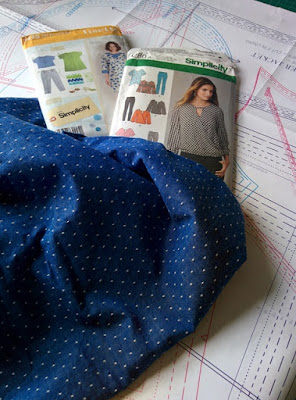 I also came away all fired up and raring to get sewing again. I have been sewing alot, but not blogging anything, so may have a few more catching up posts!

I got the latest 'Great British Sewing Bee: Fashion with Fabric' book for my birthday in June and had just contented myself with flicking through and planning what I might make.  The garment that really appealed was the drapey dress - I really liked the version in the book, but also Karen has made a couple seen here, here and here  and also this one from Alex.  I had bought a stripey knit earlier in the year which I thought would be ideal.

I think I traced off a size small, and I cut everything out in one layer. I think I cut one piece out the wrong way, but after much deliberation and consultation on IG, I decided that the fabric didn't have a right/wrong side and just flipped it over.
I felt that some of the markings and seam lines didn't meet up super well, but that could easily be user error and dodgy tracing. Karen had suggest not trying to match up stripes due to the strange shapes of the pattern pieces, so I followed her advice and then ended up with stripes that matched pretty well!
When I tried it on to check the fit, I was suddenly very concerned that the stripe was a bit strident and that as a whole it was a bit overwhelming.  I took the sides in a little, finished it off  and left it hanging on the shelves on our landing (one of my photo spots) for sometime. I finally got round to taking some pictures and still wasn't sure about it and I am not sure Husband was super keen initially. However I wore it for a drinks party the other day and really liked it and Husband said it looked much better than he thought it would.  I think that things look completely different when being worn 'for real' rather than specifically for photos. 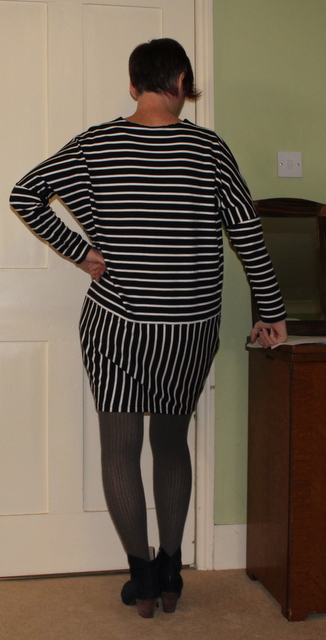 The lighting is appalling, so apologies for the dodgy photos.

Other news - I finished my radiotherapy at the end of September. I have had issues with my skin due to the effects of the radiotherapy, but I think after a couple of trips to the doctor and 'time' they are resolving.  I had my consultant follow up appointment about 10 days ago and I have now been discharged from hospital care due to my 'excellent prognosis'. Hurrah!  I am now in 'patient-led care' ie I go them if them if I have a problem/need anything rather than the hospital calling me back every few months for appointments that I may not need. It is all rather a relief that it is all over, but hasn't really sunk in yet.  I am getting quite fatigued quite easily, which is frustrating, but I was told to expect this for sometime as an effect of the radiotherapy. I was due to have this follow-up appointment shortly after Christmas, so it is almost like an early present to have this news now! 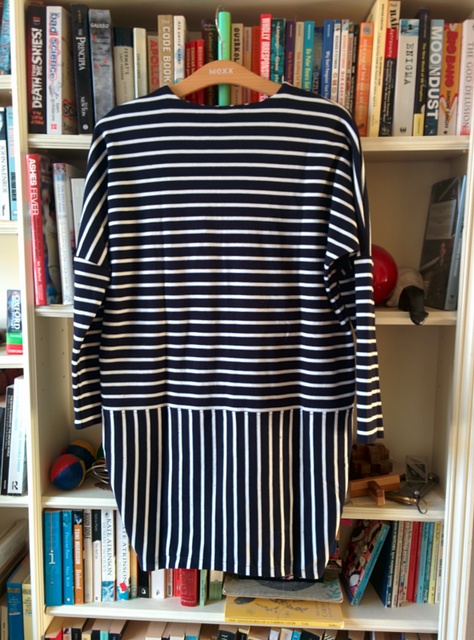