It is that time of year again where we sewists celebrate our makes throughout the month of May. Me-Made-May was started Zoe of Sozowhatdoyouknow fame, eight years ago!

This time I am actually signing up before May starts ( although only just!).  If you click on the #MMMay17 button in the side bar, that will take you to Zoe's 'sign up post' on her blog. Here is my pledge:


'I, Tamsin from Pimp my Curtains blog or Tamsinwp_pmc on Instagram, sign up as a participant of Me-Made-May '17. I will endeavour to wear at least one me-made item of clothing each day for the duration of May 2017. I am going to remove rtw clothing from my wardrobe excluding underwear, socks and sweaters.  I also want to sew as much as possible from my 'stash', which shouldn't be too hard as most recent purchases have had a loose plan'

Nothing ground breaking. I removed rtw from my wardrobe for my pledge last year, which seemed to work quite well. I shall enjoy the challenge of not reaching for jeans everyday (unless I make some new ones - which are on my list!)

Some time ago, when visiting friends, I realised that the ancient rtw pyjamas I was wearing were actually not really worth wearing. Fortunately I realised this before exposing myself in an embarrassing way, but resolved to make myself some new pj's when I got home.

I knew which fabrics I wanted to use, The plain slightly crinkley purple jersey I got from the first ever sewing meet up I went to back in 2012 and the stripey patterned fabric I got at a fabric swap meet-up in London last summer.  I had offered Eldest and Youngest pjs using these but neither seemed that bothered so I thought I would use it myself.

I used the true Bias Hudson Pants pattern for the trousers. I have made this several times already and didn't have any problems putting them together. The top was a pattern taken from a rtw top from H&M, which I have used a couple of times before. Fitting it on the fabric was a bit tricky as I didn't have a huge amount and I wanted the stripes to match as much as possible. I just about managed to to it as you can see here: 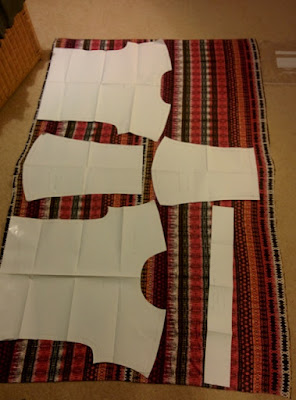 In order to fit the pieces, I felt I needed to slim down the sides of the top, but looking at this lay out it looks like that was unnecessary. I also used the stripey fabric as a contrast on the trousers. 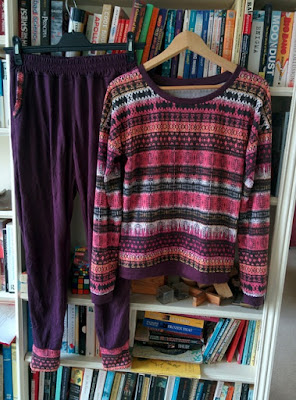 After I had finished, I gave the pj set a final press and some how managed to slightly melt the waist band of the trousers, pretty much at centre front: 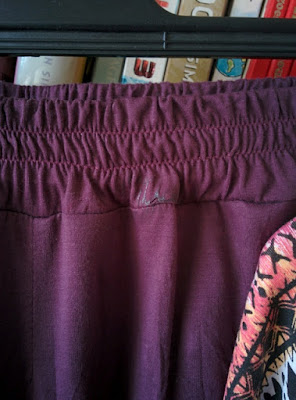 The melted waist band isn't noticeable when I wear them, but I'm guessing the fabric isn't the 100% cotton that I thought it was! 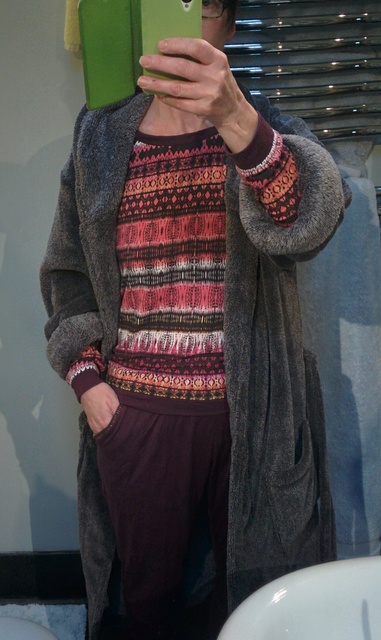 I wasn't sure about them straight after I had finished them, but now I really like them!