Continuing on with the recap of my makes for 2017:

I had seen a lot of versions of the True Bias Odgen Cami on the internet last summer and rather randomly I decided to make one for myself.  The fabric was leftover from a dress I made to wear to a wedding in 2016.  There was just enough to squeeze out this top. I quite like and wore it quite a bit, but I felt very exposed. If I were to make it again I might try to make the straps a little wider to give me a bit more coverage. True Bias's instructions are very good and it was a pretty simple sew. In order to fit the top in the fabric that I had, I had to cut the back in two pieces, which makes it easy to tell the back from the front! 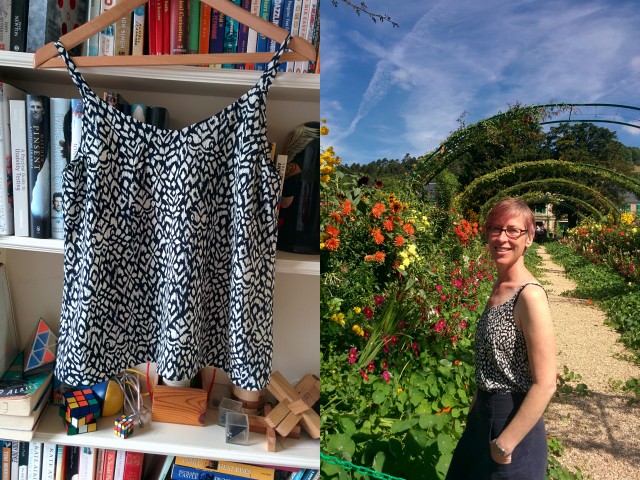 Both of my older girls decided to redecorate their bedrooms last summer which involved replacing their curtains.  The previous curtains had been made in a rather sweet, but childish print from the Designers Guild, by my mother-in-law about 15 years ago. They were showing their age and the girls wanted something that would go with their 'new' rooms.  Middlest's bedroom is a warm white with a feature wall papered in a blush colour with a rose gold crackle effect over the top.  A lot of accessories are rose gold and the new curtains are a blush pink that match the wallpaper pretty well.  Eldest's room is light and dark grey with a feature wall of a petrol/teal colour, with accents of yellow The curtain fabric is Sanderson 'Finches' in yellow which has all of the colours of her room in it.  We had looked at this locally and it was very expensive - I looked online and found just over three metres for less than the price of two in the shop.  Because of the shape of the window, the curtain rails pivot in order to let in as much light as possible meaning that the curtain's needed to be double sided. The previous curtains had been lined with blackout lining and both girls said that they would still like this. I put off doing this for ages, but once I got going they were extremely simple even with the blackout lining! 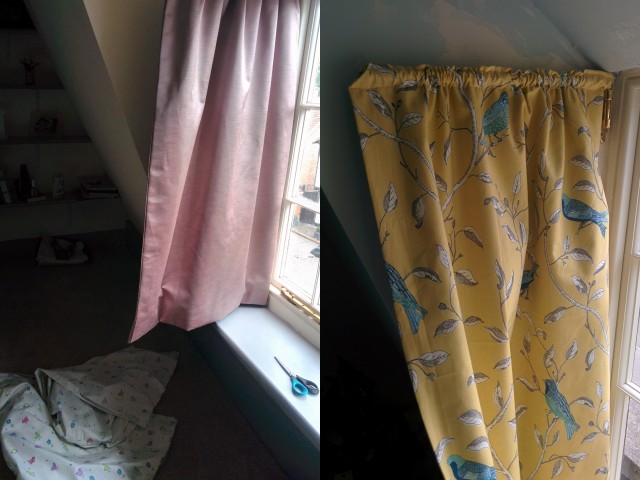 I have made the Closet Case Files Ginger Jeans and have plans to make more, but I wanted to try the looser fit of the Morgan jeans. I thought that I had the perfect denim, but it was far too stretchy, then I found some olivey green corduroy in my stash that I had originally bought to make a Colette Beignet skirt.  I have had the fabric for sometime and you can see in the collage the sun damage - thankfully on the reverse - from storing it near a window! I used the pattern instructions and the Jeans e-booklet when putting them together.  They are a much looser fit than I am used to - which is to be expected as that is the style, but I am not sure how they look on me. I have decide that I much prefer the higher waistline of the Ginger jeans - these feel a bit low, particularly in the back and I feel a bit frumpy in them. They are a useful addition to my wardrobe so I will continue to wear them for a while - and they are not blue - as many of my garments seem to be!

As an aside, having worn these quite a lot recently - they have bagged out with wear and are constantly falling down. They also seem to have shrunk in the leg length so I am not sure how much longer they will last in my wardrobe. 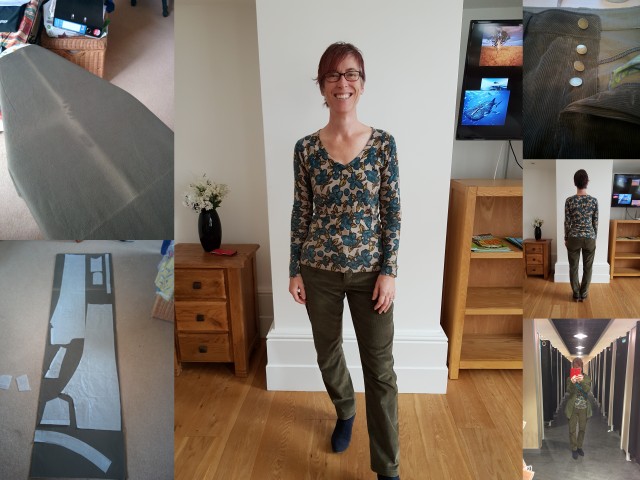 Having made Eldest a second pinafore dress out of some lovely ochre/mustard denim earlier in the year, I was left with a sizable leftover.  I had seen the Sew Over It Erin skirt when Lisa Comfort released it as part of her City Break Capsule Wardrobe E-book, then it was released as a pull out pattern with a sewing magazine (possibly Simply Sewing). I had in mind that I would make the long version, but I did not have enough of the leftover fabric, but there was plenty for the short version.  It was a pretty straight forward make - although I found that the centre back notches on the waistband did not line up.  Because I have been sewing for a long time I realised that this was an error and ignored it, but I felt that a less experienced sewist may not have realised and continued to try to match them resulting in a twisted waistband. I really like the finished garment and colour wise it is quite a departure for me! 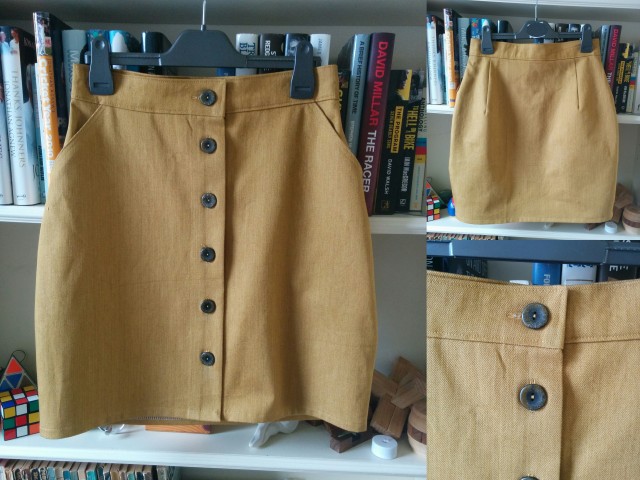 A lot of my friends in the village where I live know that I sew. One day I got a call from one of them asking if I could make a pair of pj's for the favourite toy of her youngest son. Apparently DeeDoo goes everywhere with him and despite being washed, was looking somewhat the worse for wear! I invited DeeDoo for a measuring and showed them the fabric I thought might be suitable. I drew up a little pattern and made a very tiny pair of pj's.  My friends son was very pleased with them and even wrote me a very sweet little thank you letter - he is 6! 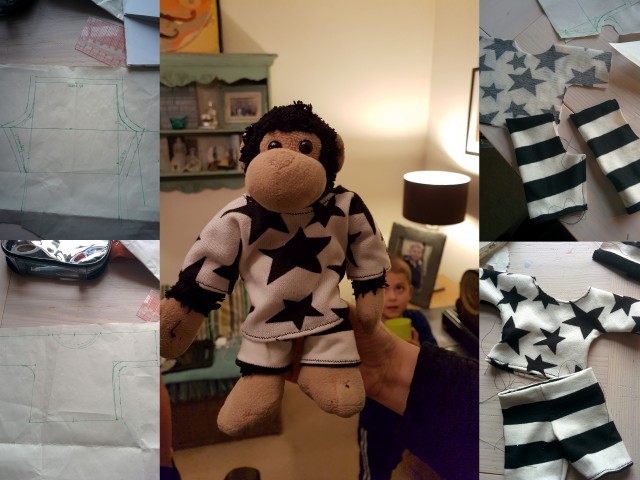 In October I went to Camp Workroom Social and took part in the Pant Fitting Intensive class that was taught by Melissa Watson using the Palmer Pletch tissue fitting technique. That experience merits its own post - I can't quite believe I haven't done yet! The whole trip was amazing and I ended up with a 95% finished pair of trousers by the end of the weekend. I finished the trousers a couple of weekends after I got back and the trouser fitted me completely differently from how they had in class - I know my shape fluctuates during the month but I hadn't expected such a difference.  I tweaked them to fit and they are now finished, but I haven't worn them and I haven't any photos of then as yet.  However I liked the idea of that style of trousers and proceeded to make a second pair affectionately called my  Party trousers. I used a stretch cotton sateen that I bought in Metro Textiles in New York and after discussing making a dress I decided pretty quickly that it would be trousers. I used the techniques we were taught in class and end up with a fab pair of trousers that got a lot of wear over Christmas and New Year. I also made the top to go with the trousers. It is one of my favourite top patterns - MyImage Cowl Neck top made in a navy slinky, possibly viscose, jersey. This time I decided to crop the pattern and put on a band at the bottom with a tie at one side. I also opted for three quarter length sleeves- again finished with a small band. A normal hem on this fabric was pretty tricky so I gave up! 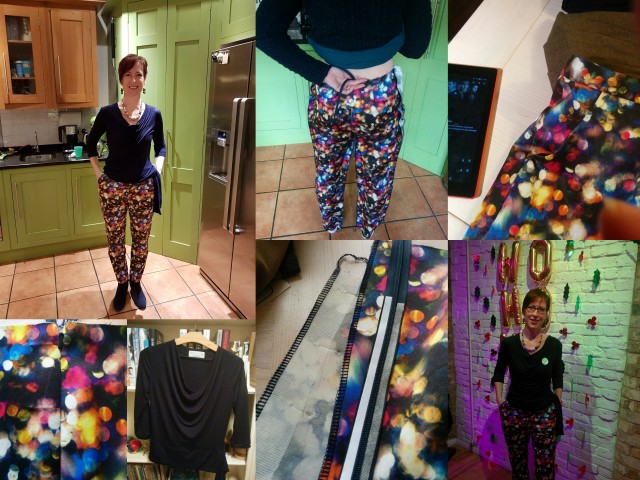 You may know that I have made my Husband a number of shirts over the years as a Christmas present.  At 6'3" he has always been, what he would describe as a 'big unit'. He has always been fit  and exercised a lot but decided that 2017 was the year to loose weight.  He has lost around 22kg and because of this he has slimmed out of the shirt pattern that I usually use for him (McCalls 6044) . Rather than buy the same shirt in the smaller size range I thought I would try a different pattern.  I have been following the progress of the Thread Theory patterns over the years, and thought I would try out their Fairfield shirt.  It has a different technique for the button band and also tower plackets on the sleeves.  Because alot of Husbands height is in his back I used to lengthen the McCalls pattern by about 5cm and I think I lengthened the sleeves a fraction.  For this shirt I also lengthened it by 5 cm. I didn't lengthen the sleeves as they seemed a bit longer any way.  The fabric came from one of the shops at the base of the Sacre Coeur in Paris, where they sell predominately pre-cut lengths of 3 metres. I cut the back yoke and the pocket on the bias for a bit of visual interest. I cut the inner yoke on the straight grain for stability and in a fine white cotton that I had in my stash, so that the pattern didn't show through on the the main fabric. The tower placket instructions were fab and having a gridded fabric also helped tremendously! I, and Husband, are both really pleased with it and it has already seen quite a bit of wear. However after a few wears Husband asked that I lengthen the sleeves next time I make it - probably only by about 2.5cm though. 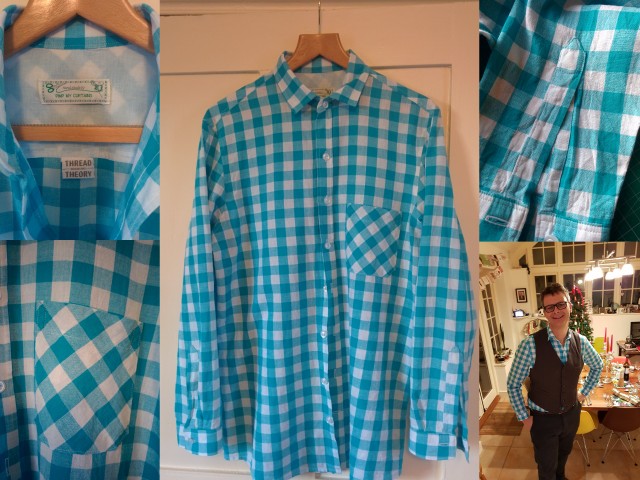 After the success of the previous waistcoat that I made Husband, I decided to go the whole hog and make another one for Christmas.  I wasn't super impressed with the Burda pattern I used previously so tried the Thread Theory Belvedere Waistcoat. I bought the fabric from Doughty and Sons stand at the Great British Sewing Bee Live and it was lovely to work with. I was very pleased with the pattern, the instructions were great and I have some very neat welt pockets. I made the more complex view with all the pockets and the little side vents. However, there is a BUT!!!  Knowing that Husbands height is in his back, I completely didn't think to lengthen the pattern at all (this was just after making the shirt above, where I did lengthen it!) and you may notice that it is too short on him. The fit is great - it just needs to be about 5cm(!) longer. I did feel pretty stupid for not doing that. I contacted Doughty and Sons and sent them a swatch recently to see if they by any chance had any more but they didn't. They did find something similar in a slightly different colour which I have since bought, but I haven't done anything with it yet. 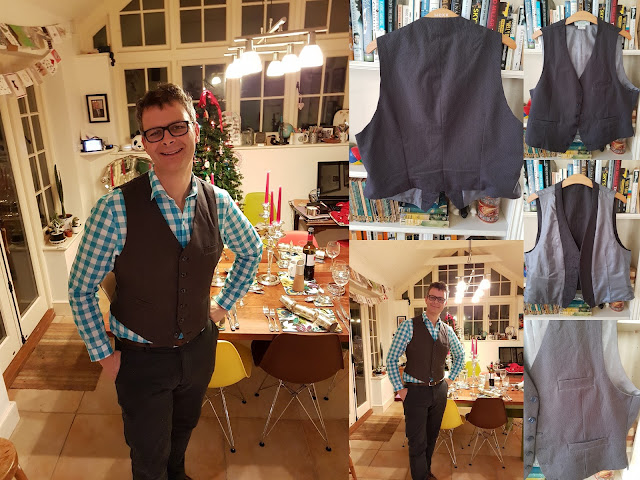 So that, finally, is the summary of last years makes.

After some procrastination I have cut out and am about half way through a new pair of ginger jeans, and I have been asked to do a bit of wedding sewing for later in the year!
Posted by Tamsin at 16:53 No comments: