Having completed my first Sorbetto ( the free downloadable pattern from Colette Patterns), I rushed headlong long into making another, with a view to reducing my fabric stash. There are so many things wrong with this top, but I think it is wearable... 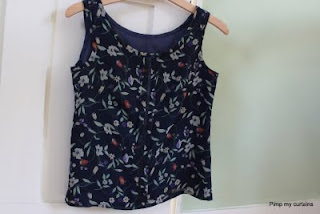 I had a small piece of material left from making a dress about 13 years ago.

A bit of history: the dress was made for a friends wedding. I used New Look 6828 view C for a bias cut dress as it looked fairly straight forward. I then chose some very sheer fabric - I'm not sure what it is, and then had to line it (with bremsilk, a scrap of which I also found in my stash). I had never used such tricky material, never sewn anything on the bias and never lined a dress. As is traditional for this kind of endeavour, I was busy hemming the skirt and the lining in the car on the way to the wedding. 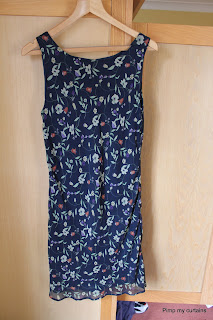 Anyway, I found the dress material scraps and juggled around the pattern pieces until I could get something out of them. I had to make a seam in the centre front and back order for this to work. Unfortunately, I juggled the material soooooo much that I lost track of my grain lines and found, when I came to sew the 2 back pieces together, that one of the pieces was on the bias. However, I soldiered on, attempting French seams ( which I haven't done since I made my sample seams for Home Ec GCE many moons ago). Middlest saw what I was doing and commented that she hoped I would wear something underneath otherwise people would be able to see my bra. 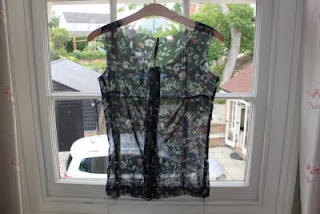 I had already looked out the lining material, so this comment spurred me on to make the lining. Again I had to juggle the pieces and this time had to sew bits of the material together to make a piece big enough to cut the back out - but I cut it all on grain this time! I self-bound the neck and the armholes again. I had to put a horizontal dart in the lining to prevent it hanging down below the top when I tried it on, and I sewed ribbon down the pleat to hide the seam there.

I think it works: 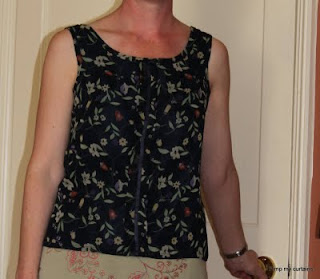 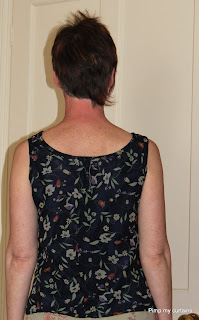 Whilst fiddling around with this for some time last week, I took delivery of a dress pattern - Simplicity 2591 and some material. I have been looking for this pattern for sometime, especially since seeing Karen's on Did you make that? She has made three great versions of this dress. Unfortunately, this pattern is now out of print in the UK, so it took some finding - so thank you to Emily from Big Beautiful Barbara Brown for sending out my dress kit!

Next up, proof that I am completely bonkers!
Posted by Tamsin at 15:01 No comments:

Along with the rest of the sewing world (or so it seems), I have made a top using the free download pattern Sorbetto from Colette Patterns. There are lots of lovely versions out there, so I thought I would follow suit: 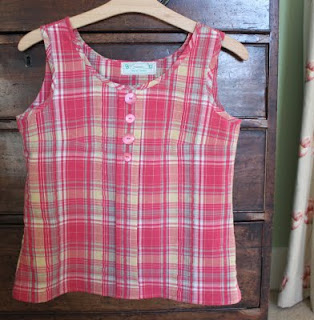 Strangely, I quite enjoy the piecing together of the pattern before I even get to cut into my material, but I did have a problem that several other people had, in that my test square only measured 3.75cmx3.75cm. Not having the knowledge or patience to try and work this out I just decided to cut a bigger size, which seems to have worked.

Having looked at the pattern pieces, I felt that the top would probably be quite short and had resolved to cut it as long as I could, fabric permitting. Thankfully I am not the only person who didn't want a 'crop' top, as Karen very helpfully pointed out the length issue in her post about her top.

I used the scraps left from making and cutting out the girls tunic shirts to make my top. (I juggled the layout for the second tunic shirt so that I could be sure of having a reasonably sized piece left over.) None of the bias binding I had at home was suitable, nor could I find anything that would work in my local sewing shop, so I ended up making my owning bias binding out of the very last of the scraps. After initial troubles with this caused by cutting my strips too narrow, I am very pleased with the result.

I used some buttons left over from the girls tops (or stolen from the second top as it is not yet made - shhhhhh!) to embellish the pleat, which again I am very pleased with. To finish it off I used on the new labels Husband got for my birthday: 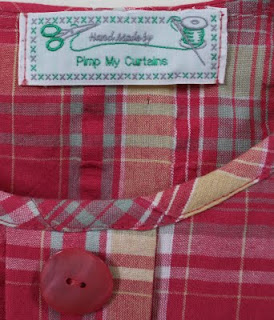 I have worn it several times since finishing it last week, but have yet to take a photo of me in it.

I was so pleased with it that I immediately set to on cutting out a second Sorbetto - which is a whole new story ....
Posted by Tamsin at 14:32 1 comment:

It was my birthday a week or so ago, and I had a very sewing themed set of gifts: 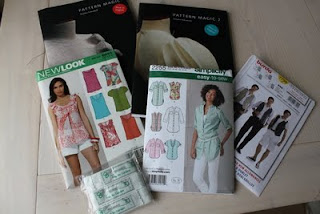 I have been eyeing up the Pattern Magic books for a while, and whilst my skills are no where near good enough to attempt anything from either of them, I love the concepts. I have been looking at patterns for ages, but was determined not to get any until after my birthday, just in case I got some as gifts.

Husband was particularly pleased with these (as was I!): 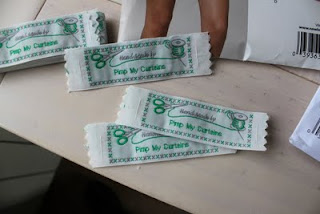 and he also slaved over this themed cake:

He was convinced that it was going to be a disaster, but I was really impressed!

Middlest was very pleased with her sewing kit for her birthday - phew.

Since finishing the tunic shirt for Middlest, I have cut out another in a bigger size for Eldest, cut out gingham muslin for a shirt for Husband, and made myself a Sorbetto top from the scraps of the girls shirt material. I have not managed a decent photo of my Sorbetto due to poor light and photography skills, so will post about that another day.
Posted by Tamsin at 13:06 1 comment:

It is Middlest daughter's birthday next week. She has been very interested in my sewing, and has recently completed her own bag using a very basic pattern and my sewing machine between projects.

I thought I would make her a little sewing kit for her birthday. I think I am right in saying that when Husband left home for the bright lights of university some years ago, his Mum sent him off with a sewing kit: 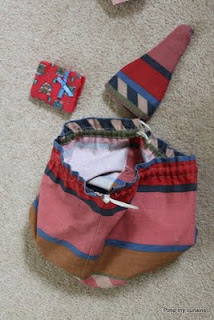 so in homage to that, if not a blatant copy, I decided to do the same for Middlest.

I made a sewing bag comprising two rectangles joined together with a channel for cord, sewn at one end and the other end sewn to a circular base. I also made a scissor case, pin cushion and needle-case: 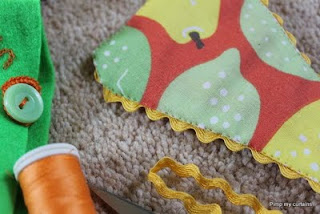 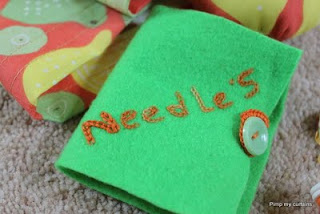 I finished sewing the scissor case and started putting together the needle-case, while waiting for all three girls to have their gym class the other day, and got several comments from other Mums that were waiting. They were very intrigued to know what I was up to and I have to say I think a couple of them were a bit confused as to why I was putting so much effort into something like that, instead of buying it. I want to encourage Middlest's interest in the same way that my Mum did for me and my Mother-in-law did for Husband. 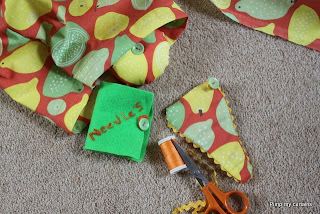 Just need to remember to buy some cord to finish off the bag. I hope she likes them!
Posted by Tamsin at 20:23 1 comment:

Having seen me at the sewing machine a lot recently, Eldest was keen for me to make her something, again. I gave her a range of patterns to choose from, one of which was this one. I also took her to the fabric department in our local John Lewis, just to get an idea of the type of fabrics she likes. Nearly everything she chose was jersey and unsuitable for the pattern she had chosen, so we had a look at wovens and she chose a pinkish madras check.

Hoping that I would be able to get something similar at the Fabric Fandango, I held off buying the fabric straight away. Unfortunately, I could not find anything suitable, so ordered it from John Lewis. I bought plenty (4 metres) in case Middlest wanted something as well. I checked Eldest's measurements against the chart on the back and decided to make an age 12 (she is not quite eleven).

The whole shirt went together well, the main difficulty being trying to shrink out the ease in the sleeve head. I thought that the front placket might be tricky, but that seemed ok. 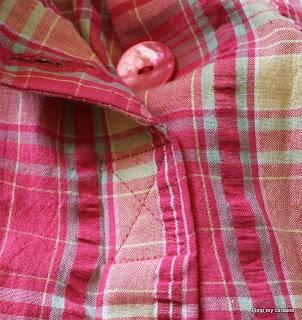 Also, having done a few practice buttonholes, I happily went ahead with my first one using the buttonhole attachment, unfortunately I thought that the stitching on the reverse leg looked terrible and that I was going to unpick and start again..... half an hour later.... I tried again, without the buttonhole attachment and did a much better job! (I was too frustrated to take any pictures)

When we tried it on her we realised that

a) she needed help putting it on,
b) she needed more help getting it off and
c) when it went on it looked almost too small

none of these things were good. She was quite worried about breaking the seams trying to get it on and off over her head. However, as mentioned earlier I bought plenty of fabric so, I could make another one and also Middlest was to hand to try it on. It looks a little big on her as a shirt (she tried tucking it in to the top of her jeans, but looked like she had a rubber ring in her clothes), but perfect as a tunic dress. 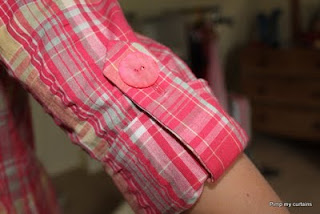