Eldest daughter was adamant that she did not want to wear a dress to her 6th form prom this year, and bought herself a floral suit from H&M.  We had some discussion at the time about the kind of top she would like to wear with it, with out really coming to a conclusion.

A month or so later I went to the Balenciaga exhibition with a crowd of sewists. After the exhibition we had a lovely lunch and then a small group of us went to Goldhawk Road. I was pretty tired and not really finding anything that I liked but in A One Fabrics I found what I thought would be the perfect fabric for a prom top.  It was super cheap - I think £2 a metre so I bought 2 metres thinking it didn't really matter if Eldest didn't like it at that price! 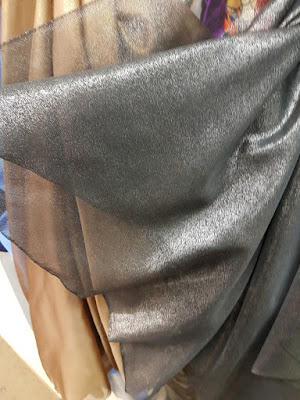 I washed it and added it to my stash, then we kind of forgot about it.  Suddenly it got to the end of April and we realised on the Monday that her prom was on the Friday of that week - we had a little bit of a panic then realised that it was completely doable in the time frame.  Eldest went through all my patterns for tops and came across New Look 6471 which had come free with a sewing magazine. 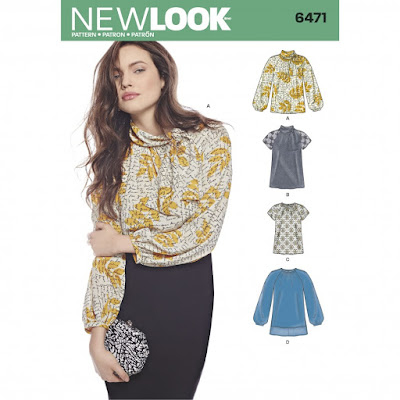 She didn't want the cuffs or a tie neck on the pattern, both of which were easy to change.  She had a rtw top that she had seen as a reference point, and it had shirring in places which she wanted.

I finished the raw edge of the sleeves, then did the shirring at the cuff. I think there are 5 or 6 rows. It was pretty straight forward to do - I put elastic thread in my bobbin and normal thread in the needle - as you sew the fabric ruches up.  I was pretty sure I had some black shirring elastic but couldn't find it and had to make do with white.  Of course as soon as I had completed the whole top I found the black elastic! 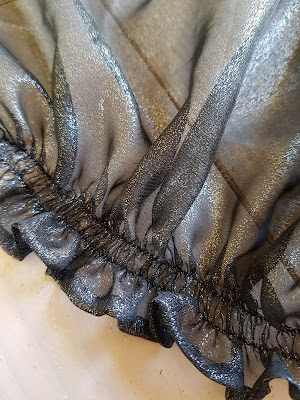 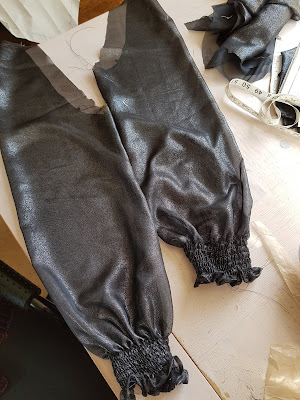 My machine didn't like the fabric very much so I used tissue paper between the fabric and the feed dogs, which made it much easier to handle. You just tear it away when you have finished the seam.  I keep all the off cuts of tissue from commercial patterns for this purpose. 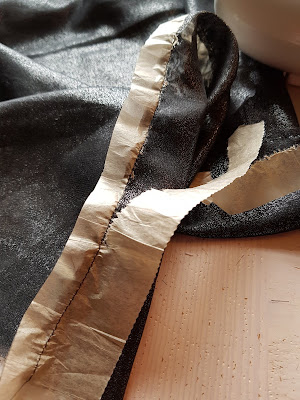 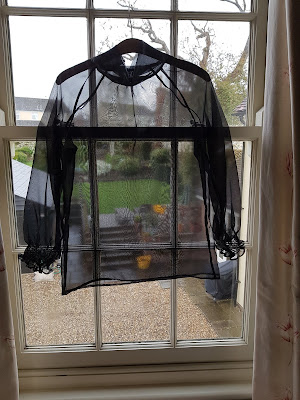 I did french seams throughout - the fabric was so sheer that any raw edges or overlocking would have been visible from the right side. Luckily the pattern was a raglan sleeve so I could french seam the sleeves easily too. 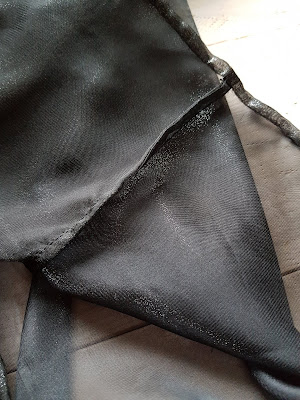 I initially put little buttons on the collar but they were too heavy so I swapped to a couple of lightweight plastic snaps instead. 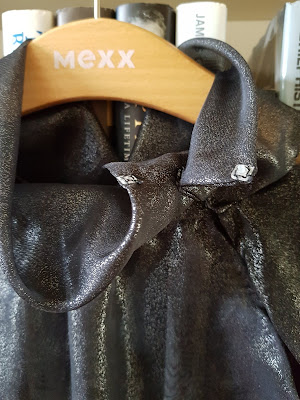 The top was finished with a day to spare, it met all requirements of eldest and she received lots of compliments at her prom - win! 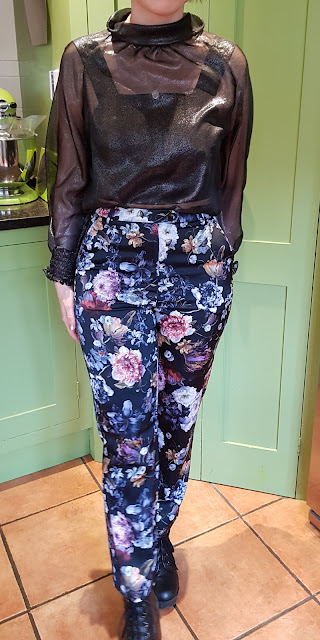 This time I bring you the Lapwing Culottes. This post went live on the Simple Sew Website a little while ago, but life seems to have got in the way of posting on here for a while. 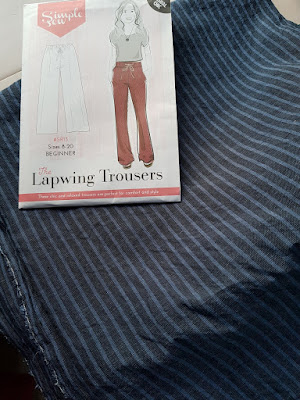 After some confusion mostly from me I think, I received my pattern and fabric for my culottes. The fabric is a lovely linen from Rainbow Fabrics.  I had thought that I might wear them as pyjama bottoms as I could do with a pair for summer, but the linen is a bit crisper than would be suitable for bed wear and will make a nice pair of trousers.

Again I managed to cut out quite economically and may have enough for a little top too. 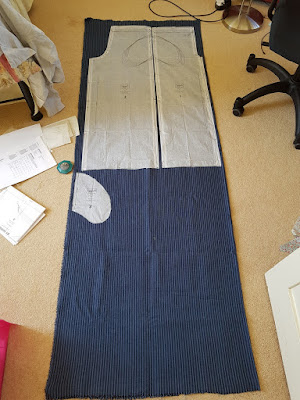 These trousers have lovely capacious in-seam pockets.  I have sewn in-seam pockets many times but I have to say the instructions for these were not as straightforward as they could have been. 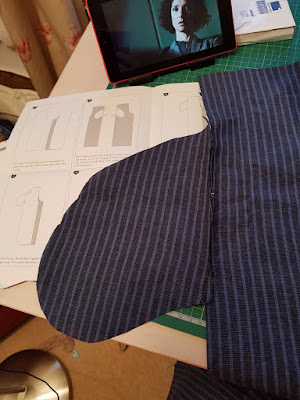 It took me a while to get my head round the instructions for some reason and I feel that they don’t sit quite as well as they could, but it is not annoying enough to do anything about.  In order for them to sit a bit better, ie keep the pocket facing towards the front of the trousers, and to add some strength at that point, I sewed a horizontal line above and below the pocket where they join the trouser leg. 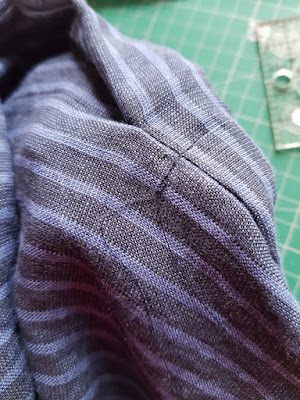 Because linen has quite a loose weave, I was a bit concerned that the stitches might pull on the back crotch seam. I used a tip I picked up at Camp Workroom Social last autumn and used stretch stay tape along that seam. I placed it along the seam stitching line and sewed as normal. 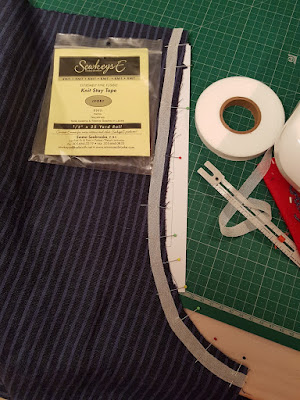 I had decided to use elastic in the waist instead of a drawstring as the pattern shows. When I tried on the trousers, I decided that the crotch length was going to be a bit short for my liking if I followed the instructions. I decided to add a facing to create a channel for the elastic and to keep a bit of the crotch length. 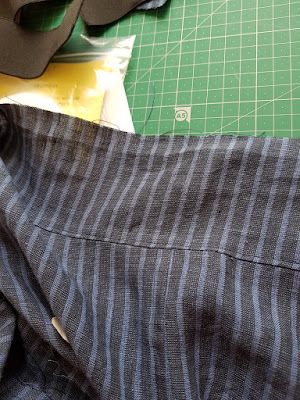 I trimmed the seam in side the channel very carefully with my new duck billed scissors - they were a recent birthday present and it was the first time I had used them properly. 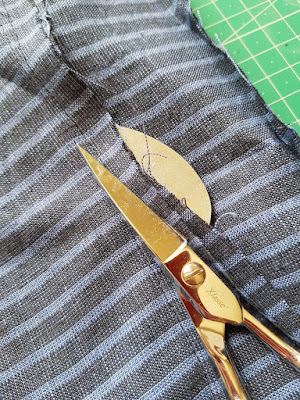 Once I had got the waistband and elastic sorted, I tried them on to assess the leg length. As cut, they were comically long! They would have looked amazing with very high heels, but as I seldom wear such heels, I knew I would need to lop quite a bit off. 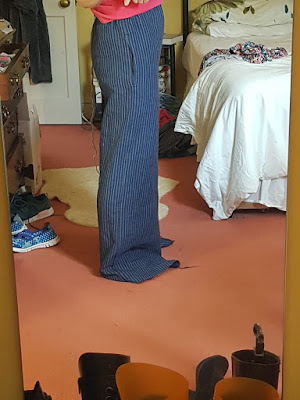 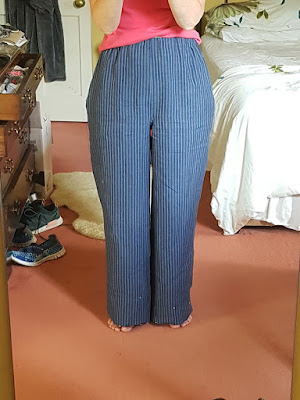 I initially pinned them to be a floor skimming full length, but inspired by all the cropped trousers I have seen on the internet and in my girls wardrobes I thought I would try the cropped length.

This is the finished length - having been very unsure about them whilst making them, I am now very pleased with them. They are lovely and cool in this extraordinarily hot weather we are currently having in the UK. 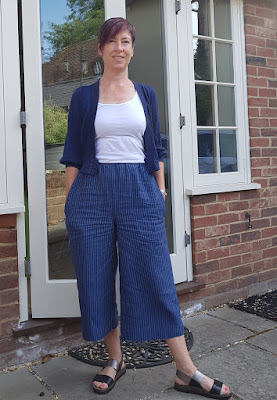 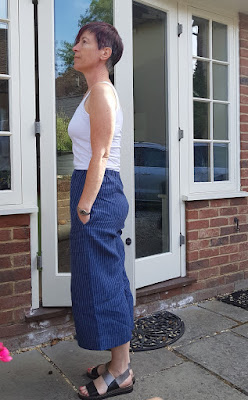 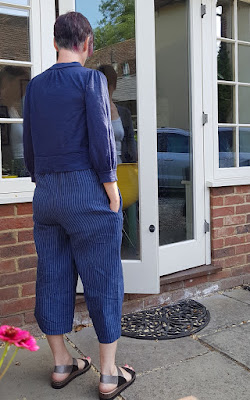