Well exciting times! I have been asked by Gabby of Gabberdashery if I would like to join the team of bloggers on the
Simple Sew Blogger team. Gabby asked me at the beginning of the year and this is my first post to go live. I am
one of several new faces to join the team and we are allowed to post our makes on our own blogs once the Simple
Sew post is out. I have been blogging sporadically here for a few (9!) years, and I thought that being part of the
Simple Sew team might spur me on to write a bit more frequently! 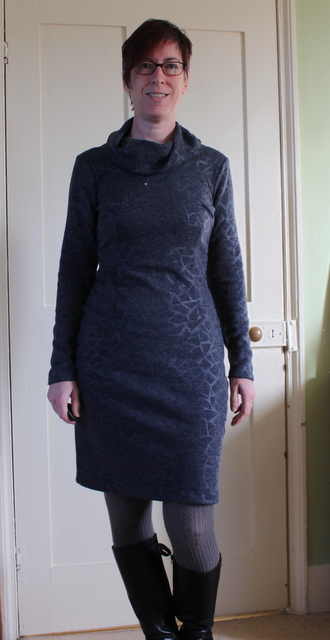 Gabby asked us to have a look at the patterns available on the Simple Sew website and choose some that we would like to sew.  I realised that I already had several of the patterns as they had come free with Love Sewing magazines over the last couple of years.

I am normally a jeans and cosy top kind of person as it fits my day to day life of being a stay-at-home mum. However, every now and then I feel a bit bored with the mum uniform and want to wear something different.  Recently that ‘something different’ has been jersey/knit dresses, so having looked through my pattern collection I thought that my first Simple Sew make would be the Bella Dress. 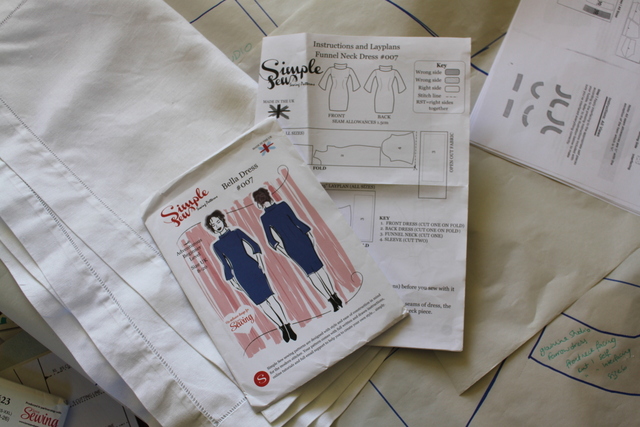 The fabric I chose is some kind of slightly embossed heavyish knit that I bought from M.Rosenberg/Stitch Fabrics at the Knitting and Stitching Show, Ally Pally in October 2016. 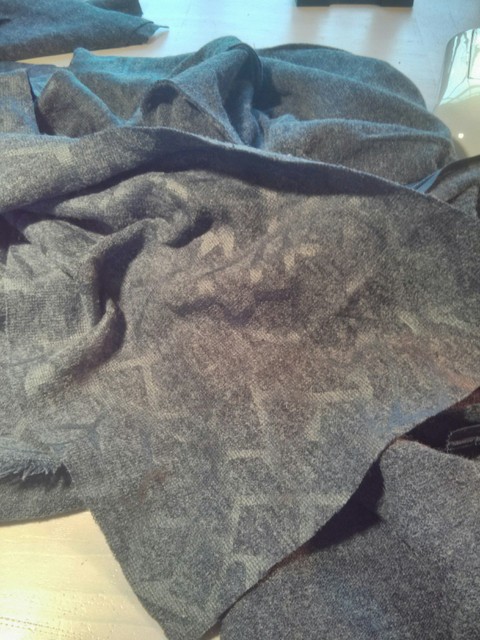 I had always envisioned this as a long sleeve top (to go with my jeans!) but thought that it would be a good choice for the Bella dress. I think I only bought a metre and a half, and surprisingly this was plenty for the dress due to the width of the fabric. I didn’t really use the lay plan but managed to get the dress cut out perfectly with minimal fuss.  I even managed to cut the collar piece about 5cm deeper for more slouchiness.

I have made many garments in jersey, but this was the first time that I have sewn darts in a knit fabric, and also the first time I have put a zip into a knit.  The instructions didn’t specify what type of stitch to use to sew the darts, so I did a couple of practice ones on some scraps using both a small zigzag stitch and a slightly longer than usual straight stitch. I tried the zigzag stitch to try to keep the stretch of the fabric but it didn’t really make much difference and it also made a slightly lumpier looking dart, so I used the straight stitch. 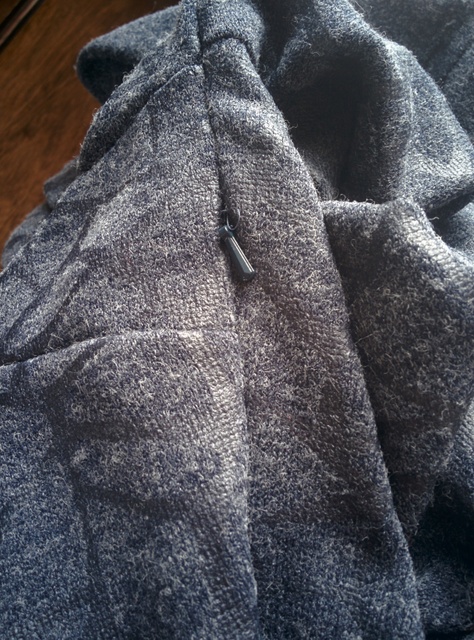 I made the dress up on my sewing machine using a zigzag stitch (apart from the darts). I normally finish the seams on a knit by overlocking the seam allowances together, but this made for quite a bulky seam in this fabric so I left some seams unfinished and and finished some singley with the overlocker.

Once I had cut out the dress, I did a quick hand baste together to check the fit.  I was slightly alarmed to find that it was rather more form fitting than I had thought, and thought it was a good job that there was a zip in it. However once I made it up properly I realised that the fit was ok and that actually I probably don’t need the zip - I managed to get the dress on this morning without undoing the zip! I may take the zip out just to get a slightly sleeker fit on that side seam, but I don’t notice the fit when I am wearing it so I may leave it.

All in all, I am very pleased with this dress as my first sew for Simple Sew! 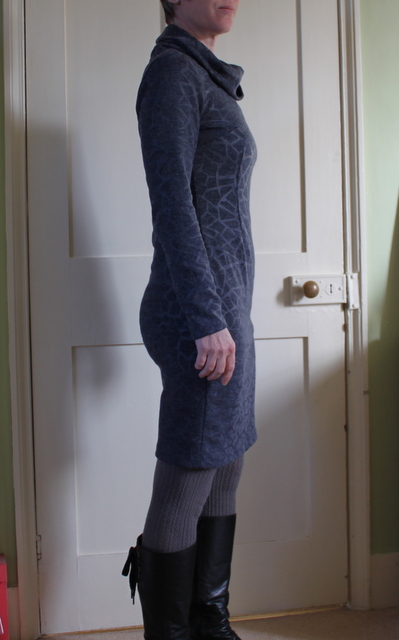 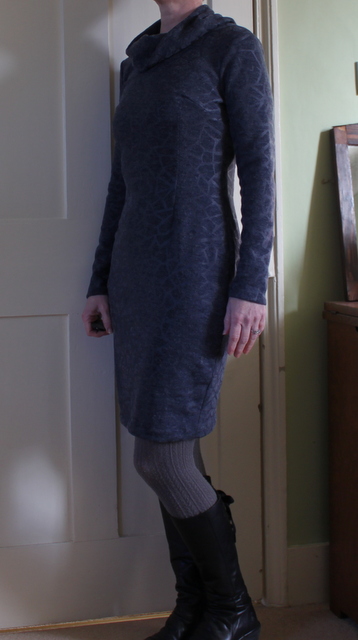 So this is my first blog post of the new(!) year and the second instalment of completed projects for 2017.  I mentioned at some point last year that I would like to blog more as I still really enjoy reading other peoples blogs. The blogging doesn't seem to have happened so much - but, as you will see I have done a lot of sewing and I felt I would rather sit and sew, rather than sit and write about sewing.

First up are some self drafted linen trousers.  I have been taking a patterncutting class for some time and was very excited to get to making trousers. I made one pair form my block that were ok, but still not great so last spring I decided to revisit my block and make some more, better fitting trousers.  I ended up making 4 muslin/toiles for these and whilst they are much better than the other ones, they are still not quite right - the waistband is far too high at the front so to make it comfortable I have on occasion folded the band over at the front.  I need to take it off and lower it by about 2cms 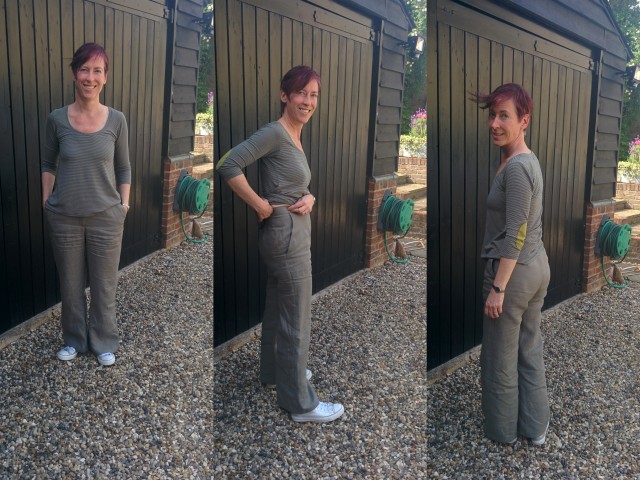 My Eldest bought some cheap trousers on the internet from some where like Boohoo (brown pair). When they arrived they looked nice, but she had the problem of them being too big on the waist even with an elastic waistband.  I managed to adjust them to fit better which involved adding a couple of darts in the back and shortening the elastic. The elastic was interesting as it was sewn into the trousers as if it were a facing.  Eldest decided that she really liked the style and asked me if I could copy it - which I managed to do (blue pair) and I used up some poly crepe from my stash. 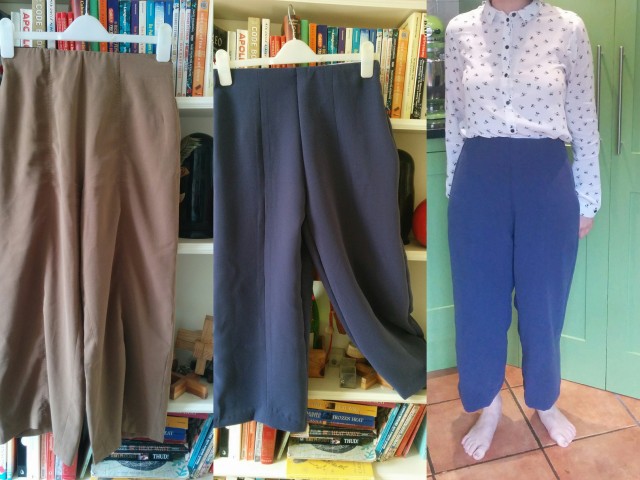 One of my girls bought a playsuit from somewhere like New Look a while ago and whilst it doesn't get a huge amount of wear, Eldest decided that she really liked the style of the top and could I copy that too please? I traced off the pattern as well as I could  and made a muslin from an old jersey skirt  to check the fit.  It was proclaimed perfect,  so I then cut into the fabric she had chosen. The fabric was one of abut 5 or 6 knit fabrics that I won as a raffle prize at the Dressmakers Ball in May! I tried the top on having thought that the fabric colours wouldn't suit me but I think I might make something for me out of it too! 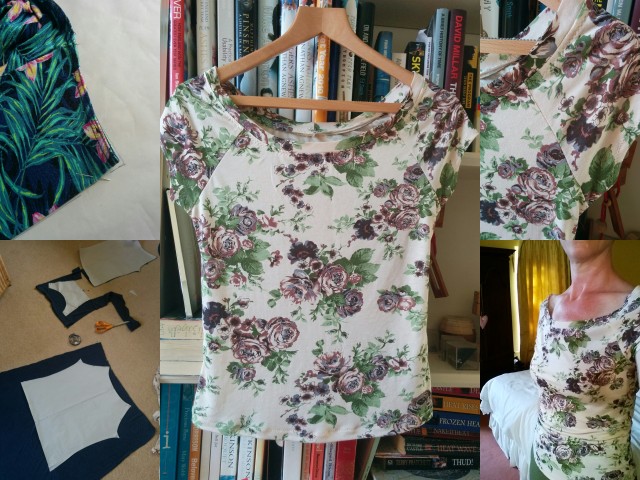 Around the same time as making the top above, I signed up to pattern test a skirt for Sinclair Patterns. It was the Amaya Asymmetrical Pencil Skirt.  I made it in a mystery textured knit that I picked up at a fabric swap a couple of years ago. I made it up exactly as the instructions said, then ended up shaving some width off at the hips, as my hip curve was not as defined as the pattern.  I believe that the final pattern had some of this width taken off, as other testers had done the same thing.  I wasn't sure that I liked it on me when I first finished it, but it actually got quite a lot of wear over the summer. 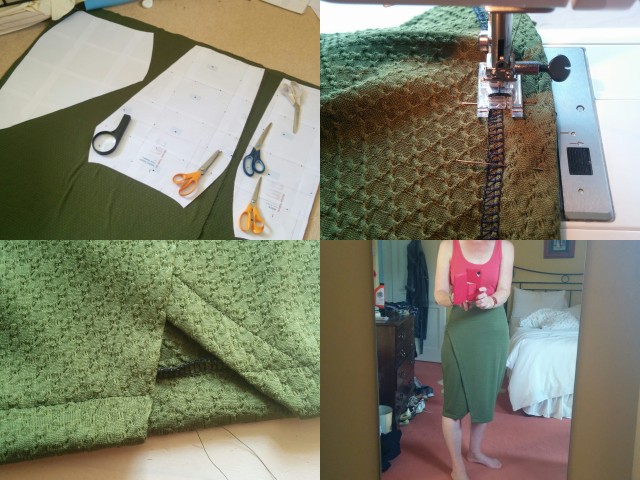 A while ago my Mum had been going through stuff at her house and had found a couple of patterns that I used when I was a teenager.  One of them was the dress pattern that I used for my textile GCSE in 1986.  It was Butterick 6603 which now qualifies as vintage. It still looks a nice dress, so I thought I would try it again - it actually reminds me of the True Bias Southport dress.  I made the flared skirt version for my GCSE so thought I would try the slimmer version this time.  I made the same size as before (!), managed to cut the front out wrong but saved it by adding a button placket, and covered my own buttons. It felt like a never ending project at the time but I think it worked out OK in the end. 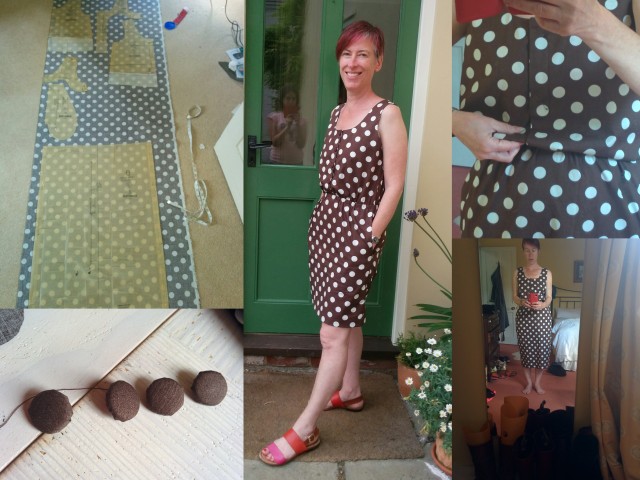 After a rather unsuccessful shopping trip early last summer I made a Pauline Alice Rosari skirt for my middle daughter. She had had the problem of trying skirts and trousers on, only to find if she could get them over her hips then they were massively too big on the waist.  Rather demoralised by this I offered to make her a skirt - the Rosari was almost identical to one she had grown out of  and I was - surprise surprise - able to make it fit her properly! The denim is a rather stiff, very black denim so at one point I was experimenting with distressing scraps with sand paper and bleach! None of my experiments met with approval though. 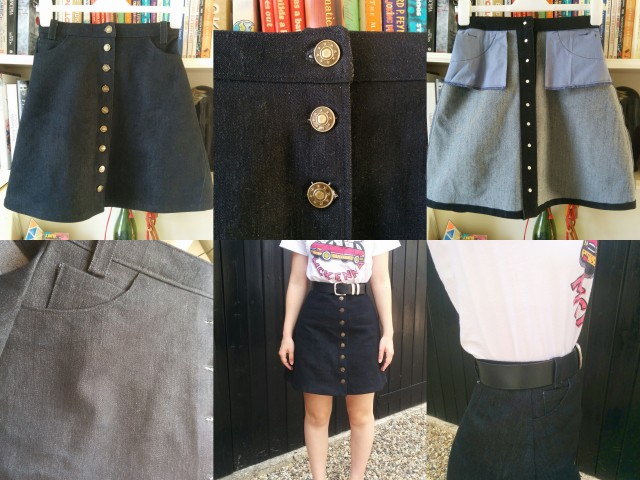 Over the last year or so interesting sleeves seem to have a moment in the spotlight.  I was pondering various patterns with flouncy sleeves and realised that a peasant shirt that I have made before, had the type of sleeve I had been thinking of trying (New Look 6179).  I shortened the main bit of the sleeve so that the flouncy bit finished at my wrist and I made metres and metres of bias binding for the neckline. I have tons of binding left over! A very successful light summer top that actually went rather well with the self drafted trousers (above) and the Amaya Asymmetric skirt (also above) 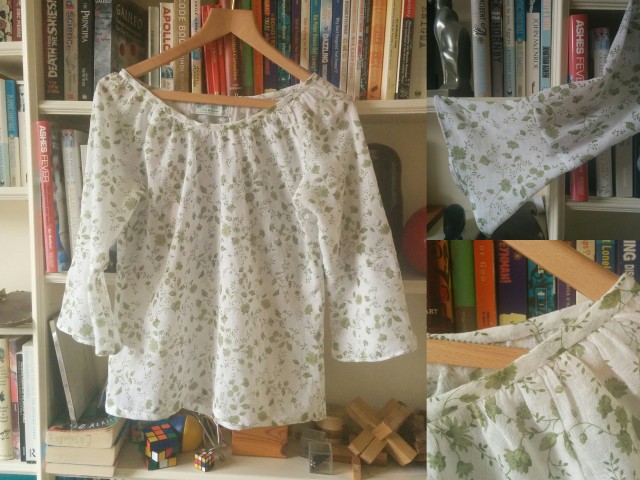 This next make is one of my rare fails.  The pattern, McCalls 7094 came free with one of the sewing magazine that are now available on the high street.  I liked the look of the shirt and had what I thought would be the perfect fabric.  However, the pattern came up massively too big for me.  I felt that the collar and placket instructions were particularly fiddly. I took some width out of the sides and stitched down the pleats at the shoulder, which both made the top better to wear.  I wore it a couple times but didn't really like it on. I packed it away with my summer stuff so when it warms up I will give it another chance, but I may see if my mum is interested in having it as she had admired the pattern envelope. 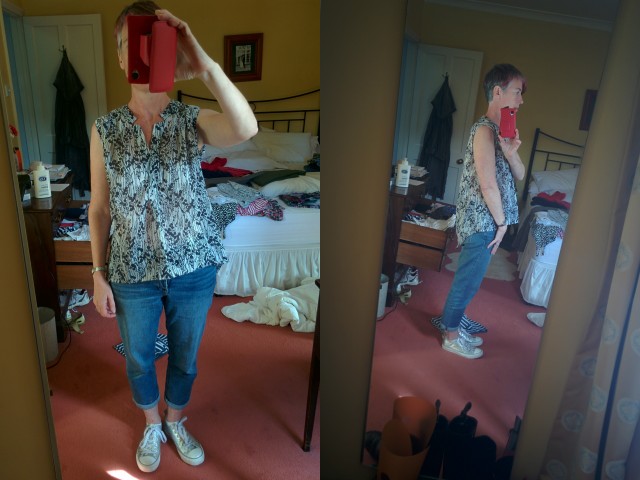 I am going to cut it short here as otherwise this will be super long. I have several more makes to share, so look out for part 3! Oh, and I also have an exciting post for tomorrow!
Posted by Tamsin at 12:53 3 comments: