Random crocheting continues.  I decided that I needed to move on from crap nets and (steadily improving) slippers.  I still have endless problems with counting rows, rounds increasing mysteriously by one stich and joins that look nearer to the San Andreas fault than a neat row of stitches.  Ah well.

So, I thought "Beanie for me", did my usual thorough research on crochet patterns and with my usual precision found myself making a, er, Marguerite Beret.  To be honest, I might have been influenced my Grandmother churning out slouchy hats for Daughters and the lovely looking triangular stitches.  Anyway, tongue clamped firmly between my teeth I was soon twisting and turning the hook trying to work out "what the hell was a Marguerite stitch anyway?".

I slavishly followed the pattern with the usual disregard for common sense (I never have any idea what these things are going to look like).  I had to return to the shop for wool (there is about £15 of wool in this hat!) since I had initially bought the wool for some slippers for Wife and not to make a giant hat.

All seemed to go swimmingly, although it did seem to be a little elongated.  I couldn't tell if this was by design or incompetence.  I had the usual issues with joining and counting.

The hat should have looked like this (note how flat it is at the top, I did not realise this until comparing the hats):

For novelty value it scores highly, but I think when I can find the will I will be pulling it apart and trying again.  I think in the outdoor pictures Eldest is wearing it inside out, but there was certainly no sign of the beautiful triangles either way around, and it can make people look like a very silly bishop (see below).


I guess I will just keep trying when the whim takes me, but I am not convinced I will crack this. Eldest much prefers the hair down look, though you see people with hair up in the hat a far bit.  Maybe they have dreadlocks?

I found some earlier photos where it looks better, but still can't for the life of me work out why it has the crazy point?

Sew what have I been up to?

So, no posts for a while, but I have been sewing quite alot, in short bursts.

I started a dress making course in September. All the courses I was interested in, in Cambridge, were full with extremely long waiting lists, however I found one run at a village college near Cambridge so signed up for that. I appear to be the first new person to start for a while, and most of the ladies there all do the pattern drafting course that the runs for the previous 2 hours, so they get a good four hours sewing done. The dress I have chosen is Simplicity 2591, a favourite of Karen's from Didyoumakethat? She has made several lovely versions of this. I have chosen the gathered v-neck version - which doesn't look that great on the pattern cover, but will suit the fabric I am using. Finally, I have cut into another of my Fabric Fandango purchases, at last. This one is my favourite from that haul and I didn't want to get it wrong even though I bought 4.5mtrs, so have room for mistakes if necessary!

My instructor took all the relevant measurements which resulted in my cutting out a size 12 on top and a size 16(!) for the skirt. I have never worn that size anywhere, but my measurement were firmly in that size column. The fabric I am using has a loose weave, so I wanted to underline it. I followed Tasia's instruction's for this, but ended up hand basting some of the layers together, because what ever I did to the tension on my machine, the stitching was too tight and distorted the shape of the pieces slightly. 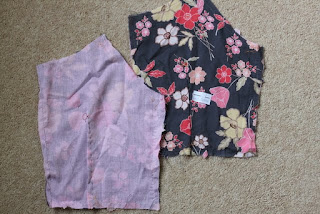 The next thing my intructor wanted to do was have to the whole dress hand basted together to get a feel for the fit. This was surprisingly soothing to do as I could do it in front of the TV, while Husband worked on the computer. The size 16 skirt required more gathering to fit the size 12 bodice, but it came together very nicely and gave me high hopes for the finished dress! The only fitting issue was that the back is too wide at the top of the zip, which my intructor wants sort out at the end of the construction process rather than putting the zip in halfway through as per the instructions. Having now almost finished the dress, we found the the front gaped at the sleeve seam, so some very careful unpicking had to be done in order to take it in a little.

So far I don't feel that I have learnt anything new - I am re-acquainting myself with some techniques that I learnt when I did 'O' level Home EC textiles. It is good to know that what I am, or have been doing is correct, though.

I have also been sewing some dolls. 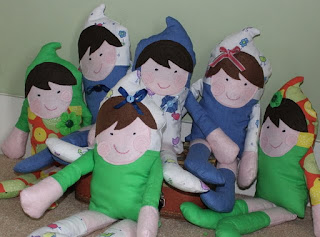 The whole process has been intensive. The girls Primary School had a Table Top sale soon and I rashly said I would have a table. I had a vague idea that I would make some dolls for this having seen the dolls that Jorth has made, and following the tutorial from the original maker. I used mostly material that I've had lying around for a while, but unfortunatley I didn't sell a single one. I wasn't the only one who didn't make their pitch fee though.

Middlest daughter has been after a new pencil case since the beginning of term. We had a look at the offerings in our local WHSmith, but she didn't really like any and I didn't want to spend upwards of £5.99 on something that she didn't like. Having gone through my collection of fabric, she settled on some cupcake material I found in a rememnant at And Sew On near Dunmow in Essex. I did a quick Google of pencil cases and found this which seem to fullfill requirements. This blogger also has a tutorial to make these rather sweet little things called Sarubobo plushes, so I made one out of the lining material. Middlest seems very taken with the pencil case and the plush. 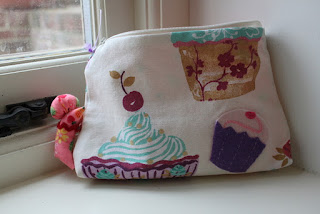 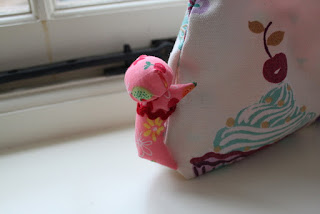 Half term found me in London for a few days. Unfortunatley, I was laid up in bed for the first day, but felt sufficiently recovered to go to Goldhawk Road the next day. This time I went with a shopping list, looking for specific things.

I am planning a denim Portfolio dress, a corduroy Beignet/trousers and some jersey for tops (not that I have used up the jersey that I bought at the Fabric Fandango yet). Having seen Karen's latest 'Star Wars' skirt, I think that I have bought the same corduroy she has just made her latest Beignet from - great minds think alike, or something like that !

Well, that's enough for now. I'm off to start the muslin for a shirt for husband (that has been cut out for a couple of months). I sat down last night and wrote a list of what I would like to sew. It was quiet long. Subject for a different post perhaps!
Posted by Tamsin at 20:21 3 comments: