So, after yesterdays post, I finished my Scarf!  Yesterday I needed to seam it together and weave in the ends, so I that's what I did earlier today whilst sitting in the sunshine. 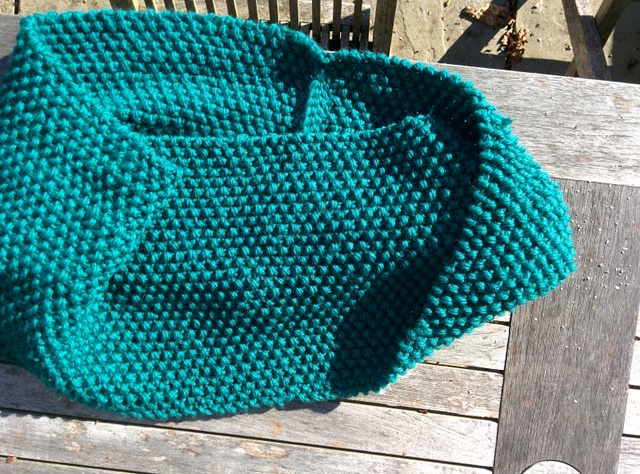 The scarf is very warm - I am wearing it right now as I have been sitting in our kitchen with the french doors open and it has got a bit draughty. It is going to be deliciously cosy come winter time!


Many thanks to Karen for hosting the Initiative and giving us all a little extra push to do stuff we may not have done otherwise! Even more kudos for having raised so much money for the National Literacy Trust.  Have you seen Karen's dress - its amazing! I am looking forward to seeing it in person on Saturday at the Made Up Meet Up. I am hoping that the weather will be nice enough for me not to need my cowl on Satuday!

I am unbelievably chuffed with this! I have never knitted anything before and now I have something that I can wear. What can I knit next???

Firstly of all I would like to say thank you for the kind messages I recieved after my last post.  I am feeling much more positive about things than when I last wrote. The results from the second operation came back as being all clear - in that all the tumour cells have been removed successfully.  I have now started radiotherapy, I am half way through my second week, and am finding it quite tiring and feeling a little uncomfortable. I have also started Tamoxifen, which I will be taking for the next five years, and comes with its own set of problems  - my problem seems to be a disturbed digestive system, but it takes a while for the body to get used to the drug, so I am hoping that will all settle down soon.

Anyway, back to the Made Up Initiative....

Back in August, Karen from DidyoumakeThat? teamed up with  Love Sewing magazine and launched the Made Up Initiative in support of the National Literacy Trust. Karen is a children's book editor and literacy is something close to her heart. I was lucky that I grew up devouring books and it rare that I don't have a book on the go. Fortunately Husband and I have managed to instill a love of reading in our girls (although it would be nice if two of them read something other than Harry Potter and associated fan fiction!) however many people in the UK don't have that opportunity and this is a small way to help. The idea was for crafty types to make a pledge to make something within a set time frame and at the same time make a donation to the Made Up Initiative. Initially Karen was aiming to raise £1,000 in a month, with the donations being done via a Justgiving page. At the time of writing the Initiative has raised £2500 - amazing!

Having spent a lot of time sitting around recuperating this summer, much of it spent reading, I rather randomly decided to teach myself to knit. At that point I didn't feel like sewing, but wanted to do something with all my sitting around time.  I was inspired by the Gaptastic Cowl that Amanda from Bimble and Pimble made a while back and figured that it shouldn't be that hard to do something similar. The Gaptastic Cowl is a free pattern on ravelry. So my Made Up Initiative pledge was to make the Gaptastic Cowl and finish it within the month.

I sat on the sofa armed with knitting needled that the girls had from trying to learning knitting when we were in NZ, a ball of wool left over from Husbands crocheting days and Youtube videos on how to cast on, how to knit, how to purl and to join wool. I think I did it ok... 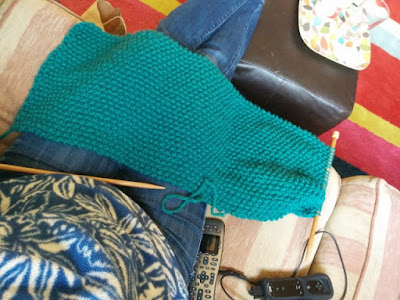 To start with I was pretty rubbish, I just kept knitting and purling to do stockinette, I tried a bit of ribbing, I pulled it all out if it wasn't going well or I ran out of wool, I practised the moss stitch, then I felt brave enough to try with 'proper' wool. I went to my local craft shop and bought 1 skein of  Erika Knight maxi wool in Mallard. They had plenty so I thought I would just see how I got on then buy any more later. I ended up buying two more skeins. I didn't read the cowl instructions properly and bought normal needles (9mm bamboo)  not circular ones so I kind of made it up in the end.  I cast on too many stitches twice and ripped it out twice... but that just means I've got pretty good at moss stitch at the moment!  Last night I armed myself with Youtube again to learn how to cast off, which I manged successfully and today I shall seam it together to get the cowl effect. Oh, and I need to weave in the ends where I joined the wool. 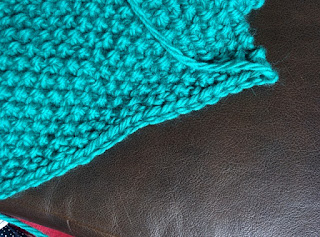 Youngest doesn't think I should seam it, but I'm pretty sure I can undo the seaming if I don't like it. I am currently trying to decide whether to stitch toghter in a straight forward way or to do it as a Mobius strip. The wool is 100% British wool and the moss stitch makes the scarf lovely and squishy. It will certainly keep me warm in the winter, juding by how warm I was with it on my lap!

For reference I used this video for casting on. This lady has several basic knitting videos that were all useful.

At about the same time I decided that I would join the modern world and sign up with Instagram. I am still getting to grips with it and only have 4 lovely photos (3 of my knitting!) on there so far. I have a little icon on the side bar if you would like to see what else I get up to - I can be found @tamsinwp_pmc.