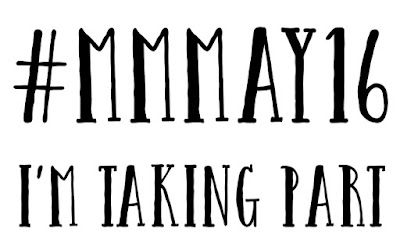 I have done this challenge for a few years now and have always enjoyed it. I have generally not made my pledge too tricky because I know I just wouldn't do it if it was!  Last year I signed up for 5 me-made days out of 7 for each week which I managed easily. Here is this years pledge:


'I, Tamsin of pimpmycurtains.blogspot.co.uk and tamsinwp_pmc on IG, sign up as a participant of Me-Made-May '16. I endeavour to wear an item of me made or refashioned clothing each day for the duration of May 2016. I am also planning to remove any rtw clothing from my wardrobe (other than underwear, socks and sweaters) just to see how I get on'
Nothing too crazy. I have left sweaters in my proviso for rtw clothing, because, from past experience May is generally pretty chilly and I would be cold and miserable if I couldn't wear my jumper/cardis!

Good luck everyone - I look froward to seeing other peoples MMMays!
Posted by Tamsin at 13:02 No comments:

Youngest decided to dress up as a Thestral from Harry Potter for World Book day this year.  Her sisters suggested that she just not turn up to school as people can only see Thestrals if they have come to terms with death and therefore no-one in her class would be able to see her! 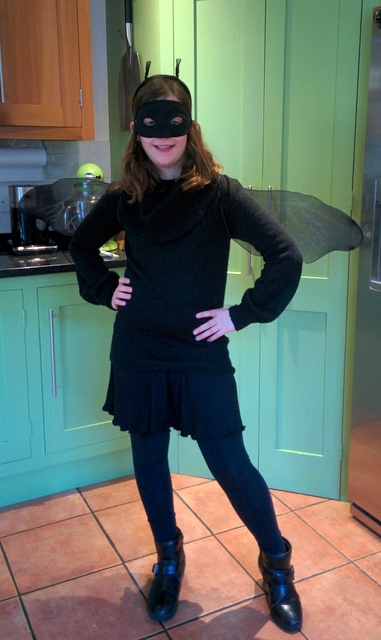 We decided that she could wear all black and if possible get some black 'fairy' wings and mask. I wasn't expecting to find either, it not being Halloween, but our local party shop had wings, headband with ears and a mask - result.  We both felt that she needed at little skirt to cover her bottom as the only black trousers she had were leggings which she normal wears under dresses and skirts.


I had a scrap of black cotton lycra left over from this project, which was just enough to eek out a little skater style skirt. I used the pattern I drew up for Middlest's skirt, but had to reduce the swing of the skirt due to lack of fabric. I finished the hem using my new rolled hem foot that I got in a set of sewing machine feet for Christmas.  It worked really well and I got a nice wavy finish which Youngest really likes. 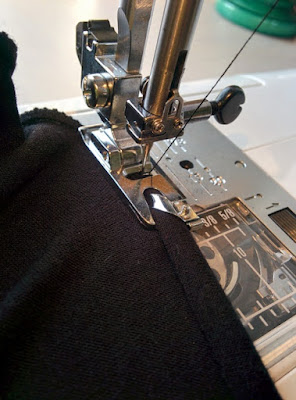 The waist band was 1" elastic as I had run out of the 2" and I think it would have looked too big on her. 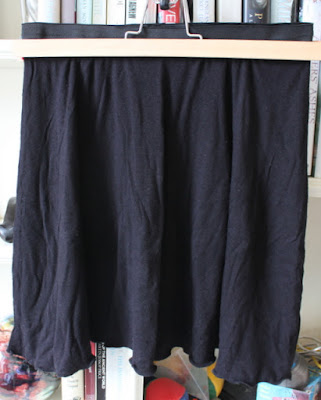 We used the same skirt as part of her outfit as a wood sprite in a new Opera that was staged at our local music venue. Children in the upper years of the local primary schools were all part of the chorus scenes, while drama students of the secondary school where the venue is based, were most of the rest of the characters, with 3 professional opera singers as the main characters.

As ever I have tonnes of catching up to do.  I have done lots of sewing over the last couple of months, but just haven't felt like writing about anything!

I have been spurred on to get writing again by going to a meet-up of Cambridge sewists last Saturday. It was orgnised by Susie of Susie Sews blog and I met a bunch of lovely ladies. We had coffee (and cake) a fabric swap (where I got rid of a piece and came home with 2 more) and a pattern swap.  There was an element of shopping later, but I had one of my girls with me and we had other things to do so we left them to it. We have shared our social media details so I am looking forward to reading some new blogs soon. I subsequently realised that I hadn't posted since February, hence the flurry of posts that will be coming up.

This fabric was bought from Geoff Rosenberg at his Trumpington Village Hall sale in November of last year.  I found it in the remnant corner and asked Geoff how much it was - he said it was ex-Paul Smith fabric and I could have it for (I think) £8 for the whole piece. Once I got it home I realised that I had 4 metres length of 2 metres wide! What a bargain!!!

So, what have I made? First off I made a little skater skirt for Middlest, which I gave to her for Christmas.  We had bought one earlier in the year which I consider is getting a bit short but others wise fits ok. I used the bought skirt as pattern and lengthened it. I basically sewed up the skirt pieces, then attached the skirt to some black 2" elastic and bingo - a skirt. It was inevitably, deemed too long, but it has been worn several times and she is constantly growing at the moment. 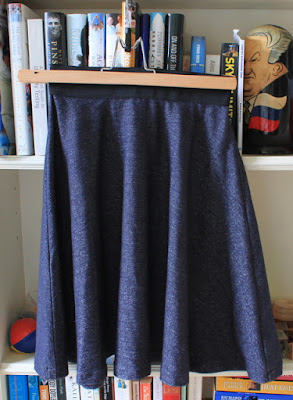 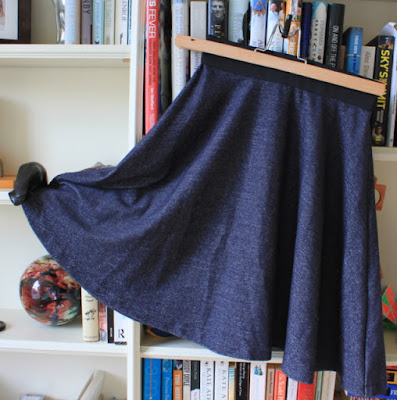 Next up was a Lady Skater dress for Eldest.  Again, we had bought a skater dress, which appeared to be almost identical to the Lady Skater, but with some added detail. I got Eldest to try on the Lady Skater that I had made for myself a couple of years ago to work out what size to cut for her. I ended up cutting out the same size as mine, but I had not realised that the blue fabric didn't have quite the stretch that the ponte of my dress had. I ended up sewing the side seams and armscyes at the minimal seam allowance I could get away with, which did ease the fit a little. It has been worn more than once so counts as a success. 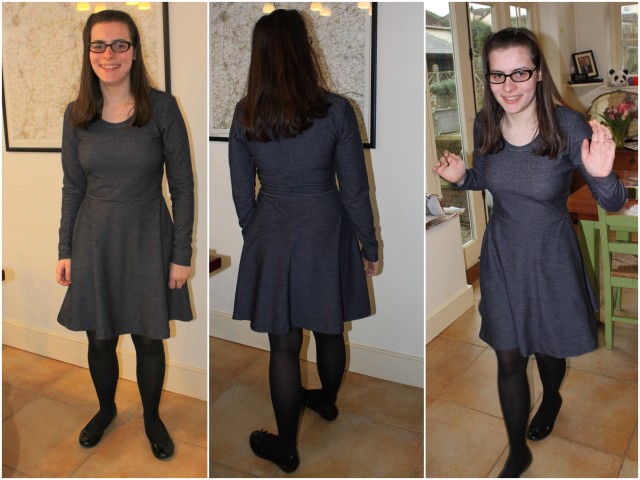 At the same time that I cut out Eldest's dress, I cut out a pair of True Bias Hudson Pants for me.  If you follow me on IG you will have seen that I managed to cut both of those out and still have 1m 20cm left. I am hoping to squeeze a top out of what is left, but I am not sure which yet - I would like another cowl neck Renfrew, but even with the width of the fabric I don't think I have enough for that.
I have made the Hudsons before and decided on a couple of tweaks when I made these. I lengthened the rise front and back, made the pocket bags correspondingly bigger and lengthened the leg a little for some extra ruching at the cuff.  I had meant to reduce the height of the cuff but completely forgot, so I some times fold it up inside the leg when I am wearing them.  Because of the minimal stretch in this fabric the cuffs are a bit tight and I need to be careful, particularly when I am taking them off