This is a present for Eldest. She has a habit of taking a liking to most of the things that I make at the moment. She is currently still smaller than me, but it won't long before she is my size. In an effort to stave off the stealing from the wardrobe situation I made this top for her.

Another reason for this was that we bought her some jade ladies jeans a while ago that were reasonabley expensive. Part of the deal was that she could wear them, but they would be wrapped up for Christmas.  The nearer Christmas got the less happy she was with this arrangement, so in order to take the edge off her disappointment, the top was born. When I chose the fabric I very carefully put the trousers in a bag to take them with me and then left them at home... I was pretty sure it would go.  Eldest also has a number of other items of clothing that this will go with.
I used Sewaholics Renfrew pattern in size 2 and I used the same type of fabric for this as my Renfrew, but in a different colourway. I think this fabric is double knit - I used this Christmas present to determine this. (There are several more colours in this fabric and I am sorely tempted by a beautiful petrol blue and a rather strident red.  The red might have to wait - it is just the wrong red to go with my hair colour!). The fabric is very wide and I found that Sewaholic's fabric recommendations were somewhat on the generous side. I bought 2.1m and ended up with over 1/2 a metre left.

I think that, given Eldest is growing like crazy at the moment, I really should have made it a couple of sizes bigger.  I've had this problem before when making stuff for her - you'd think I'd learn from that... this version fits perfectly, although seems a little tight under the arms to me. If she keeps growing at this current rate she will be passing it on to Middlest within a few weeks.
For me, this was a super fast make - I started the day before Christmas Eve and it was all finished and wrapped before dinner on Christmas Eve - yay!

Here are a couple of detail shots:

Eldest has decided she doesn't want her face in the pictures anymore, hence the chopped photos!

A little bit of Christmas sewing

One of the many things I have been sewing, but not posting, was a Christmas shirt for Husband.  I made him a wearable muslin for Christmas last year which he was very pleased with., using McCalls 6044:

Whilst we were in NewZealand, we bought some material from a fabric shop in Wellington (can't remember the name now) which was obviously bought with this shirt in mind. The picture below was taken in Novemnber 2010, andthe fabric has been sitting in my stash ever since: 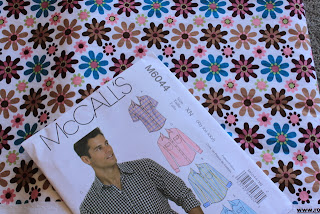 Over the last year Husband has been slowly losing weight and getting fitter. He is very pleased with his progress, but is finding that many of his clothes don't fit so well any more. For example, a pair of jeans that he bought in the first week back from NZ in January 2011 that were a bit snug, he can now take off without undoing them!

The same applies to the shirt I made last year. I felt it was a bit on the voluminous side when I made it, but that is generally Husbands prefered style of shirt, however, since the weight loss it is even more so. I thought it prudent to take Husband's measurements before I started and it was a good thing I did... his chest has gone from 118cms down to 111cms and his neck from 44cms to 42cms. That meant that this time I made a XL instead of a XXXL - yay! Apart from changing the size, the only other thing I did was to make the whole shirt 5cms longer. Husband has a very long back and we noticed very quickly on his other shirt, that any further versions would need to be longer.

Again, no photo's of the construction as it happened.  I only decided to make this about 2 or 3 weeks before Christmas, so for me this was a speedy make, especially as I also decided to make something for Eldest as well (more in a later post).  As I was finishing up on the shirt, Carolyn posted about a shirt she had made for her Husband, in which she referred to a tutorial on flatfelling the sleeve seam. If only she had posted a few days earlier!

I struggled to find buttons initially, but these square ones caught my eye just as I was about to leave the shop and thought they were the perfect fit: 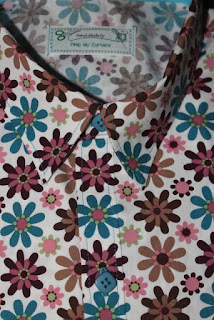 I am very happy with this shirt. It is much better put together than the previous version. The insides look considerably nicer too. I went for the view with contrasting collar stand and cuff and happily found a perfect piece of turquoise in an old pair of trousers that I had tried to butcher in the past. 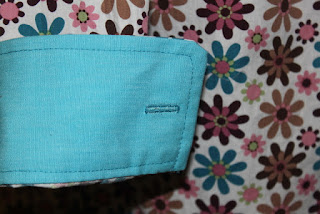 I thought about trying to mimic the previous version with turquoise piping down the button band, but I couldn't work it out with the material I had in the trousers, so just stuck with the collar and cuffs.

I put one pocket on the front: 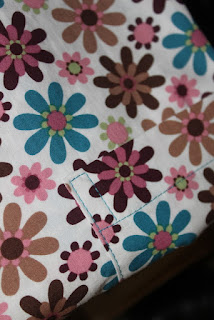 and finally the completed shirt, donned for the day's festivities: 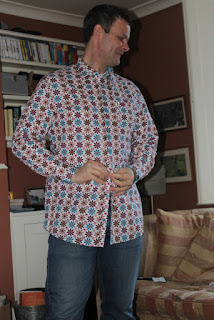 Meanwhile I recieved this from Eldest:

She made it all by herself on a little John Lewis sewing machine that I bought for her birthday!