There hasn't been any sewing going since we got back from New Zealand. We've had a lot of fun sorting out our house and now feel that we are really back at home. Sorting out a sewing space still hasn't happened ..... The spare room became a bit of a dumping ground, whilst we sorted out various other rooms!

It was Youngest's birthday at the beginning of the month, so of course a cake had to be made. I had very strict instructions - it had to be chocolate and it had to be a number 5, and no pink! Not much room for creativity there then. I used a recipe from my Australian Women's Weekly Childrens party cake book, with a slight adaptation, in that I reduced the quantity of sugar in the cake by about 100g. When I have made it before it has been over sweet, and with butter icing on top it was just too much.

Having made the cakes, and trimmed them as per the instructions to get the number 5, I was left with quite a few off cuts that were too nice to not use. After decorating the cake I was left with a large quantity of butter icing. I had a vague recollection of seeing/reading something about cake truffles, so after a quick internet search I found this. I used the recipe as a base - crumbed all the left over pieces of cake and then stirred them into the butter icing. I scooped them into balls and put them in the fridge on a lined baking tray. Whist they firmed up I melted a little plain chocolate and put some 100's & 1000's (sprinkles) in a bowl ready for dipping. 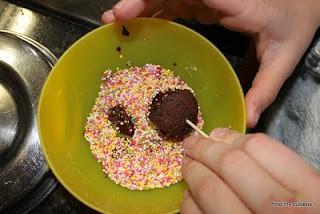 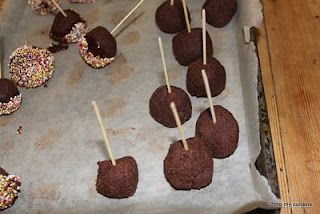 By this time I had a couple of 'helpers' lured by the possibility of sneaking any leftovers! When the chocolate had melted we stuck cocktail sticks into the cake balls, then double dipped into the chocolate, then the sprinkles, and put them back into the fridge. These were then taken into school the next day as birthday treats. The treats went down very well as did the birthday cake itself, however, this seems to be the only birthday cake I have made that I haven't taken a proper photo of.
Posted by Tamsin at 10:32 No comments:

No posts for over a month. We have now relocated from New Zealand, moved back into our house, unpacked some of the stuff we had stored, bought a car, got the girls back into their old school, been on a ski holiday, unpacked more stuff, and now we are waiting for the boxes we shipped from NZ to arrive so we can do some more unpacking!

The unpacking of 'Stuff' has revealed my sewing machine, patterns, notions, a horde of clothing I was planning to refashion, and a small stash of material. Husband has very kindly bought me a dress form as a belated 40th birthday present, which arrived a couple of weeks ago and is still waiting to be unpacked.

Our spare bedroom is going to double as my sewing space, with a bit of re-jigging of furniture, but it is still full of semi-unpacked boxes, but we're getting there. For now I need to sew a bobble back onto a slipper - Youngest has been waiting patiently until I found some needles and thread.
Posted by Tamsin at 12:22 1 comment: