This month’s Simple Sew make is the Simple Sew Kimono Dress - a wrap style dress with a large tie at the waist, except that mine is not going to be a dress. When we were asked for fabric and pattern choices for this make we were in the midst of an extremely hot summer and I had been sweltering in my winter dressing gown in the mornings, so I decided that I would like a summer ‘robe’. 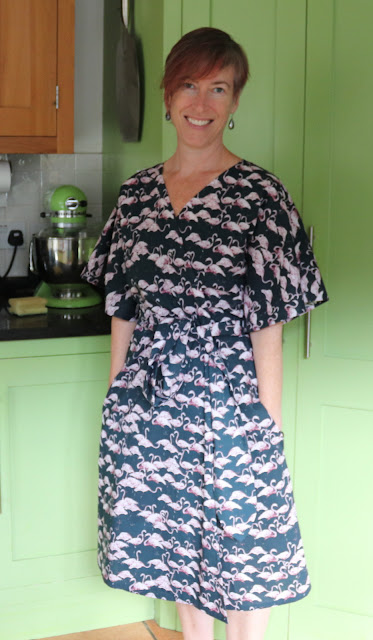 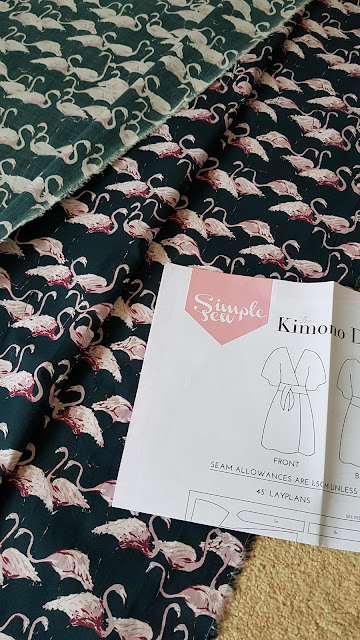 I cut a size 12, but kept the length of the size 20 - I like my dressing gown/robes to be quite long. This style has grown on sleeves which means that sleeve and the body are all one piece. I quite wanted longer sleeves but the front pieces are quite big due to the wrap and the sleeve, so a longer sleeve would have meant that the piece wouldn’t fit on the fabric. 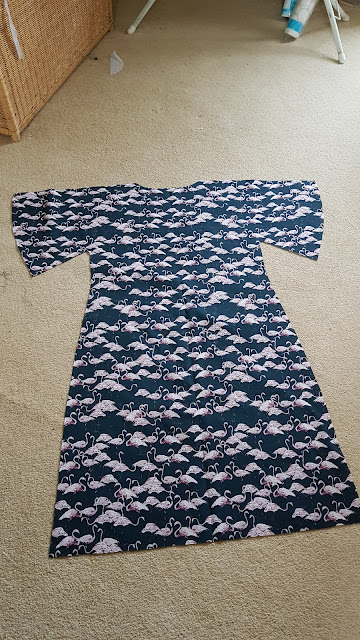 I also wanted pockets so having sewn the shoulder seams together,  I pinned the side seams, tried it on and worked out where I wanted to add the in seam pockets.  My winter dressing gown had large patch pockets, but I felt that wasn’t the look I wanted for this. I used the pocket piece from the Lapwing trousers and placed it roughly where I wanted my hand to rest. 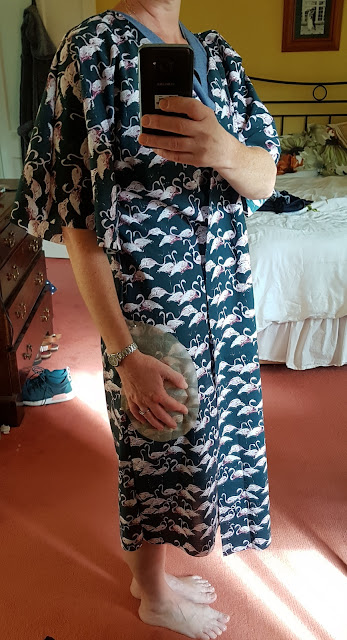 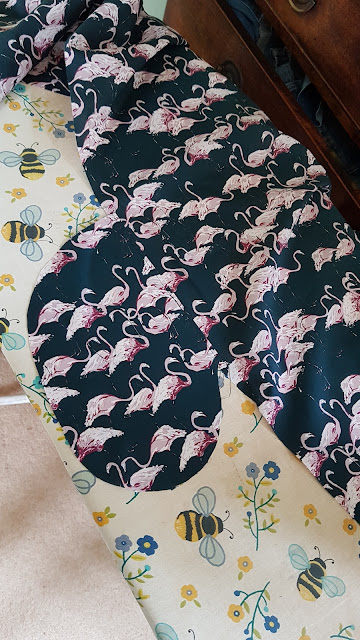 Having put in the pockets and sewn up the side seams the robe was looking pretty good. The instructions have you finish the edge of the front, then turn and stitch down.  I thought this would not give the finish that I wanted, particularly around the neckline  - and this is where this project started to take its time -  I decided to make some bias tape to finish the edge.  I have recently taken out of use a duvet set that was the exact pinky lilac colour of the flamingos. I used a tutorial by Colette for continuous bias binding. This technique is a bit fiddly but I find it much easier than joining lots of strips of fabric. I didn’t think to take pictures of what I did so have included the link.  Quite a small square of fabric makes a surprisingly long piece of bias tape! I machine stitched the bias on to the edge, then folded it over and hand stitched  all the way around the front. Having done that, I then hand stitched the sleeve hems and the hem of the garment. 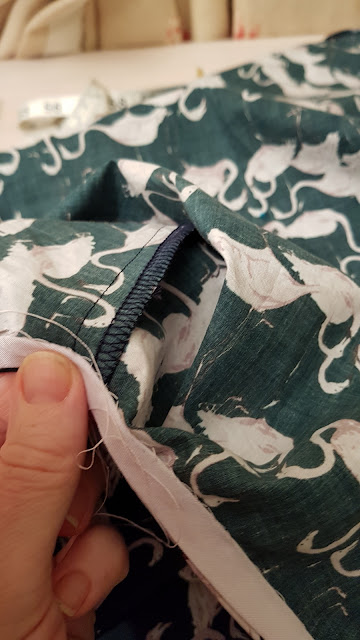 I used some the bias tape to make a rouleau and used it to make a couple of ties for inside the robe to help keep it closed. 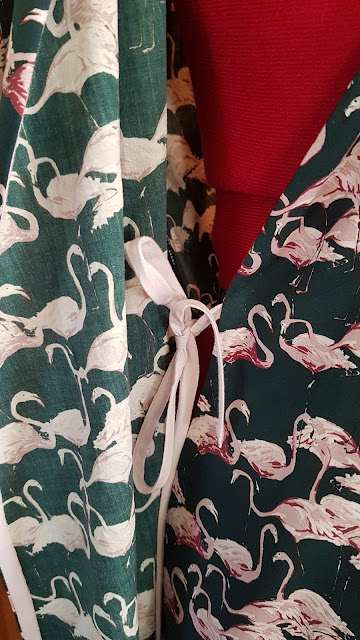 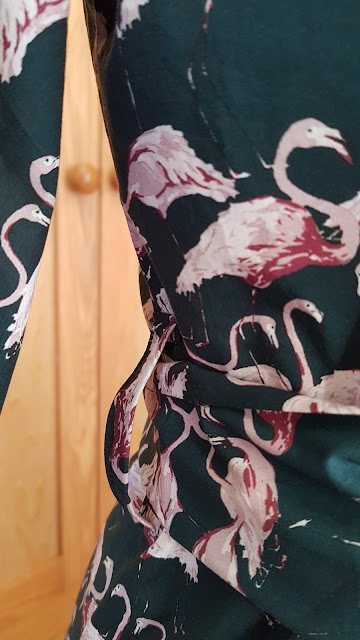 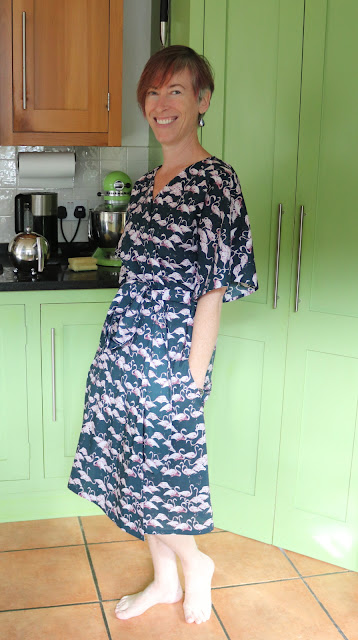 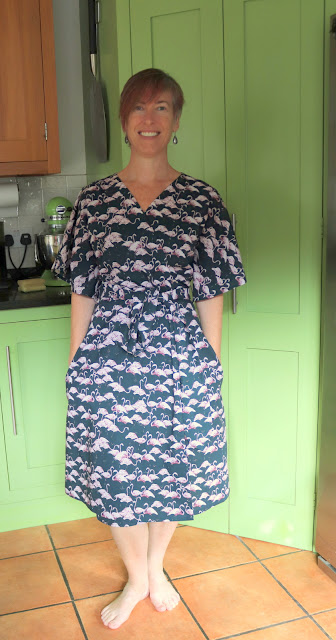 I am very pleased with it and a little bit disappointed that the weather has become much cooler, so I won’t be wearing this properly until next summer. It is a very easy sew and would be quite quick if you didn’t add bias tape and hand stitching to the mix!

At the beginning of the year we found out that one of our much loved cousins had just got engaged. There was much excitement and speculation about plans and clothes! The groom, Joe, got in contact and asked whether I would be prepared to either head up a working party or do it myself, to make him and his groomsmen ties for the wedding.  His initial idea was to have bow ties for all, but on discussion with his mates and brothers decided that they would all have normal ties and he would have the bow tie. 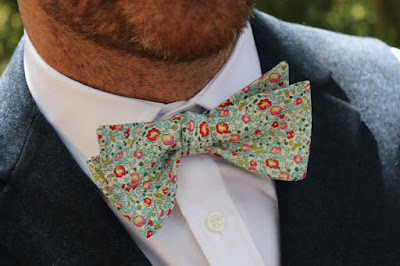 We had a fantastic day shopping for fabric - he had a swatch of the fabric for his suit and had expressed a liking for Liberty style fabrics. I knew Joe was colour blind, but hadn't appreciated which colours he can't 'see' - I spent a lot of time trying to explain what different colours were and which ones were which, which made for quite an entertaining time. I took him to Fabric Galore as I had heard they have a range of Liberty fabric, but we didn't find anything that he liked.  Our plan then was to go to Shaukat in Kensington, and if we didn't find anything there then we would aim for Liberty itself. Shaukat is a shop that sells exclusively Liberty fabric for less than Liberty, and it has masses of stock (much more than Liberty does) both of current fabrics and past.
We got to Shaukat and couldn't believe the range of fabric there. After feeling a little overwhelmed we found the perfect fabric: 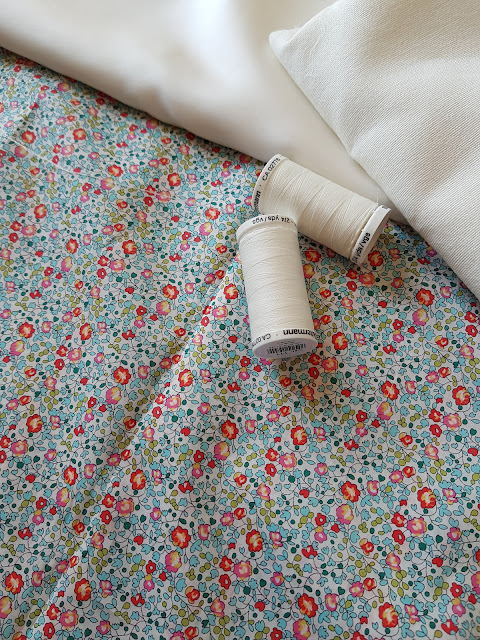 After leaving Shaukat, we went to MacCulloch and Wallace, where I had already scouted out the tie canvas for the lining of the ties and we also bought the silk for the tips of the ties. 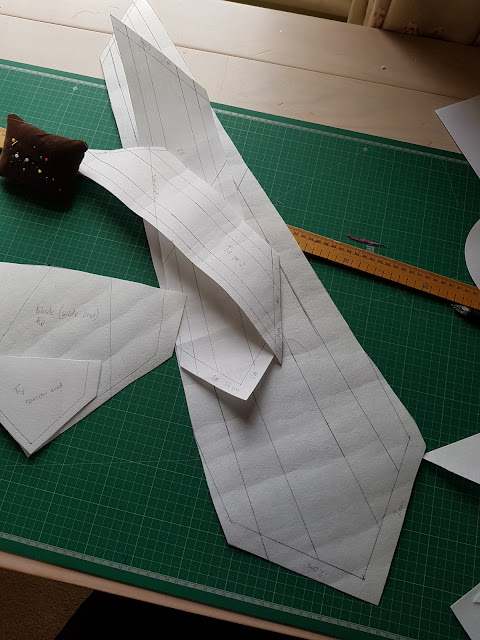 Having made a tie for my husband a couple of years ago, using an old tie of his as the pattern I was ready to go.

I felt that I had a pretty good idea of what I was doing, but wanted to read a bit about tie making before I started.  There are a lot of tutorials on how to make a machine sewn tie, but not much information on sewing a 'proper' tie.  The most informative site that I found regard the making of ties was Thread Theory, the Canadian menswear pattern company. They have a very useful tutorial for making a silk tie, complete with links to various sources that they had found useful.

I tidied up the pattern that I had made from the old tie and had taken on board the request from one of Joe's brothers that the ties not be 'kipper' ties! I had shown him the pattern piece and I think he thought that would be the finished size! There was a lengthy discussion on the finished width of the larger end of the tie - 2 3/4 inches/just under 7cm was the final decision. 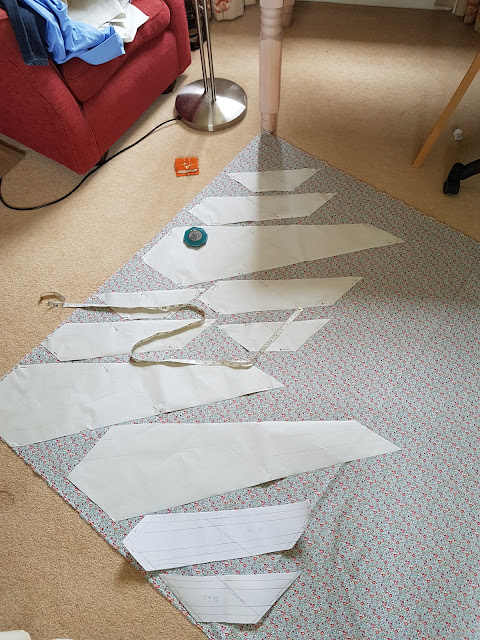 I had done quite a bit of prep to try and work out how much fabric I would need for 9 ties and 2 bow ties (the second bow tie was for the brides dog!). As you can see above, ties are cut on the bias to allow some stretch when they are being tied. I had hoped that there would be a magic formula on the internet but I couldn't find much that was helpful. I ended up cutting multiple tie pieces from paper, laying them out and measuring the amount of space they took up.  Unfortunately I did not make a note of the metreage I thought I would need, nor the amount that we actually bought. 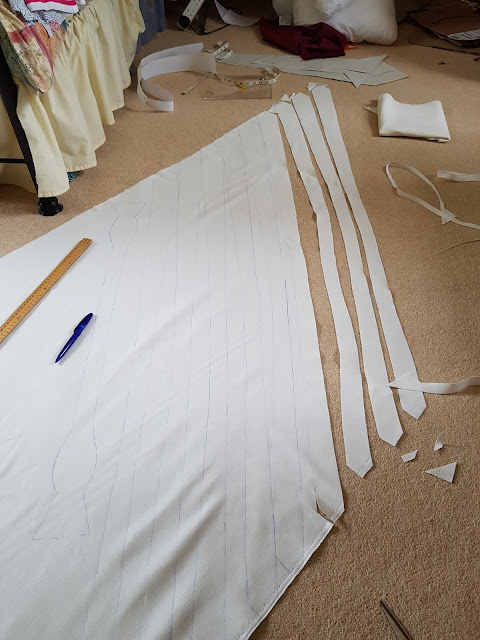 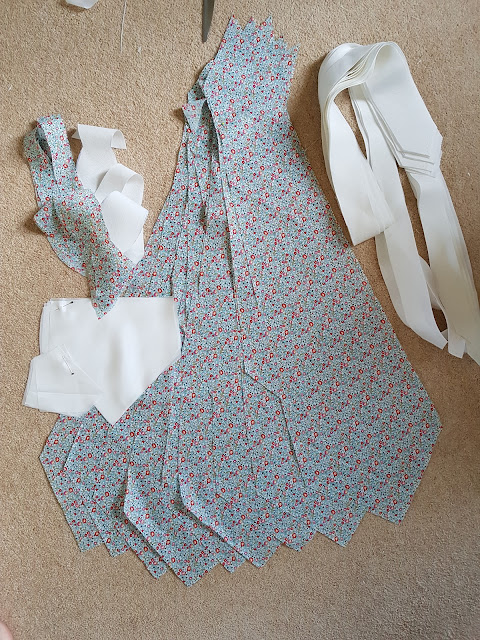 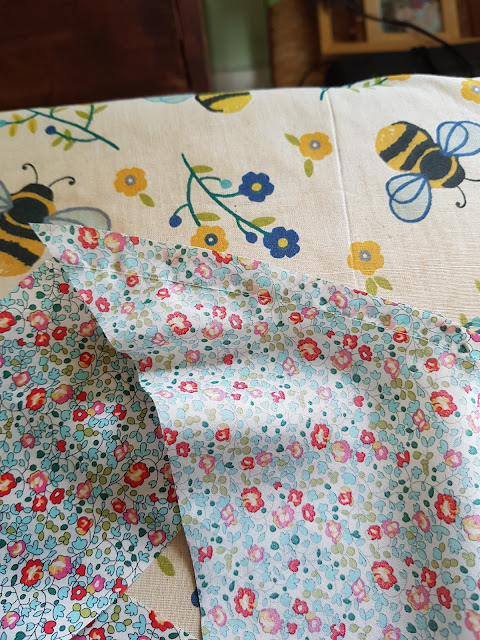 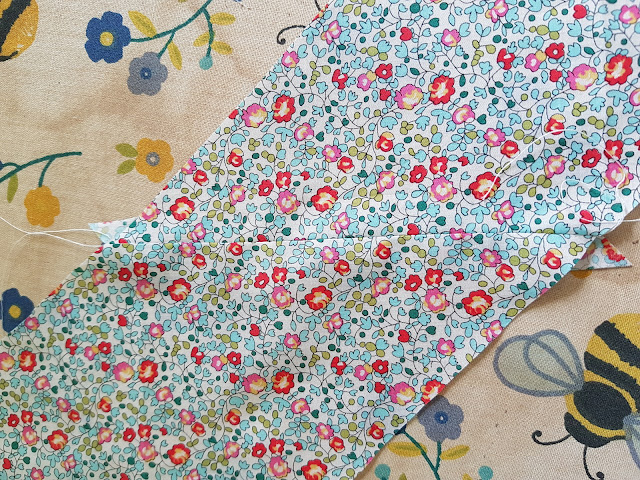 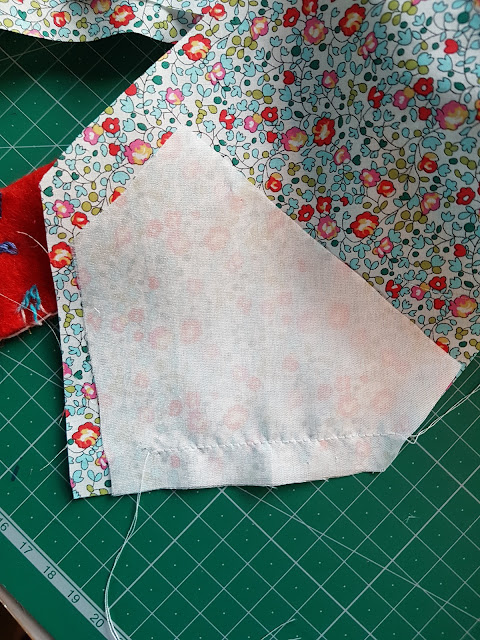 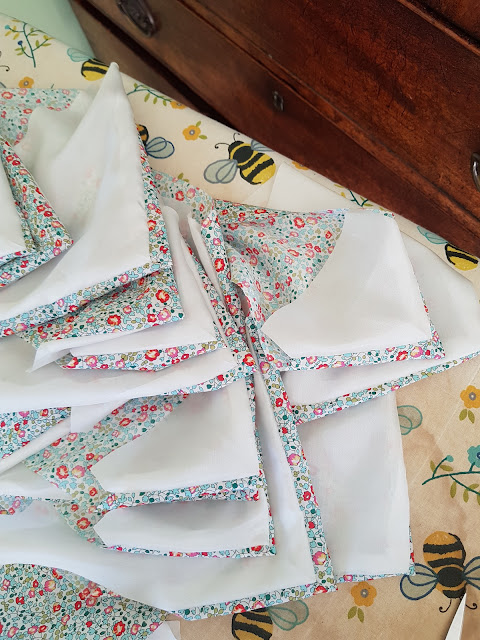 Having constructed all the ties and pressed all the tips, I then added the tie canvas - the strip of canvas is laid down the middle of the tie, then the edges are folded in. These edges can overlap slightly and this is the central seam down the back of a tie.  This seam is hand sewn carefully so that the stitches are not too tight. If the stitches are too tight then the tie can pucker and not stretch sufficiently when it is being tied. 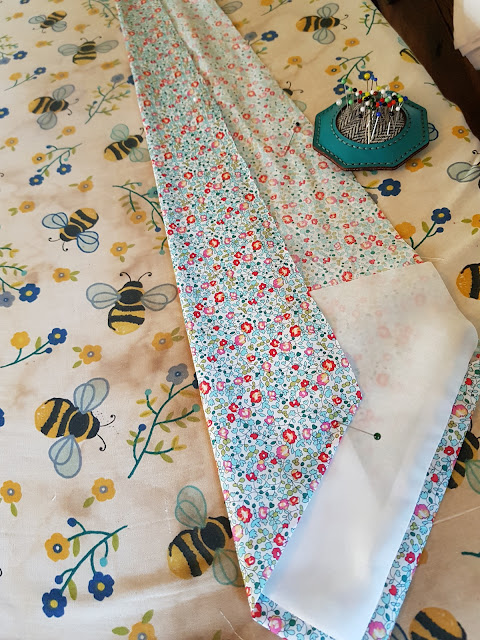 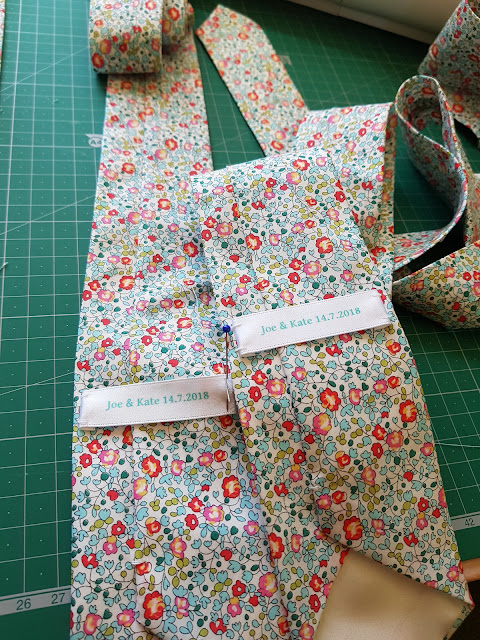 Having completed all the ties I was super pleased with how they had turned out, but I wanted a little extra to make them even more special. I thought it would be nice to put some sort of label in and spent quite some considerable time trying to find somewhere that could do a small quantity of printed fabric labels. After extensive search of the internet I found a company called Bags of Love whose minimum order was 20 (still more than I needed but much better than 50, 75, 100, 250 that all the other places I had found) for about £20. You can chose the size of your label from a selection, add text, colour of text, images etc.  I chose to have the bride and grooms names and their wedding date in a colour that went with the tie.  They looked perfect and I was almost as pleased with the labels as I was with the ties! 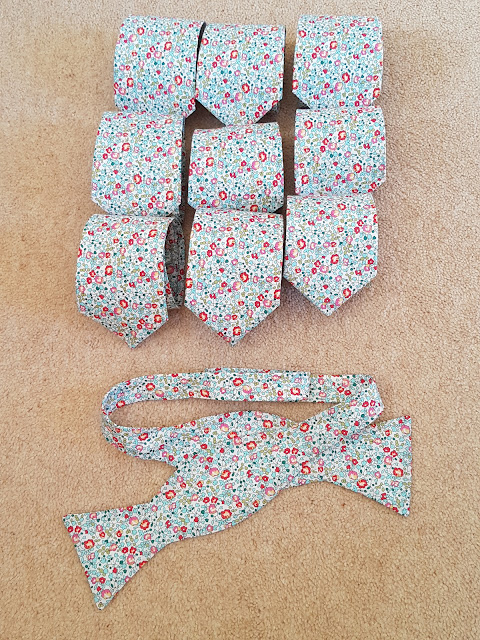 I used a pattern for the bow tie that I had found on the internet - the one I ended up using was from Sew Like My Mum. This was one of very few patterns for tie-able bow ties, rather than a pre-tied nonadjustable bow tie.  Making the bow ties was pretty simple, the trickiest bit was turning the ties right side out and making sure that the corners were nice and crisp. A good press made what started off looking like a crumpled rag look pretty smart! 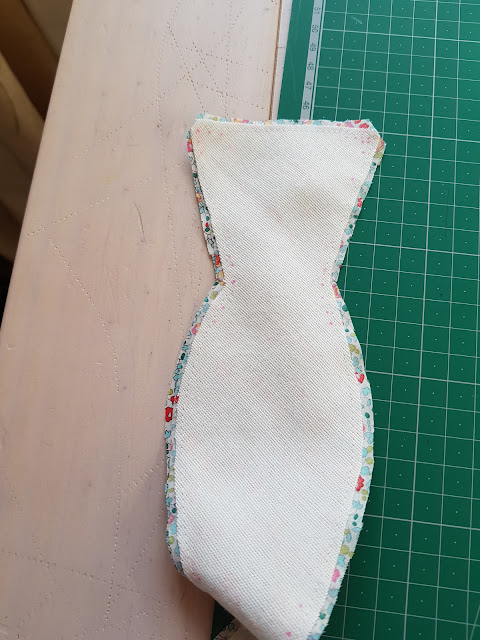 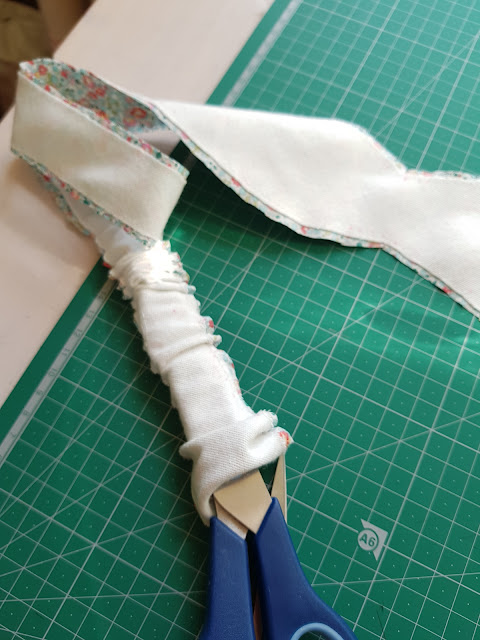 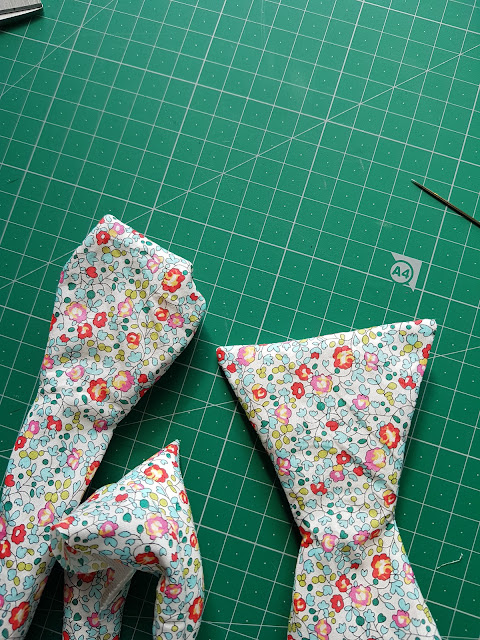 So after all that, here are some pictures of the ties in action: 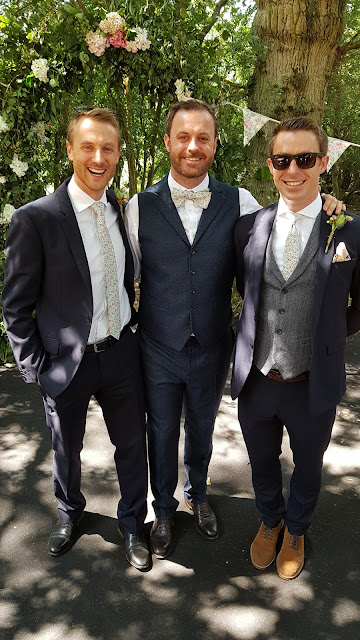 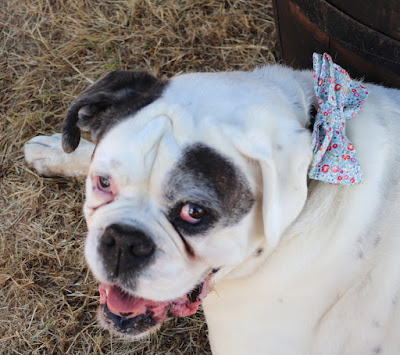 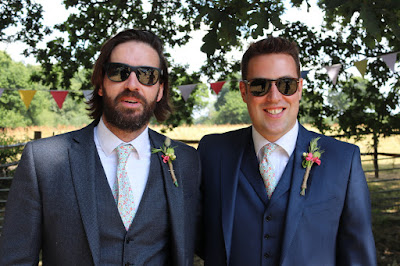