I made a WEDDING dress!

Next in my catching up posts is the project that was taking up all my 'spare' time before Easter. I hinted at this in an earlier post:

I was making my sister's wedding dress!

no pressure or anything....

My sister, Holly, asked me if I would consider making her wedding dress probably around this time last year.  We had long discussions about styles and eventually types of fabric. I was keen to do it as long as the dress wasn't too complicated and the fabric was manageable - I didn't want to say yes and then not be able to deliver. We settled on a pattern:

and decided on the lace overlay of view B with the long drapes at the back of view C.

Towards the end of last summer I took her to Goldhawk Road and Soho to look at fabric, just to get an idea of what was available and what kind of thing she liked. There was much discussion about the samples that we picked - which lace looked best over which other fabric, differing tones of ivory, champagne and cappuccino, how to incorporate some features she had seen on dresses that she had tried on....

When she finally decided on the lace she wanted, the shop (in Goldhawk Road) had sold out.  A little bit of panic browsing in other shops didn't come up with anything else she fancied, however John Lewis turned up trumps - a beautiful embroidered silk organza in the perfect colour and half price!

I made a toile from a very cheap poly satin (£2 a metre), following the size indicated on the pattern envelope for her measurements.  It turned out to be enormous in all directions. I know pattern companies add quite a lot of ease to patterns but really...  Next I compared her measurements to mine as we are quite similar shapes. Most of her measurements were within a centimeter or two of mine, so I had a brainwave - we had not long completed paneled skirts in my pattern cutting class, so I pulled out my paneled skirt pieces, laid them on top of the pattern pieces and worked out I need to go down a couple of sizes and we'd be just right.  I started on the the dress at the beginning of February and the Wedding was in April - it didn't seem a long time but I spent every moment I could on it just to be sure I could get it  finished before Easter to the standard I wanted. I'm sure that I could have done it quicker, but the rest of my life had to be lived too!

The rest of the post will be mostly pictures, so bear with me!
I had to cut out all the pieces three times - main dress fabric, the overlay and the lining - luckily I have quite a bit of floor space


After my sister had tried the dress on a few times I felt that it needed a bit of weight to help it hang well. My mother in law very kindly got some special hem weight cord from McCulloch and Wallis in London.


When Holly had been looking at dress ideas she had seen one of a similar style that had layers of chiffon on the bodice to preserve modesty in that area. As this had quite a plunging neckline, she had asked me to come up with something similar.  I used two layers of a crinkly chiffon cut on the bias and of different widths. I was concerned about how to finish the edges, but on close inspection of the inspiration photo we concluded that the edges had been left raw - this is what I came up with: 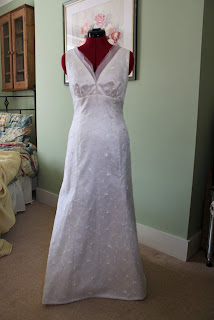 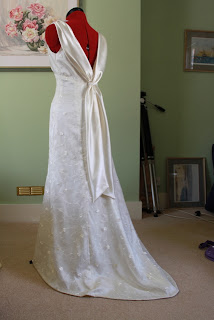 In the run up to the wedding Holly had done the usual bride thing of losing a bit of weight, which meant on her final try on before I went on a skiing holiday (arriving home 4 days before the wedding!), I had to try and tweak the fit easily.  Luckily, the drapes at the back could be arranged in such a way that all I needed to do was add a small hook and eye at the back and no-one was any the wiser!

On the day itself, the forecast was not promising and ended up being pretty windy, wet and chilly. This meant that even in the official photos there are hardly any of Holly without warmer layers on top, making it pretty hard to see the dress:

Probably the most important thing I have ever made and I'm super pleased with the way it turned out! She was a beautiful bride and I was proud to have been involved in her special day in such a special way.
Posted by Tamsin at 23:16 9 comments:

The day the sun shone...

I have a lot to catch up on on here, but I am going to start with the most recent first... the amazing blogger meet-up arranged by Rachel of House of Pinheiro.

On Saturday 20th April Saturday, approximately 40 sewists descended on the entrance hall of the V&A in London. After lots of introductions we proceeded to the cafe where many more introductions were made, many coffees were drunk and a lot of chattering chattered! Rachel had arranged for a professional photographer to come and snap us all in our finery, and as we all got up to follow him outside, the cafe suddenly seemed a much quieter place.
It was fantastic to see so many home sewn garments and very interesting to hear how people got on with different patterns.  Other peoples fabric choices always interest me, mostly because I often find it difficult to match fabrics to patterns. There were a number of Elisalex dresses out and about, which I have to say didn't grab me when I saw the pattern had been released, but the dresses looked fab in real life.

After our photo session, we were guided onto the underground and made our way to Goldhawk Road. I think one of my best bits of the day was all of us sewists pretty much filling up a whole tube carriage, chattering away nineteen to the dozen (what a strange phrase). The stunned silence from the remaining passengers as we all got off after one stop was noticeable - one doesn't chat on the tube you know!

On reaching Goldhawk Road we had a good hour and half of shopping time, during which I bought three lengths of fabric (all jersey) and admired many more, then it was  off for lunch.

Janene of Ooobop had arranged for us to have lunch at a Lebanese restaurant a short walk away, where again, we took over the entire place and enjoyed some pretty fab food.
After lunch we had the swap to end all swaps. the restaurant had an amazing downstairs where the swap items were arranged into groups of fabrics, patterns and notions. Sew Busy Lizzy visiting from Tasmania had a huge bag of stuff from Abakhan Fabrics and Minerva Crafts had donated goody bags for us all.
I came away with three more pieces of jersey and two wovens, one being a cheese cloth-y type fabric and the other a white embroidery anglais with a sheen of gold sparkles (which you might be able to see in the photo): 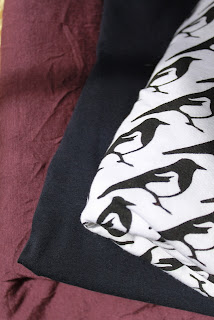 I also managed to pick up  couple of patterns: 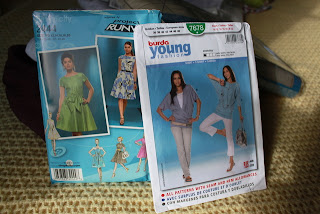 It was so nice to catch up with people I've met before and to meet heaps of new people.  There was an ongoing discussion throughout the day on how do you greet someone you feel you know really well from their blog, when in actual fact you haven't met them before... There wasn't really an answer, but given we were all asking "is that a {insert pattern name/number}?" that seemed a pretty good opener!

Many thanks to Rachel for organizing everything - I was so exhausted, I can only imagine how she felt at the end of the day!

Photo's from the photographer  Digpal Singh are available to view here.

Rachel has a list of attendees and their blogs in her post of the day. There are quite a few that I haven't come across before so lots more reading for me!