I made this cardigan/jacket to wear with my BHL Anna Dress that I wore for a wedding earlier this year. 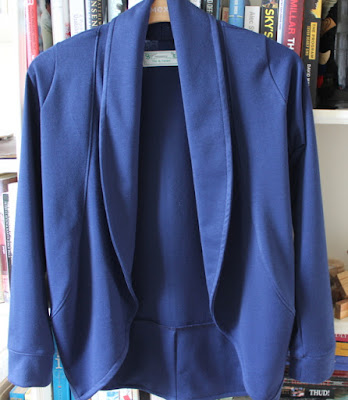 The fabric is a navy blue ponte knit that I bought locally and have had for a couple of years. I bought it to try and knock off a dress that I had seen in Crew Clothing and had never got round to making (I even have the sparkly fabric too). The pattern is the Julia Cardigan from Mouse House Creations, which I bought as part a pattern bundle a couple of years ago. It is a downloadable pdf. I quite enjoy putting these together, unlike many people! It takes me back to living in NZ and rediscovering sewing with free downloads from the Burdastyle magazine. 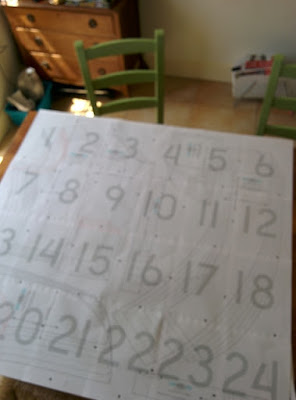 I just about managed to squeeze the pattern out of the quantity of fabric that I had. I think I had about 1.5 metres and the pattern calls for considerably more than that. I employed some creative cutting and ended up piecing the inside of the back edge.  I choose the view that has the double layer at the collar/edge as it doesn't need hemming and I wanted it to look good with my dress - I wasn't sure that turning the edge under and stitching would look as nice.

I really like the pattern, it was an easy sew and the instructions were fine. I am pretty sure that I put it all together with my overlocker and just did a spot of top stitching on my sewing machine. Once done, I tried it on with the dress and even ordered some shoes and a bag to go with it all.  It looked good, but I felt it was a bit casual and I had in the back of my head that I wanted something a bit more striking - and the BHL Victoria Blazer was born!
Having worn it as a cardigan alot over the summer I really like it and would like to try it in a different fabric for a more slouchy version.  If I make it again I think that I would grade up to a bigger size across the back of the shoulders. I feel that this one is a little tight and the back of the armscye is distorted when I wear it. 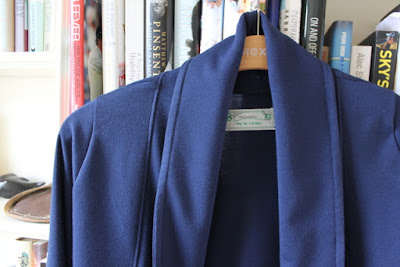 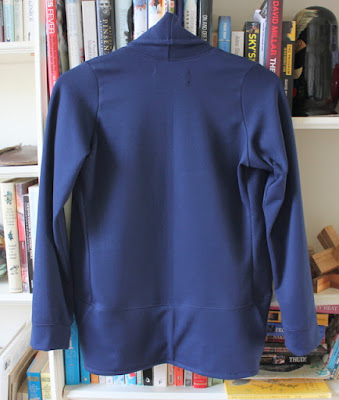 In my previous post I showed the Anna dress that I made to wear to a wedding.  Here is the jacket that I wore with the dress.  It is, as one commenter asked, the By Hand London Victoria Blazer. I have had this pattern for a while as my reward for supporting BHL in their Kickstarter efforts to start printing fabric. 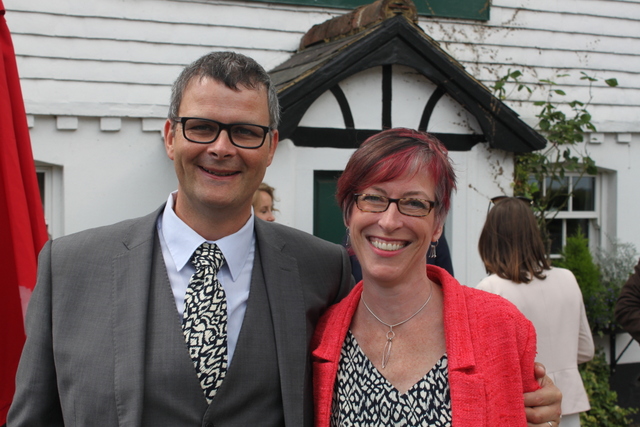 I have seen many versions of this over the few years with varying opinions on the pattern and style.  I have not been that sure of the style especially the longer length, it being quite slouchy but cropped version looked quite cute in most of the versions I have seen. 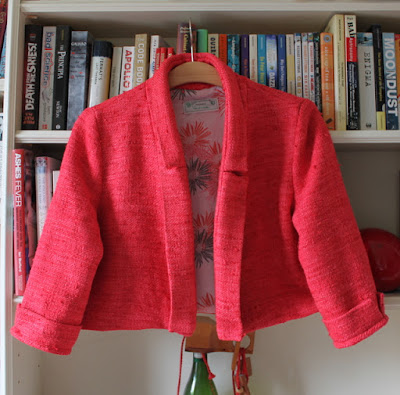 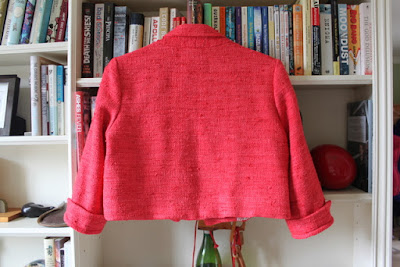 I picked up the fabric at a fabric swap that I went to in London in May or June.  I don't know who donated it but there was loads - at least 3 metres if not more. I wasn't sure what the composition was or whether it was washable so I cut a square, zigzagged the edges as it frayed like crazy and popped it in the wash with a bunch of similar coloured stuff - just in case the colour bled out.  There was no discernable shrinkage but the colour did seem fractionally paler. I then chucked the rest of the fabric in the wash on its own and was very thankful for my large washing machine! My mother-in-law informs me that it is almost certainly silk.  It pretty thick, feels quite rough and a tiny bit scratchy.

Because of the thickness of the fabric it was really hard to cut - not helped by my scissors not being the sharpest. The lining for the body is taken from an old White Stuff skirt that I had hardly worn - I liked the fabric but not as a skirt and the colours looked really good with this coral. 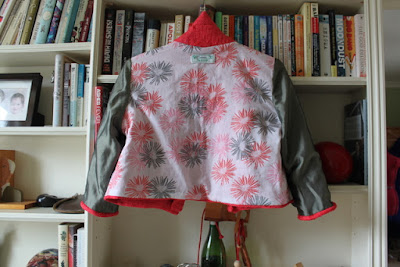 The pattern doesn't have you line the sleeves, but I knew that I wanted to line mine. I used the same fabric for the sleeve lining as I used for my Sewaholic Minoru sleeve lining. Again it goes well with the lining of the body.
I had noticed in my internet researches that many people commented on the lining of the jacket going right up to the front edge of the jacket and that the lining often peeped out when being worn. I found an excellent post by Nicole Needles describing the steps for drafting a facing for the front edge. This also involves slightly redrawing the front lining pieces. I followed this and drew out my own facing which you can see here: 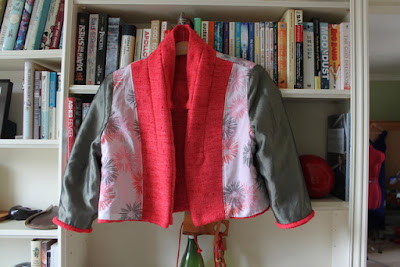 I wasn't 100% sure it would work due to the thickness of the fabric but fortunately the fabric pressed really well so I steamed the heck out of it and it was fine!

The was quite a bit of hand stitching involved with the lining, but I quite enjoy that. 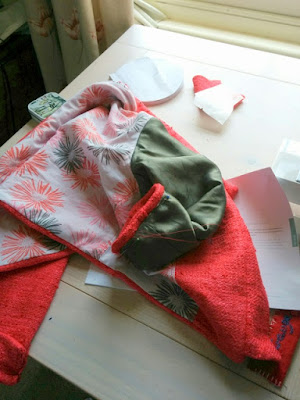 Here are a couple of details: 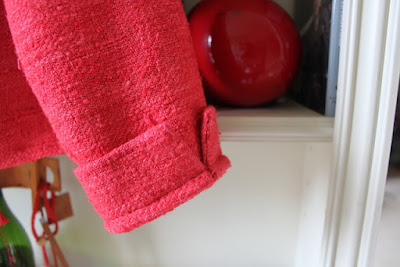 The jacket is quite swingy at the back and initially I didn't like it. I considered putting in darts at the back like Shannon at The Modern Tomato did with her blazer, but once I tried it on with the dress, I actually liked the shape with the nipped in waist of the dress.
This was actually the second jacket I made to wear with this dress. I am really glad I went to the extra effort for this jacket as I love the pop of colour. The first is fine but not as smart and will have a post of its own soon (ish!)