FO's: I bring tidings of Magpies

More catching up, but this time I am covering three makes in one post:

This all started at the epic meet-up that Rachel of House of Pinheiro organized back in April. I had bought my fabric (still mostly uncut by the way), lunch had been eaten and then the swap began.  I felt a bit bad that I hadn't anything to bring to the swap, but was assured that this didn't matter at all. The swap was divided into three sections, fabric, notions and patterns. In trying to move out of the way (it was pretty busy) I came across Marie from A Stitching Odessey clutching various fabrics on her way to the swap table. One of the fabrics was this amazing magpie jersey: 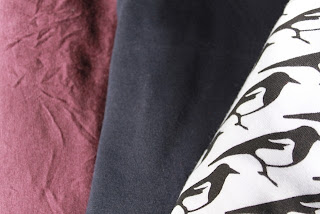 I managed to snaffle that, with an idea of what to make with it, then on the pattern table I found just the top to action my idea: 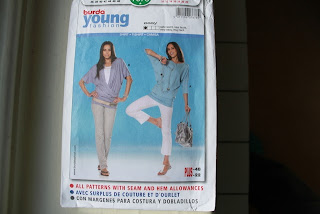 I washed all the fabric almost as soon as I got home, so was able to start this top fairly swiftly.The magpie fabric was lovely and soft, I think there was probably between 2 and 3 metres of it. I wanted to make a batwing style top and chose to make view A.  I think I must have been subconsciously inspired by Zoe of So Zo who made her own version a while ago.

I made a size 12 and the only slight change I made was to reduce the width of bottom band by half. The top is pretty long - it would have almost been a dress had I not done this. Here is a very dodgy phone picture:

and here it is being worn 'normally': 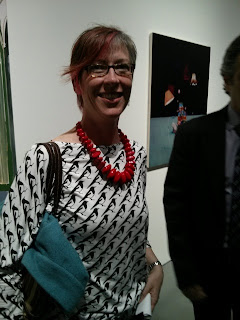 The painting in the background is by Husband's super talented cousin, Bartholomew Beal, who was featured in the Guardian guide exhibition section last week.

Make number two is another top for me, this time a short sleeved top made using the free Kirsten Kimono Tee pattern from MariaDenmark. I made a small, but think I could go down to the extra small as the top is described as having negative ease at the bust and mine is a bit billowy .This was a pretty simple make, apart from the neckband. I had real problems attaching the band and after unpicking it twice, I thought that the fabric probably wouldn't take much more so I just turned the edge over and topstitched using a zigzag stitch. I have worn this top loads over the summer - it was perfect for keeping cool on our hot summer days:

And, last but not least, the last top was made for Eldest as a birthday present.  In the run up to her birthday I had a week 'sewcation' at home with Husband, minus the girls. Husband read books, I sewed - more on that later.  I made another Kirsten Kimono Tee, this time in the extra small using the scraps left from my previous tops and some black jersey. There was not enough to make a whole top so I used what I had to make the back out of the magpie fabric and the front from the black. I had to make a seam down the back to get it to work: 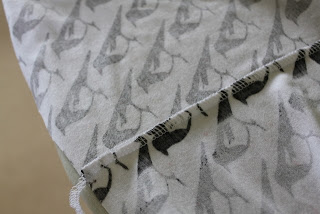 I even went as far as to make a little contrasting pocket in the magpie fabric, but I didn't sew it on. I wanted to give her the choice and I also didn't want to sew it on in the wrong place. I had a play around before I wrapped it up though: 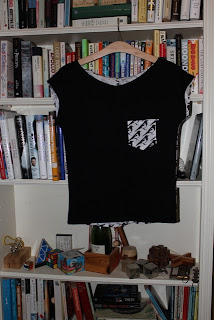 and here it is on the birthday girl, she chose not to have the pocket: 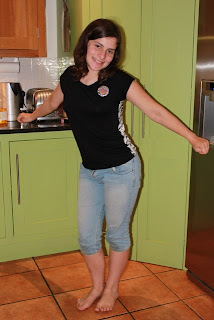 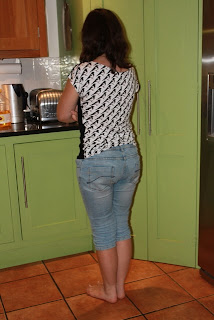 I love all of these tops, thanks to Marie for giving up her fabric and here's to three free tops.

A 'tiding' is one of the many names for a group of magpies, others being gulp, murder, or charm. I wasn't quite sure how incorporate 'gulp' or 'murder' into a post title!
Posted by Tamsin at 11:10 2 comments:

FO: In the Navy - Fleece Renfrew

This is the first of several catch-up posts. This top first saw the light of day in MMM13. 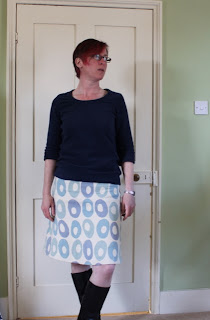 I had seen earlier in the year that Winnie of ScruffyBadger had made a fleece cowl neck Renfrew and I mentally filed that away as 'something to think about'. May was pretty chilly I seem to remember, and our local market has a fabric stall at the Tuesday market selling fleece at £3.99 a metre. This seemed pretty reasonable and I think I bought a metre and a half. I squeezed a three quarter sleeve top out of it with minimal scraps.  I have a RTW jumper that is navy with three quarter sleeves which I was trying to copy sorry, use as inspiration.

It is not the most successful top I have made. I didn't take into account that the fleece has hardly any stretch. I made the same size as my Autumnal Renfrew, but after getting trapped in my top the first time I tried it on and having to get Middlest to peel it off me, I unpicked the side seams and sewed again with minimal seam allowances. Unpicking navy stitching in a navy fabric that the stitches just seem to disappear in... not recommended.  I also made the rooky error of not checking the length of the three quarter sleeves. Guess what? they are too short. The cuff seam lands right at the crook of my elbow which is really uncomfortable - mid forearm would have been ideal.

And lastly, the stitching round the neck band - which is really necessary in this fleece to hold the seam allowance down - is too tight:


It pulls the fabric in somehow and makes it look a bit odd. I really must unpick it and either try a different stitch tension or try hand sewing it down, but given the comment above, I am not super keen to do that!


It is wearable, but in a 'pottering about the house' kind of way rather than 'out in public' kind of way. Oh well, not everything is as successful as I'd like and at least I know what not to do next time!
Posted by Tamsin at 12:30 1 comment:

Back to school tomorrow...

I still have a lot of makes to put up here and I have managed to do quite a bit of sewing over the holiday, which doesn't normally happen. They will appear here in due course.