Having had the prototype of the fabric flowers accepted by the Garden Walk committee, the next step was to choose some fabric. Lorraine and I went to Timaru to visit fabric shops. One of the fabric shops was having a closing down sale, where we found a lovely orange gingham. We bought what was left on the roll, which was just about 3 metres. 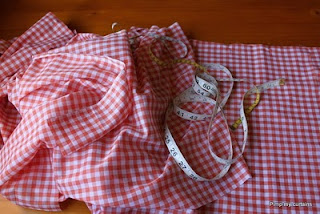 I then spent some time cutting up the fabric into suitably sized strips (9cm by 37cm) and ended up with 99 strips. 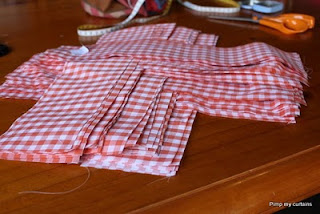 It was decided that we needed more than 99 flowers. Last year 120 tickets were sold, and so I went shopping again. Since we had been shopping last, the original shop had closed. I checked out the other 2 fabric shops and, surprisingly(!) couldn't find any matching gingham. I did find a plain orange cotton that matched the gingham perfectly and bought 3 metres. This was when I got some of the samples of fabric mentioned in a previous post. I cut the new material into same size strips ready to start sewing.

We were initially going to have the two flowers, orange and gingham. Lorraine and I decided that it might look good if we had some flower that had both fabrics in - this meant that I cut about half of the gingham and half the orange strips in half - still with me? and then sewed the gingham to the orange to create two-tone strips. 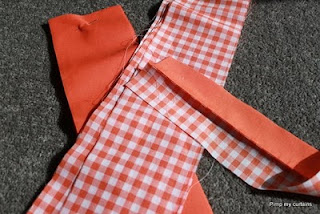 So now the plan is to have 4 flowers: gingham, orange, orange/gingham and gingham/orange! 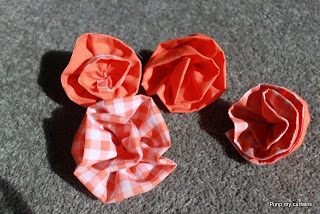 The programme for the walk will be coordinated with the flowers. The sewing has been divided between some of the Garden Walk committee members, with each person getting about 34 strips. Certainly do-able even if some people openly admit they are not that proficient! I provided instructions and photos of each stage which I will link to soon.
Posted by Tamsin at 01:44