FO: A Jasmine for Tamsin

This blouse was finished just before the end of last term, but I haven't got round to posting much recently. 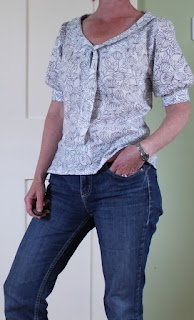 I have been admiring the many Colette Jasmines that are out there and and it took me a while to decide that I *did* like it more than the Violet blouse.  This was one of my favourites as was this one and this one.


The fabric was bought at the end of last summer's holidays.  For some reason I took the girls down to Lakeside Ikea (we must have been running out of things to do!) We didn't get much, but whilst checking out the bedlinens, there was a huge basket of duvet/pillow case sets on sale.  I had a look, the pattern was pretty, checked the price - £2.99 for a double duvet set! Into the trolley it went! The girls were all up for me getting the King size set for £3.99, but I felt there was probably a limit to the number of things I could make out of the same pattern. Don't want to end up looking like the von Trapps!

The blouse was pretty straight foward. I could have done french seams, but I seem to take forever to make things, so went for the easy, serged/overlocked option. I think the sizing is pretty good, I can't remember what size I cut out.  However when I was making the sleeves, I suddenly looked at the cuffs and thought 'there is no way that is going to get over my elbow'. I don't think I have abnormally big elbows, but sure enough, when I tried to slide the cuff over my elbow it wouldn't go.

I took a short cut and just sewed much narrower seams, but having worn it quite a lot over the summer (with no decent photo's), there is still not enough room for comfortable movement. Every time I move my arms, the sleeve moves upwards and then gets stuck, so I then have to try and wriggle it down again.
This is pretty irritating, so I will definately need to do something about it - either cut new, larger, cuffs, or make a new one. (Eldest had her eye on this one before it was finished).   Another thing I noticed is that the neckline is a bit wide for my shoulders and tends to slide a little to one side, showing my bra strap. Something to remember for another make.


One of my favourite bits is the little loop that the ties go through: 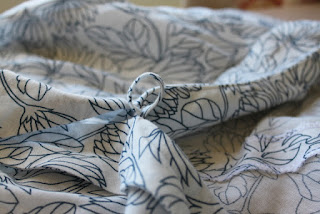 And for something totally unrelated, but one of the reasons I haven't done much sewing/blogging over the summer; gardening and the frog I found the other day! 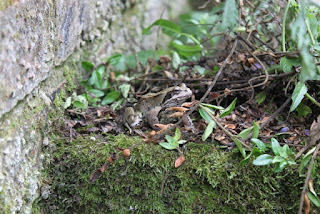