A collection of collages and another sad summer

This is a long post, grab a cuppa, try not to fall asleep! I have noted before that my blog gets a lot more attention from me during MMM as it tends to highlight all my un-blogged makes, even with semi-regular posts I still don't seem to have caught up yet! I wanted to do individual posts for these but I seem to be running out of oomph and have other things to think about - more of that at the end. I have been sewing a lot so have quite a few things to mention here - they are in no particular order.

Self drafted trousers
I mentioned these in a post a little while ago.  In my pattern cutting class we transformed our skirt block into a trouser block. Had I written this at the time I made the trousers, there would be a lot more info on how we did this. Right now, I can't really remember! I had been desperate to learn how to make trousers to fit rather than faff about with a pattern and an assortment of alterations, but it took me a good 4 or 5 months to put my pattern into use - and this was all about a year ago. I used an interesting mystery fabric from a local charity shop - £4 for nearly 4mtrs and I think it is a wool blend. I have washed the fabric several times and the resulting trousers. The fabric shrank lengthwise a little the first time it was washed but not since, and the trousers have shrunk a little in the leg nearly every time I have washed them. They were hemmed to be the perfect length for a specific pair of shoes, but now they are a fraction short with not much hem to let down, sigh.
Eldest's dress
Eldest was keen for me to make her a dress a little while ago - she is a happy recipient of mum-made clothes. The pattern I used was Simplicity 1699 which came free with a sewing magazine I picked up one day. As noted before, Eldest is much bustier than me so I thought this would be a good dress style-wise because of the princess seams on the bodice - they would make any fit changes a bit easier. She is also quite petite so I had to shorten the bodice. I bought the fabric at Backstitch when we visited for for the shop's first birthday back in March. There is very annoyingly, a seam down the centre front, which I totally didn't take into account so there is a slightly dodgy pattern running down the skirt. Eldest and I have agreed to ignore it. A sneak peak of the dress was seen in this post. You will see that she opted for the more discrete sleeve edge. She has already asked me for another dress using the same pattern. I have cut it out and remembered to cut the skirt front on the fold! 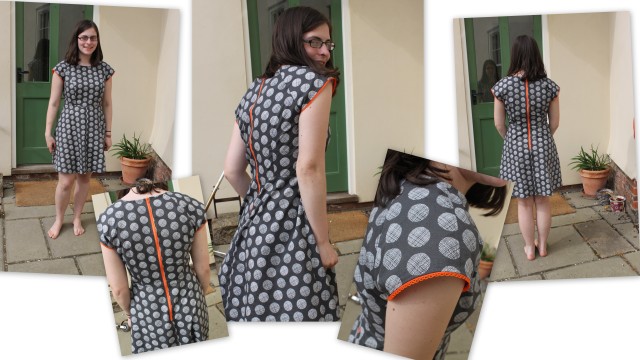 Indecision averted
A little while ago I was berating myself for being indecisive when it came to choosing a pattern for a dress for me. I ended up making the BurdaStyle dress which I had had my eye on for some time. I chose it because it was a bit different and thought it would go with my fabric well. I have only worn it once on a night out with some friends - none of whom could believe that I had made it! and I didn't get any photos of it on. Middlest had thought it was too trendy for her Mum, but thought it looked much better on me than she thought it would.... 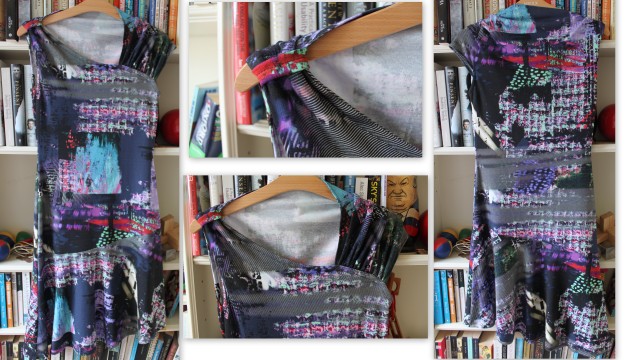 True Bias Hudson pants x 2
I made the first pair of these during MMM - I have worn them to lounge in and to go to the gym in. I wasn't sure about the style but having seen loads on the 'net I thought I'd give it a go. Rather than waste some fabric if I didn't like them I decided to use a pair of Husband's jersey PJ's that he no longer wears, There was just the right amount of fabric to cut out the legs from the pj legs, then I used the co-ordinating t-shirt to cut the waistband, pocket edges and the cuffs.  I really like this pair and would make them in again jersey.  The second pair - hhmmm, not so sure about these. They are also made from Husbands cast-offs - this time some Boden lounging trousers. These are woven and totally the wrong fabric - it is thickish and stiff with no drape at all. I left the cuff off. I haven't worn these once other than for photos, which probably says it all. I think in a softer drapey-er fabric they would be lovely...

Purl Bee City gym shorts x 3
My girls like to wear shorts under their school skirts. For Middlest I had whipped up a jersey pair using a pair of her leggings as a guide. That was fine, but I realised that she was also using another pair of shorts as an alternative. This was a pair of Primark's finest, quite sporty in cut and using a thin silky fabric.  I had been checking Kollabora at around the same time and seen quite a few of these City Gym Shorts which is a free pattern from Purl Soho. They looked to be pretty similar to the Primark shorts so I offered to whip some up. I used a couple of Husbands old work shirts, again if the pattern didn't work or the girls didn't like them it wouldn't be a waste of 'good fabric'. I used the Women's sizes for both girls (aged 9 and 13) and found that the pair I made for Youngest didn't fit at all. I inserted a panel between the front and back pieces and she likes this better than the original. Middlest's fit ok, but they both said that they got a bit of a wedgie at the back - but not enough to not wear them.
I then made another pair, possibly for me, out of an old White stuff skirt that no longer fitted me. I scooped out the crotch curve a bit at the back on this pair, using the Hudson Pant pattern as a guide. Eldest saw them on my sewing table and asked who they were for.  I said she could have them if she wanted and they promptly disappeared (I don't currently have a photo of this pair).

Self drafted skirt
This is again using one of the patterns drawn up in my class. I wanted a shortish linen skirt with a little kick/flip at the hem. I used a pattern for an eight panelled skirt, but mashed it together to make it four panelled. It kind of worked, but I didn't quite get the flippiness I wanted. It's close enough though. Because most of the ladies in my class are beyond 'a certain age', all the skirts that we drafted are very modest in length. To get this skirt the length I wanted, I had to take out nearly 6 inches/15cm and could probably have taken a bit more. To keep the flare, the length taken all came from the area between the bottom of the pocket and where the flare started. It sounds more complicated than it was - I basically folded out the excess and hoped for the best!. I am very pleased with it and have worn it a lot.

Sad summer
Amongst all of this I have had other things to think about - namely I was diagnosed with Breast Cancer in May. Since the diagnosis I have sentinel node biopsy as part of a research project, a lumpectomy and sentinel node removal operation including repositioning of my nipple to keep things looking nice in the future, a contrast MRI to check for signs in my other boob, and a further lumpectomy to remove cancer cells that were not removed in the first op. This is probably not the best time to be writing this as it is not even a week since the last operation and I am feeling pretty wobbly about the whole thing. The nice tidy job that was pretty much healed and looking ok, is not looking quite so tidy now. The surgeon said I will probably need some sort of reconstruction at some point, but we get the results from this op next week and then we will find out what the next stage of treatment will be. I will keep sewing as I find making stuff is important to being me. There may be more selfless sewing, although I think I am pretty good at that! I am not sure what effect the next stages of treatment are going to have on my body so I don't know what I will be sewing for me - I may just move the focus away from my top half and make a few more bottom half items - who knows.
Posted by Tamsin at 22:16