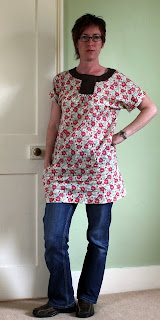 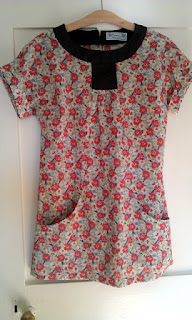 Well, if you can't beat'em, join'em. I have followed the world and made myself a Lisette Portfolio tunic. Having seen some fab renditions of this, most notably Karen from Didyoumakethat?, Roobeedoo's versions here, here, and here and Nadines stripey number, I was beginning to think my Autumn wardrobe would not be complete without one.

Just before the school summer holidays, I met up with my great friend for lunch at Blake House Craft Centre about halfway between Saffron Walden and Chelmsford, where we found And Sew On Fabrics. I had a happy time poking around and came away with a few samples and quite a few ideas. Later on, during one of the summer's less summery days, I persuaded the family to come out for a drive (with the lure of cake at the tea rooms) and came home with some lovely flowery cotton lawn, some chocolatey brown linen poly mix, half a metre each of red cotton and blue cotton, and a metre each of differing camo fabrics (possible later post on this one!). Unable to concentrate on much sewing during the holidays, I embarked on this make once everyone was safely back at school.

I had decided that I was going to have the contrast neck band, yoke and sleeve cuffs hence the purchase of the blue and red cottons. I spent some time holding the fabric up to me in front of the mirror trying to work out which of the two colours looked best on me. The blue was the best match to the blue in the main fabric, 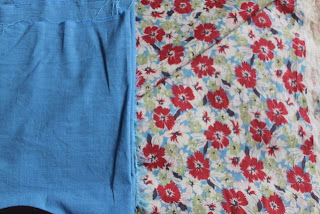 the red looked better next to my skin but didn't really go with the red of the flowers, and both of them looked pretty awful on me. 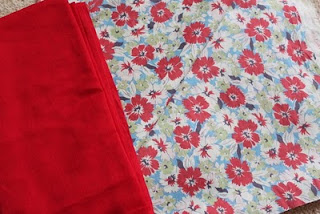 I really wanted to to use some of the brown linen poly mix but then remembered that I have a pair of brown linen trousers that had never been very comfortable, and I had put to one side to pass on to my sister. These turned out to be just the right colour and weight for what I wanted. I could only get the neck bands and yoke out of the trousers - however I played with it I could not squeeze the cuffs out as well.

One evening, when I was too tired to understand the instructions for the sleeve cuff, I found a post on this blog, which gave pointers to the
Sew Lisette website,
a SewLisette flickr group and
a Portfolio dress sewalong,

all of which provided great distraction from actually sewing my own and the sewalong was very useful athought not for the cuff! I had not really taken in what I was supposed to do on the cuff, but when I went back to it, it all became clear, I had just been too fatigued!

Apart from my incomprehension re cuffs, the tunic came together nicely and I'm really pleased with how it looks. I had great fun playing with self covered buttons, which stand out nicely on the neck band 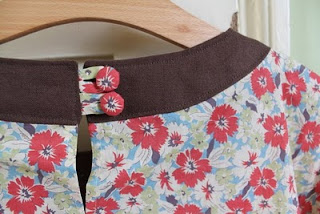 and I love the pockets. 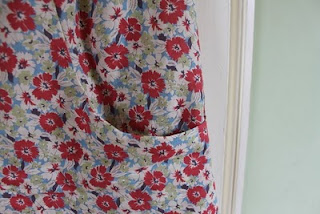 I am wearing it over jeans in the photo, but plan to wear it with leggings, boots and a polo neck jumper (according to Woman's Hour this morning, this will be very 'on trend'!) in the winter.
Posted by Tamsin at 13:34