I mentioned in a post back in March about a quick project I had started - some cushion covers to spruce up a couple of sofas. 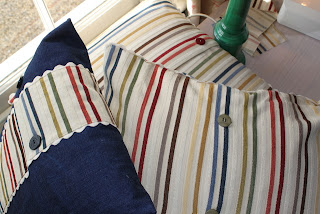 I finally finished them in time for Halloween.  They were done in a rather adhoc way (I laid the cushion on top of the fabric and hacked away), but I did try to make them pretty!

The first one, which took ages and clearly put me off continuing with the rest, has giant ric rac on all four sides.  The second only has ric rac on two sides - much easier! 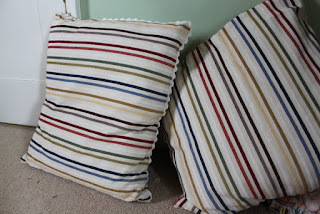 I thought I would have enough to cover a smaller cushion, unfortunatley I was out of luck.  I had a rummage and found some denim left over from my Denim Portfolio Dress, then added a strip of the stripey fabric and more ric rac.

I bought a selection of buttons at the same time I bought the material, but by the time I got round to finishing them, I couldn't find them.  I bought a new selction of buttons, hoping that the first lot would turn up, but they haven't yet!