This top first appeared in MMM13 and is a top that I started during a quiet patch in the Wedding sewing.  I had a short period of time where I couldn't do much on my sister's dress until she had tried it on.  She very kindly, at my request, bought the February issue of the Burdastyle magazine for me as my local WH Smiths doesn't stock it. I had had a flick through on previous trip, and dithered about it, but I kept thinking back to this top and a couple of variations in the magazine. 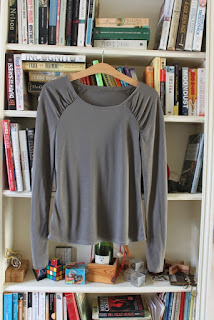 I used a slinky, olivey sludgy grey viscose jersey which I bought in Goldhawk Road towards the end of  2011. I think I had a little over a metre but it was very wide and managed to squeeze the top out of it. During this quiet patch, I cut out the top and gathered the appropriate section of the sleeves. 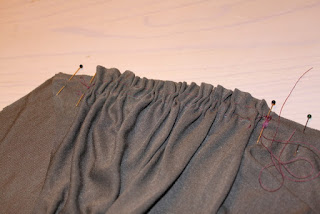 Wedding sewing picking up again, so this was put to one side for sometime. It was a reasonabley quick sew taking a couple of evenings . I started sewing it on my overlocker - I sewed one sleeve piece onto the back, and then reverted to sewing the rest on my sewing machine and just finishing the seams on the overlocker. I was a bit nervous about making an mistake with the blade down and the jersey was so slinky I felt I couldn't control it through the machine properly.  I ended up sewing most of the seams with tissue under the fabric to stop the sewing machine eating it up.

I sort of followed the Burda instructions, known for being on the incomprehensible side. By which I mean that I did what I thought I should do, read the instructions, thought 'oh good, done that bit then', and moved on. The neck was a bit more tricky. I read and reread the instructions and then used Melissa from Fehr Trade's instructions for putting on a neck band as described in her post about the top she made from this pattern. 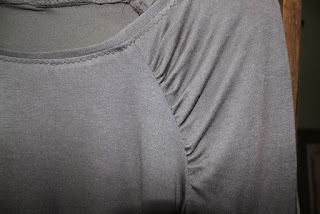 I never know at this point, whether to do the top stitching of the neck band with a zigzag or straight stitch.  The neck is wide enough that it doesn't need to stretch over my head, so maybe next time I'll try a straight stitch.


I had noted from Melissa's post and a couple of other people's that it was very long in the body and sleeves.  I really like long sleeves, so thought I would wait and see on the length of the body.  Having done everything except the hem I tried it on and was initially very disappointed.  It made me look a bit frumpy and matronly (Ohhh, Matron!!). I then showed it to Husband, who took one look at it and said 'there's something wrong with the length'. As soon as I tucked the hem up and had it at hip length rather than top of thigh length, it made all the difference.  That difference was roughly 10cms, possibly more. If you look at the picture below, the original length would have been to the bottom of the back pockets.


I have worn it a lot, although it was mostly covered up during May due to the miserable and pretty cold weather that we had. I recently packed away my winter wear for a couple of months, but I will be keeping this one out to tide me over on cooler summer days.

When I joined Rachel and all the other sewists for the epic London meet-up, I found another bolt of the same stuff (or possibly even the same one) and nearly bought some more. Instead I found some brown and sparkly striped jersey knit especially to repeat this top for the autumn. Look out for the next one (with my record it could be some time!) 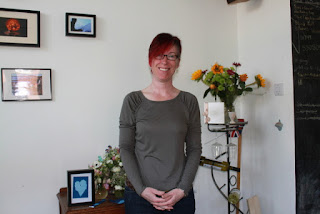