Here is the catch-up of all of my un-blogged makes from 2013. Here's to getting things up here a bit more promptly!

I used Newlook 6749 to make this. I realise writing this that I had started to draft a blog post about this but I ran out of steam half way through! Initially I said that I didn't want to make the bridesmaid dresses as well as the brides dress. Fortunately my mother-in-law is a very good seamstress and had offered to any sewing that my sister wanted doing. Seems an odd arrangement but my m-i-l actually met my brother-in-law sometime before I did! My sister and I had decided that the 2 older girls would wear the same style dress as me and Youngest would wear a sparkly number from a shop to match with the other little dot who was the last bridesmaid.

I traced off a size 6 for Eldest thinking I would do a tissue fit.  Which I duly did.... and it was too small.  I ended up doing the tissue fit again on Middlest which worked out fine, if a little long and a bit big in the chest department. I ended up tracing off a size 10 for Eldest. Having done all this, and having quite a lot of floor space, I offered to cut out all the dresses and mark them up for my m-i-l.  Having reached a hiatus in the Wedding Dress, I then decided to make my dress, so that m-i-l only had 2 to make.


The dress was silk dupioni with a nice slubby texture and was great to sew. It was also great at fraying and instead of following my own advice to overlock all the edges before I started sewing (which m-i-l did) I carried on regardless. This meant that a couple of pieces were a little smaller than they should have been, but it wasn't too disastrous. I think I made a couple of small adjustments to the bodice around the sleeve and neckline. The dress would have fallen off my shoulders due to the extremely wide neckline, otherwise. M-i-l had to do the same for the girls. 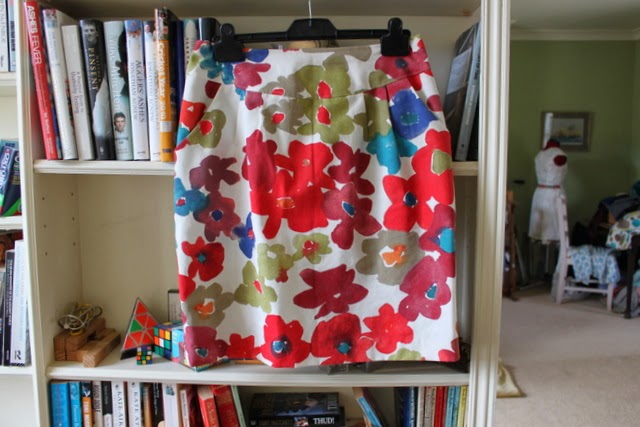 Easily my favourite of 2013, not to mention many of the sewing blogosphere.  I have had the pattern for well over a year, and I bought the fabric this time last year, going by my photo records. The material is from Ikea and I bought it with the plan to make a Sewaholic Cambi (which I did...) I cut both out at the back end of the summer and finished the skirt in mid to late October.  I wanted it to be wearable for as much of the year as possible so winged lining it. Only one major mistake - can you spot it? I have, as I hoped, worn this a lot, but failed to get a photo of me wearing it. It goes with many of my tops which makes a seemingly garish skirt quite versatile. I often wear it on miserable days just to have something jolly to look at! 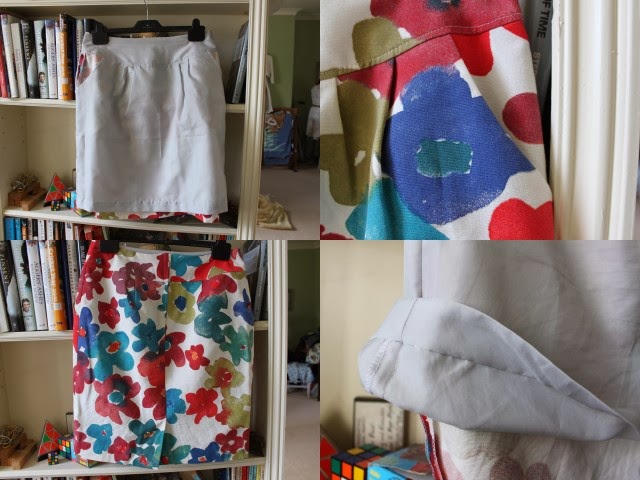 Made from the same material as the above skirt. I was very patient with this make - I even made a muslin which seemed to fit fine. The construction took for ever. I made it in fits and starts, had to wait for a zip to arrive (I ordered 3 as I couldn't find a proper match just going on the computer screen colour).
I have only worn this once so far, out to dinner at Launceston Place, for my wedding anniversary. 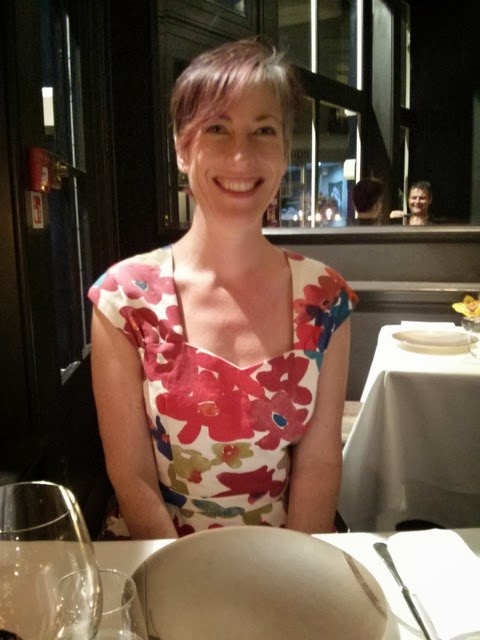 Unfortunately it is just fractionally too big. Enough to be noticeable and slightly distracting when wearing it. It is too cold and inclement to wear it at the moment, and I may get round to tweaking the fit. It is too big under the arms and in the bodice, which means it shifts around slightly and gapes at the bust.  I also feel slightly twee in it. I'll see how I get on in the summer.

An exact remake of the top I made for Eldest for Christmas2012. As predicted, she grew out of it almost immediately. I bought the same material and promised to make at some during the year. It ended up as a Christmas present for 2013 and the same size as I would make for myself. No picture of the current version.

Husband's Christmas shirt #3
In the run up to Christmas, I made Husband a Stratconna Henley blogged here, which looks good but is a bit too snug for his liking.  We already have fabric another that is washed and waiting to go, but I wanted to make him another shirt. I read something the other day that said if you do something 3 years in a row it becomes a tradition, so I think this might be my tradition. I bought the fabric at the traveling Geoff Rosenberg fabric sale that comes to Trumpington village hall every month. It is 100% cotton, very fine and I think it might be lawn. Husband says that it almost feels like he is not wearing it. 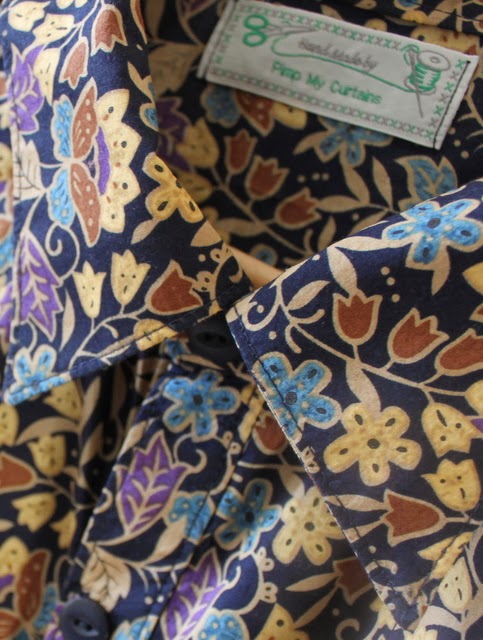 I used the McCalls 6044 again with the adjustments from last year (smaller size and 5cm longer). The fabric was a dream to sew. I had hoped to follow Carolyn's flat fell tutorial for the sleeve this time round.  I found the tutorial, had it open on the tablet next to me, read it through and thought I knew what I was doing, then promptly trimmed the wrong side of the seam allowance - duh.  I also got completely confused when doing the cuffs and got the buttonhole on the wrong side.  Husband came up with the solution to put another buttonhole in the RIGHT place so that he could wear it with cuff links, which he doesn't get the chance wear very often. 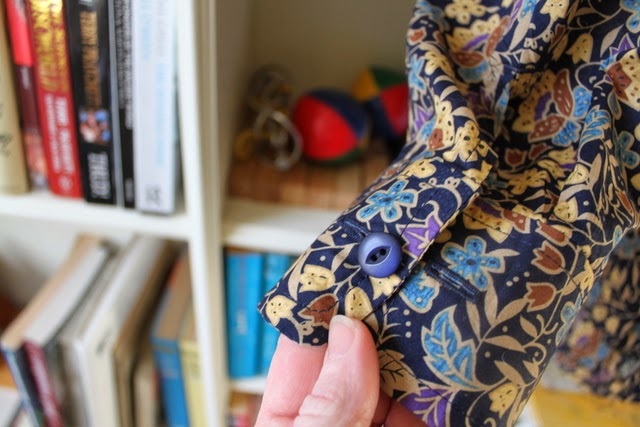 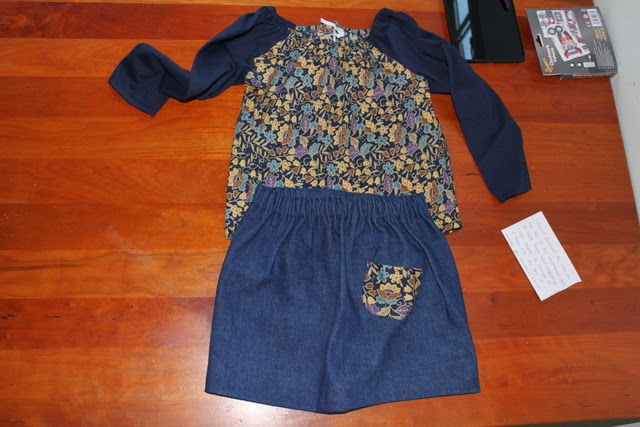 One of my friends has a very sweet daughter who is rising 4, and reminds me very much of Middlest when she was a similar age. For some reason I decided to make her a little outfit as a Christmas present. I made a denim skirt with a patch pocket, and a little long sleeved top using Simplicity 9603 (which is no longer available) as the basis, all from scraps from previous projects. the top was not what I had when I started at all, but was the best way to use the fabric I had. 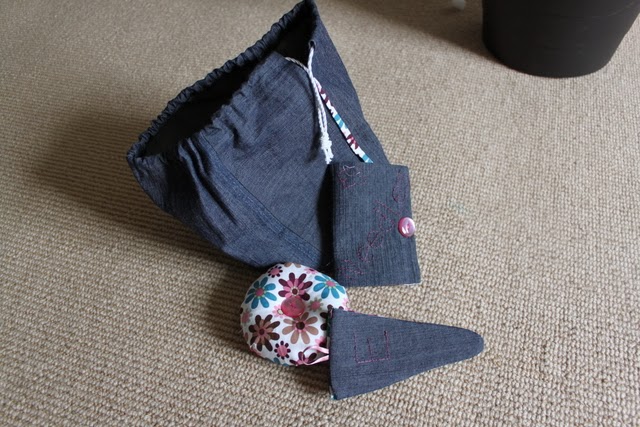 Sewing bag, needle case, pin cushion & scissor case using denim and and scraps from stash.  This set was for  Eldest as a Christmas present. I made another for my friends elder daughter.

Don't forget I will be giving away the Burdastyle Sewing Handbook very soon. To enter the giveaway please comment on the original post here and I will put names in a hat on Friday 24th January.  Good luck!
Posted by Tamsin at 21:39