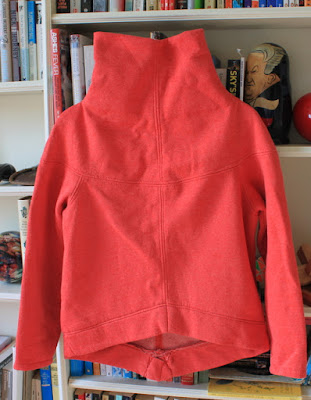 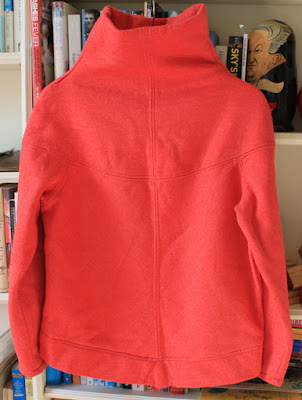 So not everything that is made is a success. This top was a disaster almost straight away. The fabric is a lovely coral coloured cosy fleece backed sweatshirting material, bought from Geoff Rosenberg. It would have been ideal for a hoody or zipped hoody or tracky bottoms, but definately not this top.

It is a Burdastyle slouchy raglan top which looked great in the magazine. Catherine Daze had made it and it looked good on a real person, so I thought I would give it a go. 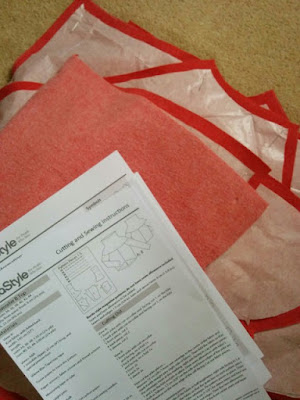 I downloaded the pattern and cut a size 38 (I think). I basted it together, and honestly it looked like the top was wearing me! I looked like I had an oversized spacesuit on. 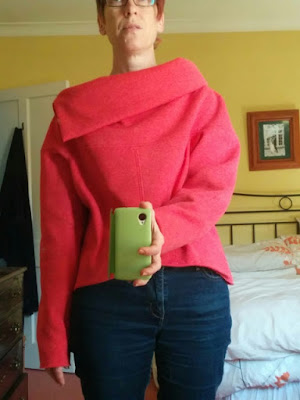 I took a massive vertical dart from both the front and back yoke pieces to try and bring the shoulders of the top somewhere near my own.
I also decided that I wanted the top to be longer so added a band at the bottom. This was foolish in the extreme given the shape of the hem and I somehow managed to mess up the all the seams on the band.


I have worn the finished result, but it is not drapey relaxed top I had envisaged. Having gone through all these pictures and not having any of it on me in the completed state, I might have to give it another chance before I give up on it completely.

To try and redeem my sewing I went to the next Geoff Rosemberg sale and managed to get the last of the bolt of the same fabric.  This time I was planning a reasonably straight forward raglan sweatshirt using a pattern that came with a sewing magazine - Newlook 6230.

Having checked the finished garment measurements and taking into account the thickness of the fabric I made a size 14. When I tried it on I realised that the neckline was far too wide. Had I done any sort of internet reasearch I would have come across this problem and dealt with it before cutting into the fabric. It would have been too wide as a t-shirt let alone a warm sweatshirt. I managed to add on extra fabric at the neckline and improve the fit of the neckband, but all in all this was pretty much a disaster as well. 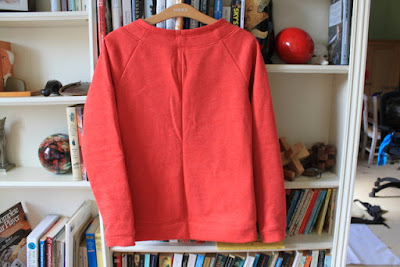 I haven't worn this top much either, although it was a vast improvment on the Burda one. I think I have just had enough with that fabric!

These two just show that even though I have been sewing for years now, it is still possible to make mistakes and that, 9 times out of 10 the choice of fabric is key to the success of the project.  What have you learnt from recent sewing?