Early in the summer I made a jumpsuit by another pattern designer and surprised myself by really liking it, so when it came to choosing the last of my Simple Sew makes for 2018, I thought that I would go for the Cara Jumpsuit and make it in a rather nice dark teal stretch velvet that I already had in my stash - perfect timing for party season.

The pattern would have been pretty straight forward to make up had I not changed several things while I was making it. I did note that there is no information on the pattern envelope about requiring bias binding. Luckily I read the instructions before I planned to start so was able to to go and get some the next time I was in town.  If I had started this without reading the instructions first, it would have been very frustrating.

Because of my choice of fabric some parts were trickier than they would have been in a thinner fabric. Turning the tubes to create the ties was the first thing I did and turning stretch velvet in to tubes is not to be recommended!
Attaching the bias binding also took a while and I didn't want visible stitching on the outside of the garment, so I did a lot of hand stitching on this step. 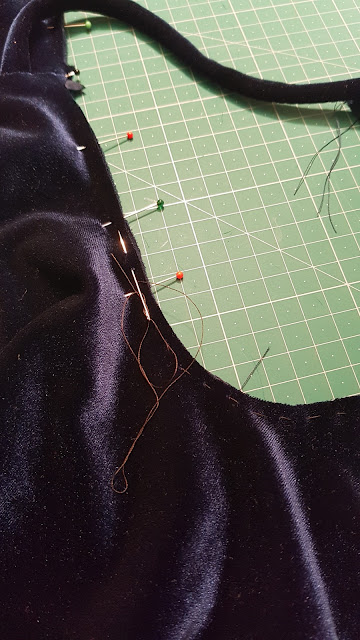 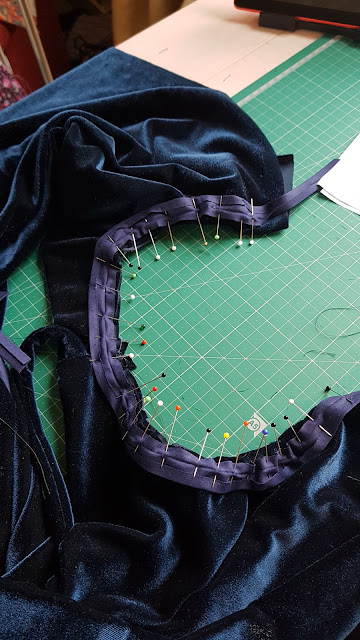 At some point in the construction I thought it might be a good idea to have some pockets, so I used the pocket piece from the Lapwing Trousers to create in-seam pockets.  I cut the pocket pieces from some lining fabric and then spent some considerable time trying to sew the pockets in. Because of the nap of the velvet and the slipperiness of the lining fabric, every time I tried to sew in the pockets they shifted.

When I did a baste fit of the whole garment the pockets ended up too far down my leg every time and I must have done them about 4 times!  I decided that that was enough and just cut them out and sewed the side seams up as I should have done in the first place! They were such a disaster that I didn't even take any photos of this bit. In retrospect I should have altered the pocket pattern piece so that it would attach at the waistband as well as the side seam, then there would have been less shifting down the leg.

During baste fitting, I also decided that I didn't  like the length or shape of the bodice on me and decided to separate the top and bottom again. The easiest way to do this was to just cut the waist channelling off  - no faffing about trying to unpick overlocking on this fabric!
I finished off the trousers by creating a waistband for elastic from some spare fabric - basically just a rectangle of fabric that was the same length as the waist on the trousers, double the width of the elastic I wanted to use plus seam allowances.  I joined the rectangle at the short end to create a loop, folded the loop in half along the length and attached the raw edges to the trousers leaving a short section unsewn so that I could feed the elastic through. Having fed the elastic through the waistband and got it to a comfortable length I joined the ends and then finished sewing the waistband. Again, no photos of this bit, but the waistband technique is detailed in the True Bias Hudson pants sew along.

I then tried the top on on its own and decided to take the sides in. I basted this step a couple of times until it looked how I wanted.


So this ended up being a two piece outfit. I will wear both pieces together as a faux jumpsuit, but I thought the versatility of separates might mean that it got worn more.

I had thought, at one point in the construction, that I would be able to wear this to the New Craft House Christmas party but that wasn't to be. I have yet to wear this as it turned out too fancy for both our Christmas and New Years celebrations, but I have plans for the Dressmaker's Ball in March!
For now here are some finished photos in multiple locations trying to get decent lighting and representation of colour... 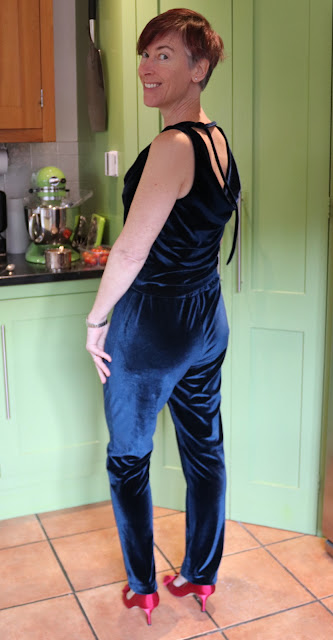 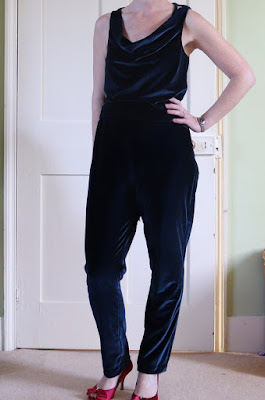