After getting the quick make cushion cover out of the way, the attention span got a bit better. I had all the Pendrell pieces cut out and ready to go, so I set about transferring all the markings. I was taught, by my Mum and in Home Ec, to use tailors tacks for this task, which I duly did, but 16 tailors tacks in each sleeve...... that's a lot of tailors tacks. I think I need to invest in some chalk or something!

I didn't take any construction pictures, and found it relatively easy to put together. I had to do a bit of unpicking and re-sewing of seams, just for silly mistakes where I caught some of the fabric in the seams. I also redid the neckline at least once. I did a much better job on the muslin! I have seen several people on the web commenting on how easy Tasia's method for finishing the neck and arms is. I have to say I found it super fiddly - but it might just be my machine's inability to sew slowly. I'm thinking of making another Pendrell with something from my Goldhawk Road haul, so I'll give it another go. Having had a play with my overlocker on my cushion cover, I used it to finish all the seams, which I'm very pleased with.

I stayed up late on the eve of the Fabric Fandango, in order to finish the Pendrell for its first outing. I wore it with a pair of pink linen trousers (Boden) and a denim jacket, so there is only a peek of the top in the photos of the day, but here are some different shots: 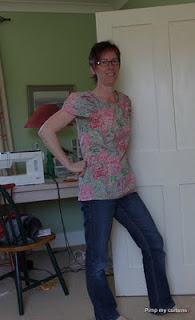 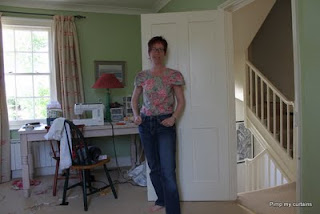 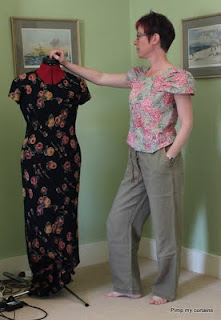 Now that I have worn it a couple of times since, I think there is too much fabric in the upper chest area, which may mean I need a narrow chest adjustment in the future. I might just make a smaller size and maybe use the cap sleeve from the ruffley version. I not going to do anything to this version, I like it too much and I don't want to mess up a completed project! I am also looking forward to it being warm enough that I can wearing this without jacket of some sort - the sleeves get a bit rumply under a jacket.
Posted by Tamsin at 12:52