This post is somewhat overdue, I was having problems on Blogger, which lovely techy Husband has solved for me!

Some time ago (May 2011), I bought some gingham to make a muslin for a shirt for husband: 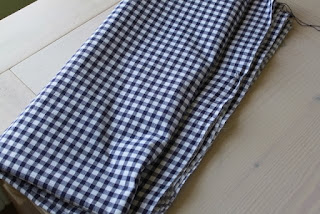 I cut the shirt out sometime in June, using McCall's 6044, and then it stayed put for some time. I vaguely remember promising to make a shirt for Husband whilst we were still in New Zealand (and we even chose some material during a trip to Wellington), so I thought that I would try to get a muslin underway before Christmas.

I interspersed the sewing of this with my Denim Portfolio dress, so that I wouldn't get bored with either project and I could swap between my sewing machine and overlocker appropriately, in theory.

This shirt was supposed to be a muslin, so I basted it together to assess the fit. Once Husband tried it on, we decided that it didn't need anything in the way of alterations, so I decided to make it a proper shirt. I did not take any construction photos, unfortunatley, but I did decide to make it a little different. I have often admired the shirts that Carolyn has made for her husband and sons and have thought in the past, that I would steal her idea of diagonal buttonholes.

I didn't do that on this shirt, but instead used bright yellow bias binding to make certain features pop. I emphasized the front button placket, cuff, and pocket, which even though I say so myself, looks pretty good! 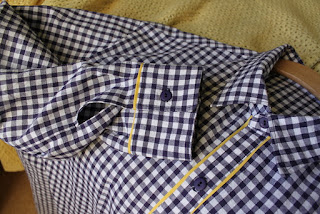 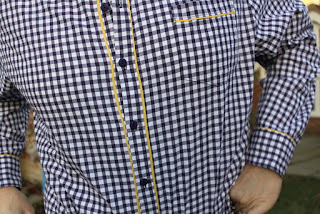 I'm not sure why I had such a colour hidden away, but it may have been something to do with this!

Husband expressed a desire to wear this for Christmas day, which I was well on course to accomplish, until taking to my bed with some horrible illness, on the Thursday before Christmas. By Christmas eve I was just about upright, and managed to sew on the many buttons, and wrap up the shirt. Any grappling with machinery was not on the cards, so the card on the parcel read 'I owe you one label and some seam finishes!'

My girls were keen to buy buttons that looked like pencil sharpeners as Husband likes properly sharpened pencils. Unfortunatley, even though the shop had the perfect matching blue, they only had three and I needed nine - shame.

So, this now has the label and nearly all the seems finished (two more to do).  Yes, I know they should have been done as I went along, but it was supposed to be a muslin, and I got carried away, and I wish I had done them earlier, but hey ho... Once we get heating back - the boiler is being replaced and hot water tank moved - I will venture back into the sewing room and finish it completely.  It's a little fresh up there at the moment.

The shirt tucked in: 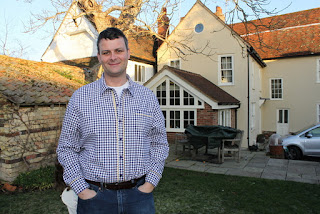 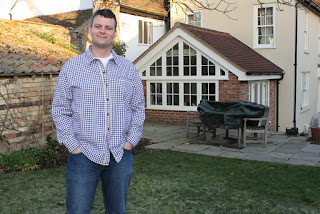 I'm pretty pleased with this, and I'm fairly sure Husband is too! The shirt got lots of comments (all positive) from family over the Christmas period.

For my reference, if I were to make another one, we decided that it would need to be a bit longer in the body to maintain it's ability to stay tucked in.
Posted by Tamsin at 22:45