Catching up with blogging - Bjorn Again

Me-Made-May has highlighted the fact that I have several items that I made a while ago that I haven't blogged.  I started a post about several tops that I have made, which was just going to be a short post, with a brief overview of each top.... The brief post became epic, so I have split it into individual posts after all. Here is the first post starting with the oldest and silliest top in the group!

Something silly for Bjorn Again

An Abba tribute band, came to my local town last summer .  Apparently people often dress up to see them so I thought I would join in, although I was the only one in my group to do so,  I have had these somewhat garish trousers for 20 years - they glow slightly in ultraviolet light - they are hideous but at the same time great! I never know what to wear with them, so thought I would knock something up.  I just happened to have some bright pink polyester chiffon in my stash (as you do), which I thought might be appropriate! 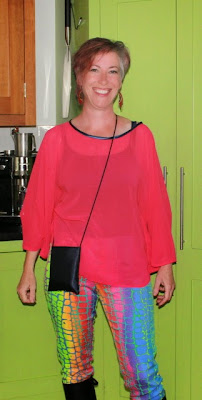 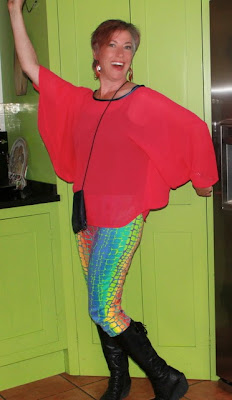 The top is pretty much a circle with a hole cut for the neck. I bound the hole with some satin bias tape and sewed two lines halfway up the semi circle to create a space for my body and sleeve areas. It was just the thing for a silly night out and my friends couldn't believe that I had made it!